The design I'm working on now has been titled "Magic" because that was the prompt word from Illustration Friday that it was based on. In its incarnation as a woodblock print, though, I think I'll be renaming it and calling it "Heaven On Earth."

Today I carved three of the five 9" x 12" blocks I'll be using. I decided to show them to you with the hanshita (sketch) still pasted on so you can see a bit more about how the carving happens. 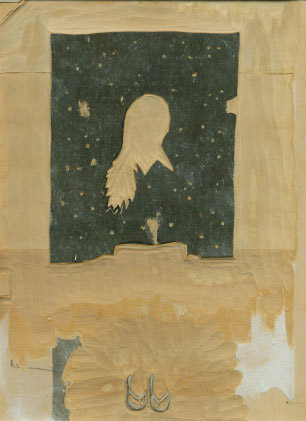 Here on Block 1 you can see that the hanshita, which in this case is a black and white laser printout of the original digital illustration, got a little beat up in the process of carving. There are several tears in the paper, but it's OK because I got everything carved before it ripped! Also note that I've carved the dark blue sky and the red sandals on the same block. Multiple colors can be put on the same block as long as the two elements are far enough apart that they can be inked separately. The two colors are not printed at the same time, but in separate passes. 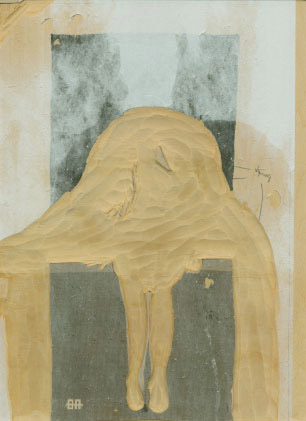 In this second block you can see that the entire block doesn't have to be carved. lt's only necessary to carve a large enough area around the printing part of the block that it can be easily inked. This block will be printed in a purple-pink color. 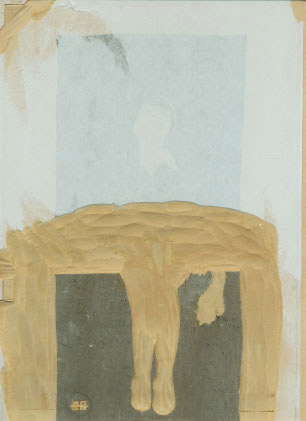 Block 3 will be a medium dark blue, overprinting most of the area that will be the wall. Again, the paper ripped when I was clearing some large portions of wood. Carving my "chop" (my signature) was difficult. I had to use some Super Glue to repair it. Two more blocks to go.
Posted by Annie B at 9:41 PM