Just back from a short but rejuvenating trip to Cape Cod. Nothing like the ocean to calm the nerves and feed the soul.

Looking over my emails when I got back, I saw an announcement about an exhibit currently showing at the Center for Contemporary Printmaking in Norwalk, CT: 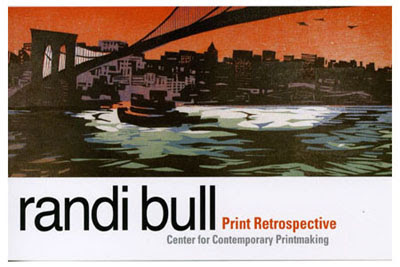 Of course I wanted to see more of her work, but I was stopped short when a Google search revealed almost nothing more about her. It showed me how much I rely on (and expect) the internet to contain information on absolutely everything. It was good to be reminded that it doesn't. 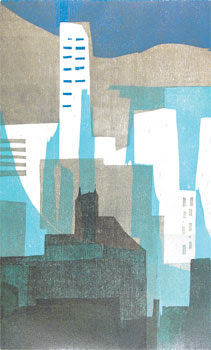 And this blurb from The New Canaan Advertiser:

Ms. Bull moved to America from Norway as a baby and grew up in and around New York City. She began printmaking in the 1950s, and when she pulled her first woodblock print, she realized that this would be her preferred medium. She was already an accomplished printmaker when she encountered Japanese woodcut artists and their tools — the knives, gouges and baren.

She applies oil-based inks, rather than the water-based inks traditional in Japan, to the carved blocks, a separate block for each color. Then she places paper on each block in turn and rubs it by hand with the baren, a flat disk covered with a bamboo leaf. For greater definition, she uses a wooden spoon to strengthen a line or particular area. Because each woodcut involves so much meticulous handwork, she limits them to editions of 35 to 50 prints.

“I like everything about making a woodcut. I like the knives, the feel of cutting the wood, the white of the paper, the wonderful colors, and the luminosity the white paper and the black key block give. I like the shapes which materialize when you cut freely, both the shape you cut out and the shape that remains. I like the struggle with the grain of the wood, the fact that it has a life of its own. I like the step-by-step working out of the final print and the exciting transparencies of color over color. The logical or sometimes topsy-turvy solutions at times are quite different from the initial plan of colors. I love the mystery that arises when a print suddenly seems to work.”

The exhibit is curated by Laura G. Einstein of New Canaan.

Center for Contemporary Printmaking is located at 299 West Avenue in Norwalk.
Posted by Annie B at 5:43 PM

Email ThisBlogThis!Share to TwitterShare to FacebookShare to Pinterest
Labels: art show, other artists