The last parts of this print came together quickly. The climbers, who were the first characters I knew I wanted to include in this print, were printed in two stages. Then I added a map of Coronado's journey and some of the tribes in the area, and finished it off with some rubber-stamped lettering for a few towns and pueblos that Coronado visited. 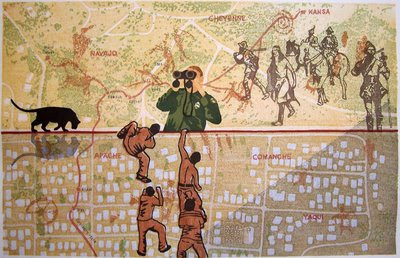 I used several different styles in rendering the various figures because I wanted it to look like a collage, the elements sort of cobbled together from different time periods and different worlds. As usual, I learned a lot about the topic as I worked, but in this case what I mostly learned was how complicated the issues around this border really are. It would have been easy to take an extreme point of view -- immigration is bad, or the Dept. of Homeland Security is bad, or the world is ending -- but my feelings ended up more complicated than that. Everyone is just doing their job, playing their part. The border guards are doing their job protecting American citizens from drug dealers, smugglers, terrorists and illegal immigrants, and the immigrants are doing their job hoping to make a better life for themselves and their families. Isn't that what has always drawn people to the U.S.? Isn't that hope for a better life the American promise, the American dream? What else but sheer desperate hope could make a person risk their life crossing a desert for a job?

I don't think the fence will stop people from coming into the U.S. via our southern border. I don't think there's any way to stop this flow. People migrate. People have always migrated. It's said that the native American tribes migrated to North America from Asia over the Bering Straits. Maybe those first Americans would have fared better if they had built fences when the Europeans started showing up, but I doubt it. People migrate. Rather than asking "How can we stop illegal immigration?" perhaps our policy makers should try a different question, like "How can we help our southern neighbors better support their own people?" or "How can we share our American dream while keeping our society safe and stable?".

I fear that as our climate goes through the upheavals that are predicted, we'll see global migration on an unimaginable scale. The underlying question every society seems to be grappling with right now is just this: Who is "us"?
Posted by Annie B at 7:47 PM

Beautiful print! I love the map in the background, and I love the last addition to the print, the immigrants jumping over the "fence", adds a sort of whimsical dimension to the image. Congratulations!

Congratulations Annie the print is beautiful and the explanatory note is great. The design is very strong.

So beautiful. The layering of textures and elements is gorgeous!

Nice nice print. Will you be selling it on Esty? If direct, what is the price?
Carol

Another beautiful, thought provoking print. Congratulations. The design is strong, the elements and explanation are perfect. It does resemble a collage, so you did what you set out to do. Great work!

Thank you so much for the great comments. Carol, I probably won't be putting this one up on Etsy. Feel free to email me: annie"at"anniebissett.com
and I'll be happy to talk about pricing.

Annie--I'm really stunned by your final print! When you first described this project I couldn't imagine how it would look. It's really quite wonderful! I admire your artistry and the tough political/social questions you tackle. Can't wait to see what you do for the next print in this series.

awesome ! I loved all textures and colours !

This is such a wonderful print. A really surprising composition - yet very logical. Such a complex issue too - we struggle with it over here too, although it's really quite minor for us due to our geographical isolation. As you guys say on the Statue of Liberty "Give us your poor, your tired, your huddled masses longing to be free..." ...and it's no wonder they want to come!

I'm appreciating your comments very much. I too was surprised at how this print came out, and I'm still... what should I say... integrating it. I don't have enough distance from it yet to do any kind of evaluation, but I've hung one of the artist's proofs on my studio wall so I can live with it and let it talk to me a little. Thank you for following along on this print's journey.

Hi Annie-
I learned about your work through the Zea Mays (where I was a brief member last year). Hope to attend you're workshop there in November as I will be back on the east coast soon...For now I am in the San Juan islands for the season, will have a chance to be in Seattle in mid-late September and saw that you are having a solo show there. Can you tell me which gallery and what are the dates? I would love to meet you. Thanks, Avery
averyemiller@yahoo.com

Hi Annie, I've been absent for awhile and just now peeking in, a beautiful print to greet me! wonderful, thoughtful work as always, congrats!

Hi Avery, I look forward to seeing you at Zea Mays in November!
Welcome back, Cin. You're a sight for sore eyes :-)