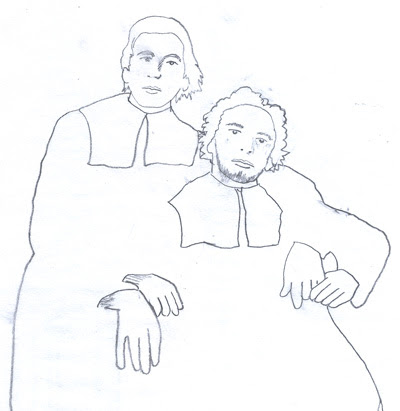 I'm starting a new print that will be the last one (at least for now) in the Pilgrim series. It's a portrait of John Alexander and Thomas Roberts, two men who were lovers in Plymouth Colony in the 1630s.

We know about John and Thomas only because of court records from their prosecution. Here's the account in full:


John Alexander & Thomas Roberts were both examined and found guilty of lewd behavior and unclean carriage one with another, by often spending their seed one upon another which was proved both by witnesses & their own confession; the said Alexander found to have been formerly notoriously guilty that way, and seeking to allure others thereunto. The said John Alexander was therefore censured by the Court to be severely whipped, and burnt in the shoulder with a hot iron, and to be perpetually banished from the government of New Plymouth, and if he be at any time found within the same, to be whipped out again by the appointment of the next justice, &c, and so oft as he shall be found within this government. Which penalty was accordingly inflicted.

Thomas Roberts was censured to be severely whipped and to return to his master, Mr. Atwood, and serve out his time with him, but to be disabled hereby to enjoy any lands within this government.

That's all we know. But what it says to me, a homosexual 21st century American, is that we've been here since the first boats arrived. That makes me proud. It also says to me that even the harsh Puritan penalties against homosexual activity weren't enough to stop these men from being lovers. 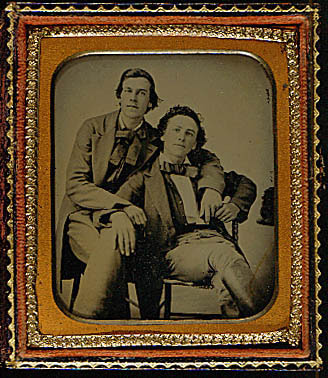 I used a photograph (above) from an exhibit called Dear Friends: American Photographs of Men Together, 1840-1918 for my initial sketch. The photo is obviously from a much later time period, but I like the posture very much. In my redraw I blended the clothing of the two men into a single shape to accentuate their hands. It will change more as I render it in wood.
Posted by Annie B at 6:48 PM

Annie, you inspire me. Thank you for your consistent, thoughtful commentary of our times through your beautiful prints.

Great tribute to all of our history, painful as much of it is. I am looking forward to seeing the finished block and print.

It is a very loving pose.

What cruel history we have among ourselves as humans on this planet.

Alas, let's hope we have discovered love as well!

Oh, it is already full of so much intrigue in just the hands. Annie, I'm always in awe of your work!

Annie, here is a quote that the drawing and comments bring to mind:
"Someday, after mastering the winds, the waves, the tides and gravity, we shall harness for God the energies of love, and then, for a second time in the history of the world, man will have discovered fire. "
Pierre Teilhard de Chardin

Annie, I'm eager to see the finished print. I do have a question from the court records. Was one of the men a slave? He's to be returned to his master?

You're a master at marrying historical events with your art. I love your work!

Thanks, all, for your kind comments and input.

Carol, yes Thomas Roberts had a "master." He was an indentured servant (time-limited service by contract) rather than a slave.

Nicole, thanks for stopping by. Wishing you safe travels!

Hi, Annie. This one literally hurts, in my body I feel the pain. I don't know how you do it! But thanks.

Thanks for saying that, Ellen. Your words made me aware that sometimes what I do is similar to the Tibetan Buddhist practice of tonglen - taking on the fear and pain of others in order to face it within myself and hopefully transform it into compassion. Good reminder to do it more consciously as I carve these blocks.