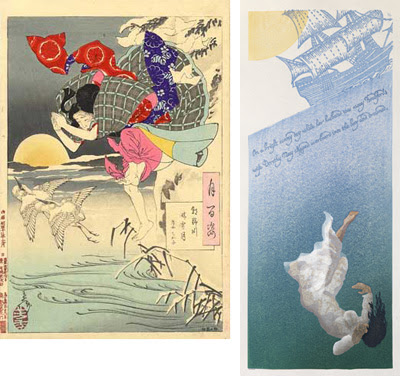 Late last month, Cullom Gallery moved to a new building in Seattle’s Nihonmachi (Japantown). The inaugural exhibit, called "Japanese Prints: Tradition & Influence," shows traditional Japanese prints from the 19th and 20th centuries alongside prints by contemporary artists who have been influenced by the styles and techniques of traditional Japanese printmaking. In the exhibit, gallery director Beth Cullom has paired my woodblock print about the suicide of Dorothy May Bradford alongside an 1885 print by Yoshitoshi, Moon of Pure Snow at Asano River, which depicts the suicide of a woman named Chikako.

Read more about the show on the Preview: The Gallery Guide web site.
Posted by Annie B at 4:08 PM

Interesting juxtaposition. They're both quite sad.

What an honor to be side by side with a Japanese master artist. I wish I could see the show!

Annie,
Nice coverage of what appears to be a wonderful exhibition. Your print is beautiful - the detail in the figure is amazing.

Yes... the yellow moons, the script, the water - even the birds wings and the sails

How astute of Beth C. to see the connections.

I'm in awe of Yoshitoshi since seeing the exhibition in Cambridge a few years ago. You can see the online exhibition here:
http://www.fitzmuseum.cam.ac.uk/gallery/yoshitoshi/index.html

Are you settling into your lovely new home?

What a great pairing! So interesting to see the similarities and differences. Congratulations on what sounds like a great show.

I think your print of the drowning woman is fantastic, evocative and entirely emotive. Can you describe/show the printing stages of this print? The delicate shading is something I am struggling with, and to juxtapose this skill whilst maintaining such emotional integrity is something I would be enormously interested in seeing. Thank you for your blog, as a new, a somewhat obsessive devotee to moku hanga, it is an invaluable resourse, Jane

Jane, in the very top left corner of the Blog page there's a search bar. If you type in "Dorothy May" and then click on the little magnifying glass (or hit "return") it will bring up all the posts that have to do with the making of this print.

Obsessive is a good trait to have for moku hanga.

What a wonderful juxtaposition Annie!
Your print holds up beautifully paired with the Yoshitoshi. So interesting that both pieces deal with the same topic in ways that are both different and yet somehow similar.

This particular print of yours has always been one of my favorite.

A good pairing I think, both subjects so sad but beautifully executed.