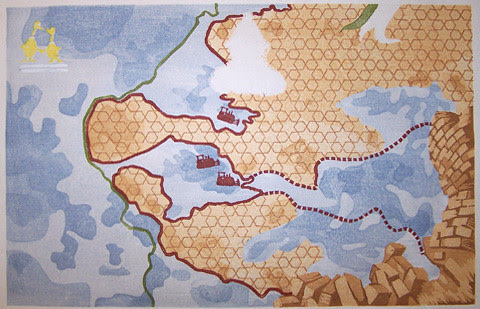 Today I printed a new block in red, outlining the location of the West Bank Separation Barrier in the region of Qalqiliya.

In 2002 the State of Israel adopted the plan to build a security wall along and within the West Bank. Supporters of the wall maintain that the barrier is essential in preventing terrorists and suicide bombers from entering Israel. In fact, since the erection of the Separation Barrier, the number of attacks has declined by more than 90%. Thus, the fence seems to be doing its intended job.

Opponents of the barrier object that the route substantially deviates from the Green Line (see previous post) into the "occupied territories" captured by Israel in the Six-Day War of 1967. They see the barrier as an attempt to annex Palestinian land under the guise of security.

Others object on humanitarian grounds, noting that the wall restricts Palestinians' ability to travel freely within the West Bank and to access work in Israel, isolating them in non-contiguous walled ghettos closely controlled by Israel. Qalqiliya, the area I've chosen to depict here, has been cut off on three sides by the wall. The single entrance to the town is an Israeli checkpoint which the 40,000 inhabitants must pass through whenever they come or go. In a 2004 advisory opinion, the International Court of Justice found that "the construction of the wall, and its associated régime, are contrary to international law."

There are other opponents, mostly Israeli settlers in the West Bank, who object to the wall because it appears to renounce the Jewish claim to the whole of the Land of Israel, including the entire West Bank.

In all the research I did for this print, I understood most from an interview with journalist Yossi Klein Halevi on a Speaking of Faith show that aired March 9, 2006. An Israeli Jew, Halevi poignantly described the struggle that many Israelis feel within themselves about their predicament. Speaking of Faith host Krista Tippett wrote the following about the interview:


Daily life, Halevi told me, felt like a crossroads between apocalypse on the one side and collective transcendence on the other. And he described a constant debate inside the mind and soul of most Israelis, not just between his country's "right" and "left." We struggle with our responsibility for the suffering of Palestinian society, he confessed. And at the same time, he insisted, we feel ourselves engaged in a life and death struggle to survive in a volatile Middle East that has declared war on us since before we were a state. In Jews, he said, whether secular or devout, this awakens a tension between competing biblical, ancestral commandments: to remember that your ancestors were slaves in Egypt and to care for the poor and the weak in your time; and on the other hand, to remember how the Amalekites attacked Israel after it crossed the Red Sea, when it finally felt safe, and never to let that happen again.

My next step in the print is to begin adding some "players" to this "stage."
Posted by Annie B at 9:48 PM

This is a totally powerful series you are doing. I just came back here to see what you were up to. Very moving and very timely.