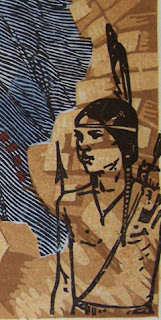 While I was working on some of my prints about the Pilgrims last year I came across an article (which I can't find now) about a delegation of native Americans visiting Gaza who found deep parallels between Palestinian life and life on a reservation in the U.S. Although I was unable to locate that article today, I found a different blog site about a delegation of young native Americans who visited Israel and Palestine in 2009. Apparently there have been a number of cultural visits by indigenous Americans to Palestine. From the Indigenous Youth Delegation web site:


For now, we have noted the similarities between the Palestinian indigenous experience and ours in the United States and Mexico – the massive agricultural destruction; settler tactics; the burning of lands, wreckage and deaths that precede occupation; land disputes; court entanglement; settlements; people having to work in settlements because roads/walls have cut through their lands and intentionally destroyed communities, families, infrastructure, agriculture, businesses…

I can understand the comparison of life in Gaza or the occupied West Bank and life in modern day Native America. But Jews also make valid claims of indigneity to Israel. There is an enormous body of archaeological and historical evidence demonstrating a long connection that the Jewish people have to the land.

Nevertheless, the population of Israel has never been monolithic. The area has been continuously settled for tens of thousands of years and a short list of the various peoples who have lived there would include Neanderthals, Hittites, Philistines, Hebrews, Assyrians, Babylonians, Persians, Romans, Arabs, Turks, British and French. Claims of indigeneity could authentically be made by a lot of different people.

I agree with the native American youth, however, that the plight of the Palestinians resembles the plight of America's native peoples.
Posted by Annie B at 7:55 PM