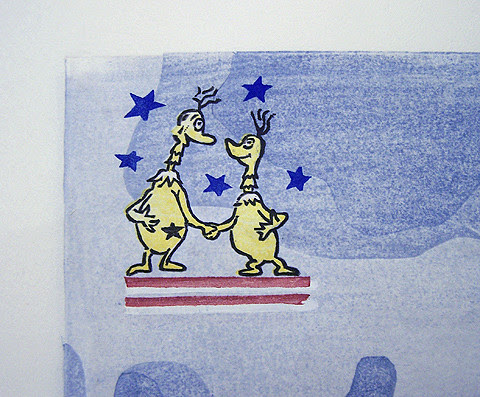 The last block for this print holds all of the characters and stories that I'll be overprinting on the map of Israel and the West Bank. Many will be Bible stories, but the first story I've included is one by Dr. Seuss. I first heard this story via Buddhist teacher Pema Chodron in a dharma talk audio I found on the internet. Here's Pema's version of the story:


Dr. Seuss tells another story about the Sneetches. The superior race, the ones that everybody aspires to be like and also the ones that everybody hates, are the Star-Belly Sneetches; they have stars on their bellies, and everybody else doesn't. One very clever fellow knew how predictable these Sneetches were, so he came in with a big machine that would put a star on your belly. All the Sneetches Without a star on their belly rushed in and came out with a star on their belly, but of course the original Star-Belly Sneetches still knew who and how superior they were. They weren't thrown by this at all. But to facilitate this very predictable situation, the same clever fellow came along with a new machine by which you could go in and get the star taken off your belly. So all the Star-Belly Sneetches went into this machine and came out without stars on their belly; the superior ones were now without stars.

The clever fellow kept these two machines going. Sneetches were running in and out, and the money was piling up, but after awhile all the Sneeches experienced shunyata. They didn't know who was who or what was what or who was a Star-Belly Sneetch and who was a non-Star-Belly Sneetch, so after awhile they just had to look at each other without labels or opinions.

From Start Where You Are: A Guide to Compassionate Living

Among other possible meanings, this story seemed to me an apt metaphor for the American-led peace talks that have been attempted over and over again with little success. I think it's difficult for Americans to understand that our particular secular melting-pot style of democracy is not always (ever?) translatable to other cultures and contexts. We tend to approach the middle east with a kind of "why-can't-you-just-get-along" or "why-can't-you-just-be-like-us" attitude that ignores the very real differences between the parties. America's insistence on a separation between religion and state makes us downplay the very real and powerful role that religion plays in nations such as Israel and other Arab states, which define themselves by their religious identities.

At one level, we are all the same. We are all human and what we want as human beings is universal: love, family, a feeling that we are safe, a feeling that we have some freedom to choose the kind of life we want to lead. But our very real differences have to be accounted for and heard and treated with respect. This is difficult enough to do on a personal level -- how in the world can it be done at a state level? I'm not saying that I know the answer. I'm just saying that American interventions in the peace process seem kind of sad and naive and ineffective to me.
Posted by Annie B at 10:38 AM

This is a very intersting story and a very good visuel element on the print indeed....and I am looking forward to seeing the finished of course.....and my respect to your views and your opinion on the issue...guess it is rather normal way of thinking...if they did like us, everything would solve.....but you are so right...big problems elsewhere is different and must be seen in a different context.....
I guess in Denmark we have this tendency also to think about our way of democracy and society is the right one...and we are scared of other ways of living while it questions your own....and our own way of living makes us secure in a way...even if we also see problems in our own way of democracy and the way society is organized it mekes us fell safe while it is what we know......
always enjouable to ffolow your thoughts and printing process.....

Sending your love and good vibrations....

Heh, heh, "stars upon thars"
Good reference. The day is coming soon that we realize we're all on this big (tiny?) globe together and that we can't continue to pee in our own aquarium for much longer.

Ha, ha Snitches are brilliant. I wouldn't have learned to read if it weren't for Dr. Suess.