Poor People I Have Known and Loved 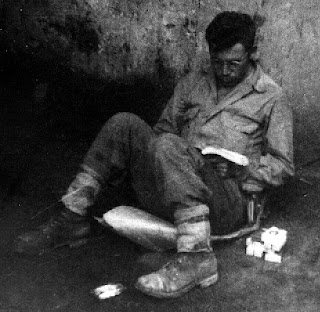 Economics is a mental topic. Money, which is just pieces of paper or metal or electronic bits in a computer, is imaginary in some respects. It's valuable because we think it is. It's a tool of the mind, a vehicle for making our dreams and imaginings come true.

I like the mind, and much of my artwork is idea-driven, but I need a good amount heart energy, too, to connect me with the work. So I decided that in order to do these next prints, which examine cliches that use the same imagery for both wealth and poverty, I needed to find an emotional point of entry. And there's nothing like family to pluck the heart strings.

My father, Harry Bissett, came from an impoverished family living in a paper mill town in northern New Hampshire. He was born in 1924, the 9th of 10 children. I remember he used to tell me stories of picking rags or blueberries to earn a little money, and of getting an orange once a year in his Christmas stocking. He barely made it through school (his teachers thought he might have been a little "retarded"), and he was an accident-prone child -- he fell out of a tree and shattered his arm, stepped on a nest of yellow jackets and received hundreds of stings, stepped in a pan of hot grease and scalded his foot. When he joined the army in 1942 and was shipped to North Africa and Europe for WWII, his mother sold all his belongings because she was sure he'd never make it back. 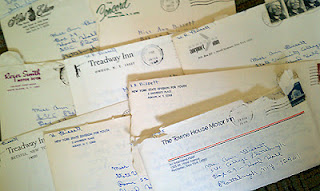 He did make it back, and he never spoke badly of his time in the army. The army gave him his first pair of glasses, which cured his low IQ score as well as his proclivity for accidents. And the army gave him a college education. He became a social worker because he wanted to give back some of what he had received. 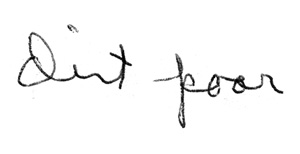 My father ended up working with at-risk youth for the state of New York and he used to travel around the state from time to time. I still have the letters he wrote to me from his business trips while I was in college. I scanned a couple of pages of his handwriting and recombined the letters to form the words I'll be using to illustrate the cliches of poverty. My dad died in 2000, but he's very present to me this week as I manipulate his handwriting for these prints.
Posted by Annie B at 7:36 PM

What a lovely story. I think I'd have liked your father.

so intersting to read about your father and he sounds like a great guy...and an interesting thought about that subject "money"...you have....your way of wanting to go into it now....a very interesting and difficult subject...and you have good views on it...:O) looking forward so see more on the subject...

Read it twice, thanks, Gerrie

This is such a heart warming story Annie. I feel your Dad was released from a blurred and scary world - and literally saw the light.

It's so interesting how your work needs to be inspired by heartfelt thoughts - that's what makes it more than a 'picture'.

BTW I was on our local BBC radio yesterday chatting about blogging... I made reference to how much I've enjoyed sharing printmaking/illustrating chat with you across the pond.

All the best
Celia

Celia, thank you for saying that, about my dad being "released from a blurred and scary world." It suddenly dawns on me that the first thing he saw with his new glasses and his new clarity was war! I had never thought of that.

Thanks too for talking about our virtual relationship on the BBC. xo

So lovely, Annie, to hear more backstory about your dad. Seeing his handwriting, reconfigured, was unaccountably moving to me. Perhaps it relates to the scrap of lined paper I have stowed away in some box that sports a paragraph, handwritten by my dad (who also had a pretty tough start in life), expounding briefly on the "beauty is in the eye of the beholder" aphorism. In any case, though I didn't know your dad, I am certain he would be wildly proud of you — and so touched to be revivified through your work.

We must be heading down similar paths. I was doing research and copied down a phrase from Elbert Hubbard that seemed poignant to me:

"Nothing is of any value excepting that which you create for yourself, and no joy is joy save as it is the joy of self expression."

There is something incredibly moving about handwriting, especially when we share so little of it these days. It dawned on me how little we hear the phrase "Oh, I recognized your handwriting" these days. My 16-year-old niece and I are still exchanging hand-written letters and I cherish every one of them.

I'm glad you have your father's handwriting to hold.

Hi Annie, thank you for sharing such a sweet story about your father and including him in your most recent print. I understand the need for an emotional thread to connect you to your work, and yes, family is a powerfully strong thread. i look forward to seeing more. Also, I have a recipe my grandmother put on paper for me and though she's been gone for 19 years, i look at that stained piece of paper and my heart sighs with memories of her.

What a great family story and memory for you.
I also enjoy letters that are hand written from family members but sadly only one is still writing the old fashioned way the others are computer written.A lost art today except for those who are like minded and enjoy the many aspects of line, form shape etc.

Yes your father's generation new poverty adversity and rose above it. Now where is that in people today.

Hi breadon. Not to get all political about this, but notice that my father was helped by both his own effort *and* by aid from the government in the form of the G.I. Bill. God works in mysterious ways.