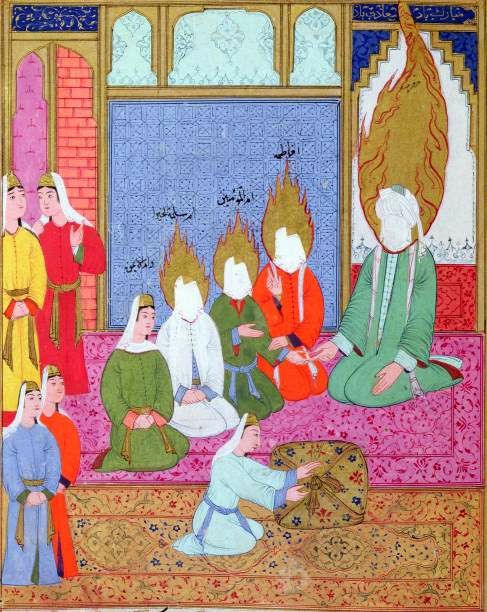 Here is the image of Muhammed I've decided to work from for my "A Real Fake" print. I found it on the internet using Google Image Search, and the text along with the image says this:


16th-century version of a 14th-century original painting showing Fatima (foreground), on her way to a Jewish wedding party, receiving a parcel of the green cloak brought by the Angel Gabriel from Paradise, in the presence of Mohammed (on the right), his young wife Aisha (next to him), and family members. Currently in the Chester Beatty Library, Dublin. 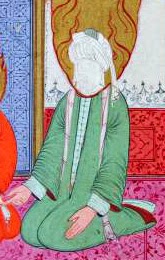 As I mentioned in the previous post, I don't want to invent my own image of Muhammed. I want to work from an Islamic historical image so that any objection to my portrait can't hinge on an argument that picturing Muhammed is prohibited by Islam. It is obviously not prohibited by Islam, since this image exists, was created in an Islamic culture, and has existed for 700 years.

Because of the touchiness of this project, I find myself more acutely aware than usual of both my motives and my decisions. Every decision I make feels like it has large consequences. My first decision is to crop in tightly on the figure of Muhammed, basically taking him out of context and out of the story of Fatima and her Jewish wedding party. For this print, I'm not interested in anything about Muhammed except his form, his image.

Email ThisBlogThis!Share to TwitterShare to FacebookShare to Pinterest
Labels: A Real Fake, Not A Cartoon