Relics Scroll 1: It Is What It Is 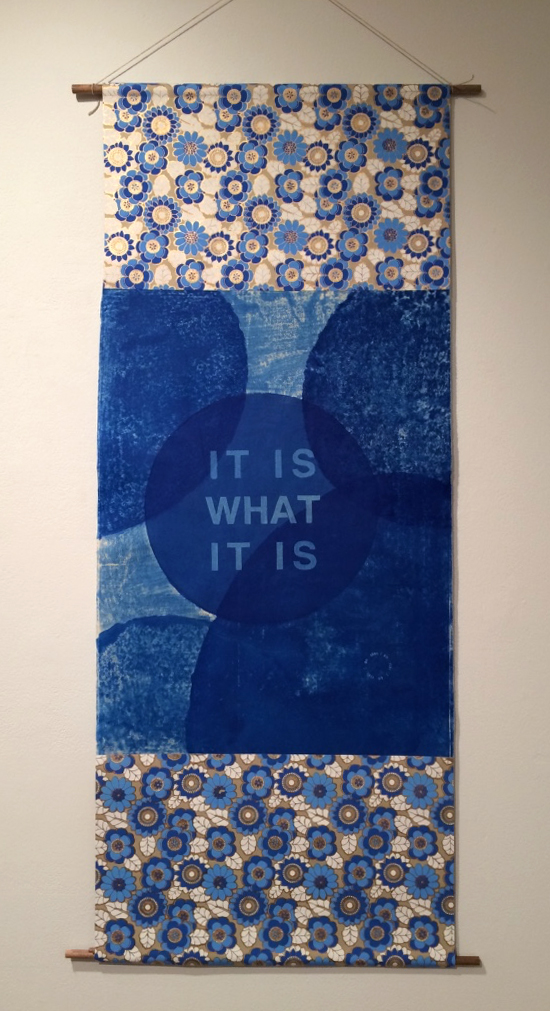 It is said that although America is still one of the most religious nations in the western world, we are on our way to becoming a much more secular society than we have ever been before. We like to think of ourselves as rational and free of superstition, but there are many vestiges of religion in our culture that seem to go unexamined. One of my favorite ways of excavating unexamined ideas and attachments is to look at colloquial language, especially platitudes and cliches. For my Relics exhibit, I made ten scrolls bearing American English platitudes that could be construed to have philosophical or spiritual meanings.

I started with "it is what it is." I'm sure that, like me, you hear (and/or use) this phrase several times a day. We toss it off to mean "whatever" -- things are as they are and we're not going to try to change them any further, but I think "it is what it is" is a deep insight. Accepting what is rather than fighting against reality can alleviate a lot of suffering.

On each of the scrolls I added smaller text from various spiritual traditions. On this one, below and to the right of the main text, you might be able to make out a small circle of white text. It says "I am that I am that I am that…" in a repeating circle. This text actually comes from two traditions. In the Old Testament of the Bible, Moses meets God as a burning bush and the voice of God says "I am that I am." There is also a Vedic (Hindu) Sanskrit mantra "Soham" which means "I am that." "I am that" is a way of identifying oneself with the universe or ultimate reality.

For the printmakers who want to know how I made the image, it's a woodblock monotype with paper prints. I made a background blue on an uncut block, then cut some circles out of paper which I inked, laid on the block, and printed with a baren. The darkest circle was made by inking the block and printing through a circular stencil. The large text is stenciled in white watercolor ink; small text is rubber stamped. 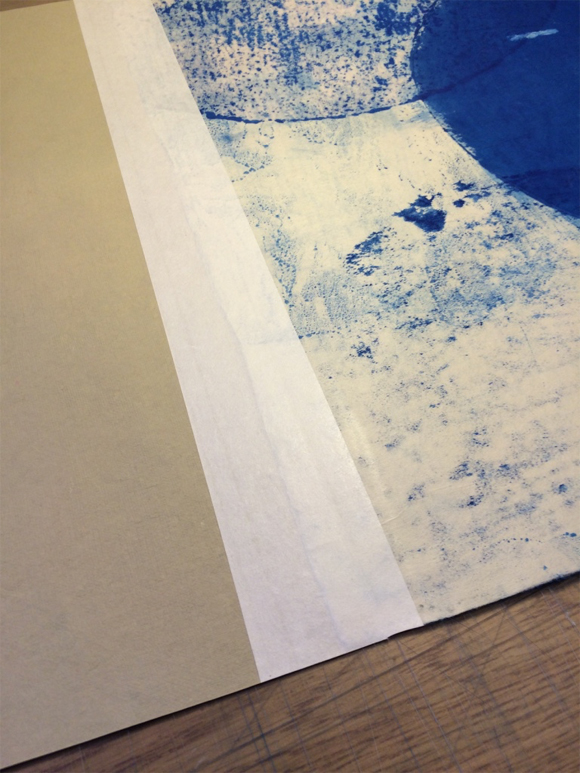 I mounted Japanese decorative paper (chiyogami) onto the print top and bottom by creating a paper tape with strips of mulberry paper and an adhesive called "Gudy 870" that I learned about from Karen Kunc when I took a workshop with her at Anderson Ranch.

Nine more scrolls to show you…
Posted by Annie B at 1:34 PM

In the blog you say: "We toss it off to mean "whatever" -- things are as they are and we're not going to try to change them any further, but I think "it is what it is" is a deep insight. Accepting what is rather than fighting against reality can alleviate a lot of suffering."

I struggle with the question of which of those directions is imperative at the moment the question is raised.

You mean, you struggle with when to let it go and say "it is what it is" vs. when to fight with things as they are and try to make them better? If that's what you mean, I can relate to that. And I don't know the answer. As I've aged I've become less inclined to exert my energy toward trying to change other people. Seems like an impossible task for the most part. And as I implied in the blog post, I've also gotten more inclined to avoid the suffering involved in banging my head against the brick wall of reality. Politics, racial injustice, war, the environment -- more often than not these things make me feel angry and helpless and paralyzed. So I look for ways I can effect change in my own little world and keep my own energy positive. I can speak to my neighbors, smile at strangers on the street, thank someone for thinking of me, call my widowed 90-year-old mother, call my congressman, drive a Prius, turn off a light, buy local food, and march for peace when there's a protest nearby. I feel like that's all the power I really have.

How about you? What were you thinking of?