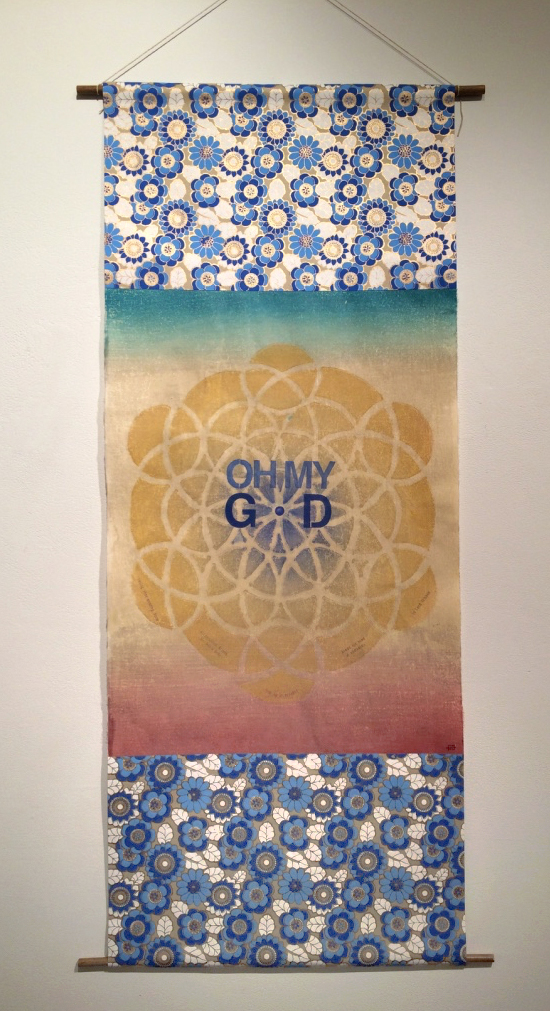 For my RELICS exhibit, I made ten scrolls bearing American English platitudes that could be construed to have philosophical or spiritual meanings. See all of the scroll posts here.
________________

Although OMG is a new-ish social media abbreviation for it, "oh my god" has been a much used exclamation ever since I was a child. I remember my mother frowning on it, like it was a kind of swear word. But it's interesting to think about when we say it. We say "oh my god" when we're surprised. We say it in the face of a stunningly gorgeous scene. We say it when something unthinkable happens. We sort of mean it when we say it. For the small text (not visible in this photo) I used a line from the Mahabharata, when Lord Krishna shows the warrior Arjuna his divine form, a form so awesome it can barely be withstood by a human being:


Seeing that amazing form, wonderstruck Arjuna, his whole body tingling in ecstasy, bowed his head in obeisance to Lord Krsna

The pattern on this print is called the Flower of Life mandala and it is said to represent creation in sacred geometry.

Tech notes: The background and top and bottom bokashi (gradations) are woodblock monoprints done on an uncarved block. The mandala of circles was printed on the same block through a hand cut stencil. Large text was stenciled, and the small text was rubber stamped.
Posted by Annie B at 2:57 PM