The End (Maybe) of Virtuoso Carving


Working from the photograph of Ty's fur I showed you in the last post, I used Photoshop to help me separate the image into six distinct colors, then transferred the separations onto six 12 x 9 inch blocks (30 x 23 cm). I started carving around September 1 and have been carving ever since, today being the 21st. I'm happy to say that I'm on the 6th block now. (The print is due October 15.)

In my own mind I call this very detailed, very tiny, very tight type of carving "virtuoso carving." I've worked like this quite a bit in my woodblock career — see my carving of page one of the Algonquin Bible, or the recent halftone Relics prints for example — and it's totally in keeping with the traditional Japanese method of woodblock printing (think ukiyo-e prints). It's also physically demanding and intense to carve this way. I've developed arthritis in my neck as I've aged and it's uncomfortable for me now to spend 100+ hours at my carving desk, even though I use an easel-like setup and a good chair. I never say never, because I know how I am, but this print may be my "virtuoso carving" swan song.

I made a mistake on block #5 and had to fix it. Obviously, a small slip of the knife on a print of swirly fur can often be ignored, but I slipped on an area where it really would have glared. Superglue to the rescue, as superglue doesn't soften with all the water needed in mokuhanga. 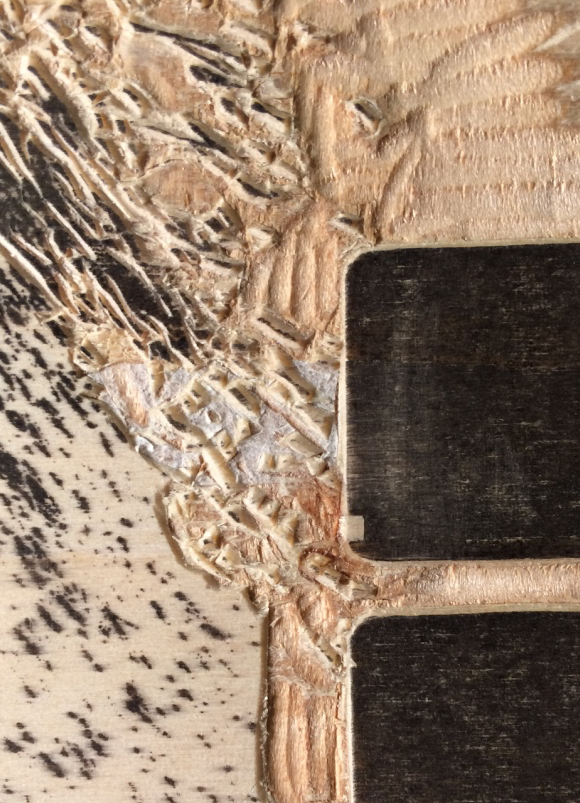 As tough as this carving job has been, I don't anticipate that the printing will be much easier. It will be an edition of 21 prints, per the portfolio specs. I have to pause before printing to get ready for Northampton's Printworks 2016! I'll tell you about that in the next post.
Posted by Annie B at 4:14 PM

This will be amazing!

Do you listen to music, talk radio or audio books while you work? If so, can you remember exactly what it was when you look at that part of the design?

After long periods of virtuoso carving, can you communicate or do you go dumb - I take hours to come out of the zone.

Quite some feat! But certainly a worthy subject. I look forward to the result.

Celia, yes, everything you said! I listen to music, podcasts, books while I work and sometimes it does seem to attach itself to the very portion I was carving while I listened. Or sometimes it works in reverse: I hear a song and it reminds me of a piece I was working on long ago. And I get entirely stupid after hours of carving: must take care before getting behind the wheel of my car!