The tarot is divided into two sections, the 22 cards of the Major Arcana (macrocosmic archetypal images) and the Minor Arcana (four “suits” that describe more everyday situations and energies). I asked my Rider Waite cards which of the four suits I should tackle first for my tarot deck and the cards told me “swords.” Rather than using the traditional suit names—swords, cups, wands and pentacles—I plan to use the four elements for my deck’s suit names. Swords are associated with the element Air, so I’ll be starting with 14 cards in the suit of Air. The Air cards represent the mind, including thoughts, beliefs, ideas, and communication. That seems like a fitting place to begin.

This will likely be the slowest suit to produce simply because I’m doing it first. Most of the design decisions for the entire deck will be made as I work on this suit.

Something that has bothered me about my Rider Waite deck is that there can be a lack of coherence as one goes through the suits. The Major Arcana tells a story as you go from one card to the next, and there’s no reason why the smaller suits couldn’t do that as well. So my first design decision is to make borderless cards with a background for each suit that travels lengthwise through all 14 cards to help unify them. I only know of one deck that does this— the Prisma Visions tarot. Pictured below is a woodblock print of a wind map that I’ll be using to pull together the Suit of Air. I’m planning to create all of the artwork for this deck by hand and then scan the pieces and assemble each card digitally for production purposes. 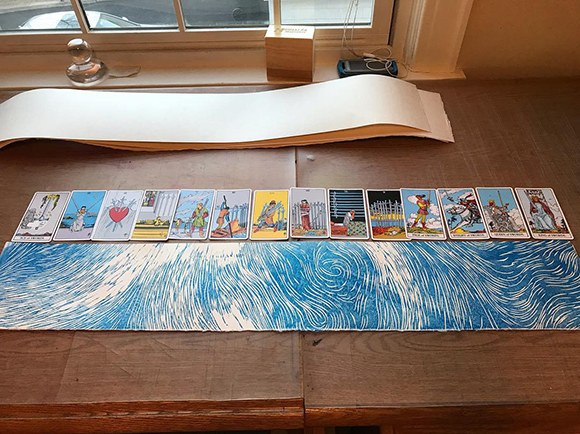