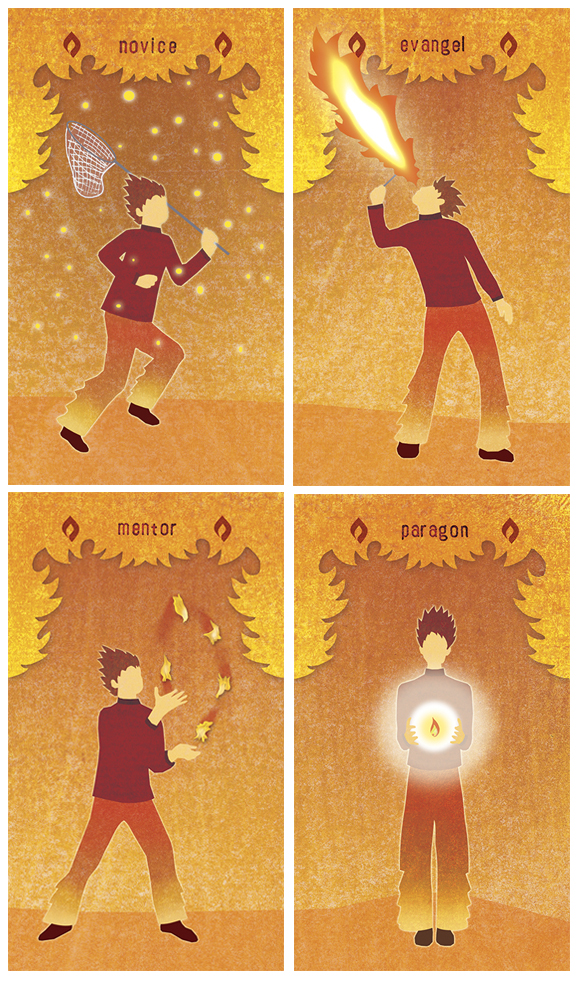 Novice of Fire
Playful, optimistic, and full of energy, the Novice of Fire is usually just starting out in a new pursuit. It is often the case that the Novice’s skill levels don’t match their energy levels, but they’re always happier to be in motion than not, so they’re not inclined to wait or plan once they’ve felt the impulse to act.

Evangel of Fire
The Evangel is energetic in every suit, but in the hyperactive suit of Fire, the Evangel is a double dose of energy. The Evangel of Fire is charged up. Confident, bold and charismatic, the Evangel thrives under pressure and is the life of every party. They think outside the box and can have unique and inspired ideas, but they don’t do very well in a situation that demands steadiness or a lot of routine.

Mentor of Fire
Fire is a difficult element to handle, but with the Mentor of Fire we begin to see the skill that comes with maturity. The Mentor is still extroverted and enjoys the spotlight, but there’s a radiance and vibrancy in their energy that they can now use to inspire others. They have become adept at creating communities of like-minded people who can bring about change in the world. The Mentor of Fire will defend themselves vigorously if attacked and can have anger issues.

Paragon of Fire
The Paragon of Fire has been tempered by the hot flames of their own energy, which at this stage emanates more as light than heat. Glowing with charisma and clear light, The Paragon is a natural born leader, a powerful visionary who is determined to leave a legacy. However, the Paragon can sometimes be aggressive or even ruthless in the pursuit of their goals.
Posted by Annie B at 11:58 AM

I can’t believe It’s been eight months since Ive commented on this fabulous series you’re doing. Nor can I imagine you forsaw the aptness of these cards to the present conflagrations when you were planning all these out! Thanks for these. After such unforseen darkness, and years of darkness all too seen, light the fire.