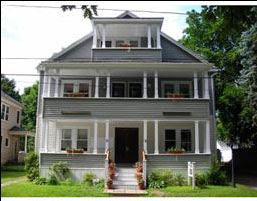 This is the front of the 100-year-old Victorian where we hope to move in next month. The deal on the condo in the old school fell apart, so we spent the past week looking for alternatives and we discovered this location. The house has been divided into 5 condominium units and we've put an offer on the third floor unit. It doesn't have a 400-square-foot studio space like the old school, but it has 7 rooms and nearly as much overall square footage as the house we just sold. It's a beautiful space in a great neighborhood, totally renovated, new heating, new appliances, new electrical system. I think we're going to love it.

So it's back to doing my moku hanga work in a bedroom. Lucky for me, moku hanga can easily be done in a bedroom!
Posted by Annie B at 1:11 PM 12 comments:

Email ThisBlogThis!Share to TwitterShare to FacebookShare to Pinterest
Labels: musings 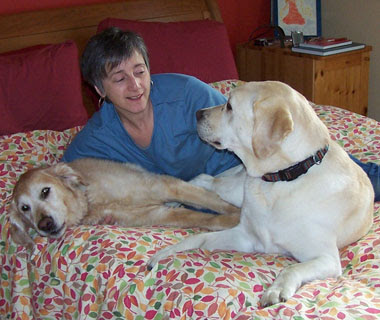 The house where Lynn and I and our dog Ty (yellow lab on the right) are staying belongs to Ty's girlfriend Ruby (golden retriever on the left). This morning, I got some much-needed therapy from these two goof-ball dogs. A subsequent long walk with the two of them lowered my blood pressure to almost normal.

Thank god for animal friends. People friends, too. We're feeling so much love and support.
Posted by Annie B at 10:03 AM 5 comments:

Email ThisBlogThis!Share to TwitterShare to FacebookShare to Pinterest
Labels: musings

On Thursday morning at 8:00 am a truck arrived at the house where I've lived for the past 11 years and my partner and I watched as all our worldly possessions were loaded aboard for an overnight stay. At 9:00 the following morning we would be closing on our new across-town condominium with studio and at noon the truck would arrive with our belongings. We cleaned the floors and surfaces, put out some flowers for the new owner, and shut the door on our beautiful house for the last time. We felt sad and nostalgic, but also felt good about the way we had left the property and excited about the new adventure ahead.

An hour later in our lawyer's office we were shocked to learn that there was a large amount of paperwork still outstanding on our purchase of the new condo. The seller's lawyer didn't know when the paperwork would be in hand, and our closing the following morning was not going to happen. The sellers were offering to allow us to move in anyway paying a rent of $50 a day. We were horrified. $50 a day was more than the mortgage on the house we had just sold. We spent a sleepless night going over our options again and again and finally decided not to move in under these circumstances. For now we're staying at the home of some friends, all our belongings are in storage, and we're just putting one foot in front of the other, making our way through this uncharted territory.

I've read about real estate deals that go sour and collapse at the last minute but I never imagined it would happen to me. At any rate, I asked the movers to put the box marked "hanga supplies" up at the front of the storage unit. At least I know exactly where they are. 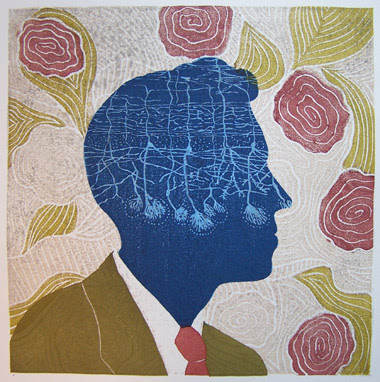 Because the wood I'm using is larger than the print area, I've been trying to utilize as much of it as I can. Here you can see that I carved two different sets of kento (registration marks) for two different areas of the print. This works well as long as you make sure to clean the pigment from the previously printed areas very thoroughly. 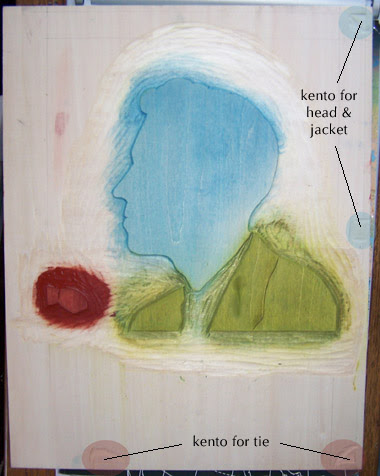 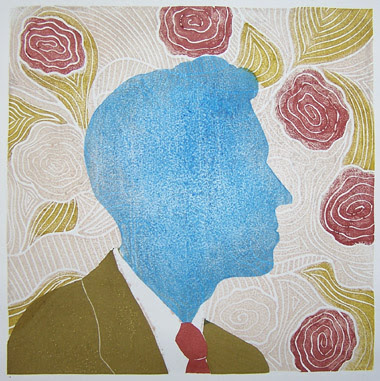 I really should go pack now. The truck is coming tomorrow morning!
Posted by Annie B at 9:26 AM 10 comments:

Email ThisBlogThis!Share to TwitterShare to FacebookShare to Pinterest
Labels: "All In Your Head", woodblock print 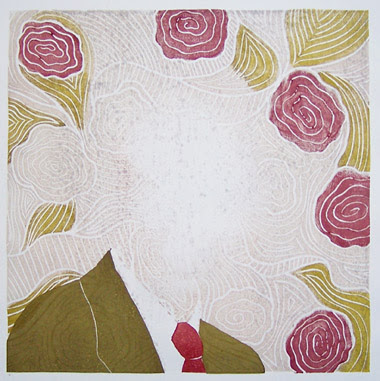 A quick print run this afternoon - I added a red tie. The color is a little bit wrong here. It was late when I took the photo and the flash went off. The photo in the previous post is more true to the real colors.

I think I'll finish this print tomorrow morning and then pack the rest of my studio for the big move across town.
Posted by Annie B at 8:42 PM 3 comments: 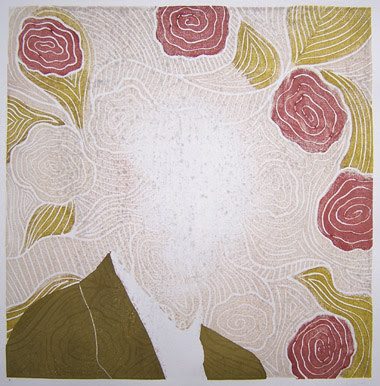 I managed another pass on the "Smell the Roses" print over the weekend. My house is full of boxes now, and I've started packing the studio. I'm keeping my hanga supplies out until the last possible moment, the last possible moment being 48 hours from now. Will I finish this print before I move?? I'm doubtful, but still holding out.
Posted by Annie B at 5:16 PM 2 comments:

Email ThisBlogThis!Share to TwitterShare to FacebookShare to Pinterest
Labels: "All In Your Head", woodblock, work in progress

Tonight was the artists' reception at the Works On Paper show at Northampton Center for the Arts. It was my first time being an artist at a reception and I wasn't sure how I'd like it, since I'm only sporadically sociable. Luckily, I was in a sociable mood tonight. Plus the fact, it's pretty easy to talk about something you're passionate about, so I had a wonderful time.

When I walked into the gallery, I was thrilled to discover that my Locusts In Babylon print had been awarded the second place prize! What a nice boost after a year spent collecting a half-inch pile of rejection letters from juried shows. Here are some pictures from the show. 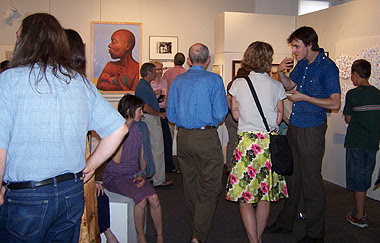 The reception was very well attended. 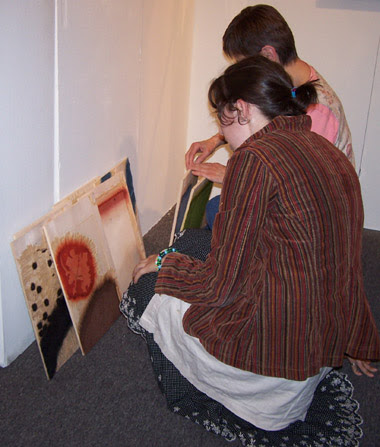 I brought the 8 blocks used in making the print, which was a great thing to do - a good ice breaker as well as helping people understand the process. Lots of people really spent some time with the blocks. 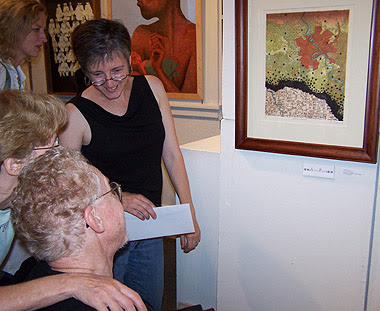 Here I am with my friends Deborah and Alan. I was deeply touched when Alan, who spends most of his time these days in a wheelchair, stood up to look more closely at the print. 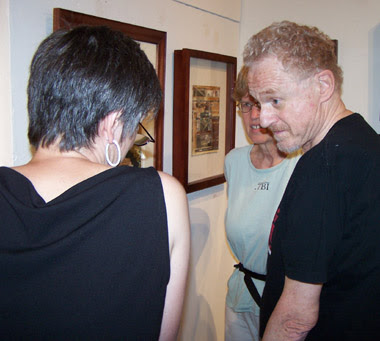 Thanks for the standing ovation, Alan! Next time I'll ask them to hang the work a bit lower.
Posted by Annie B at 9:57 PM 13 comments:

Email ThisBlogThis!Share to TwitterShare to FacebookShare to Pinterest
Labels: art show, locusts in babylon, northampton center for the arts

In the method of woodblock printing called "white line" printing, only one block is used rather than having a separate block for each color. Colors are carefully applied to the block one at a time and multiple impressions taken at each color stage. Blanche Lazzell is probably the most well-known of the white line printmakers.

For the "roses" in this print, I decided to try the white line method, since the block is already carved. First I painted some red oxide pigment mixed with a little paste onto the areas of the block that I want to print: 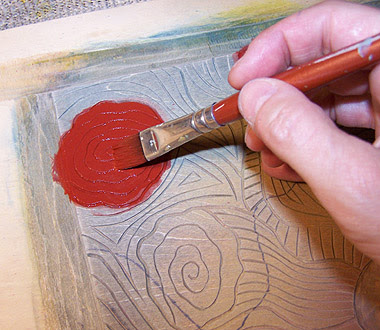 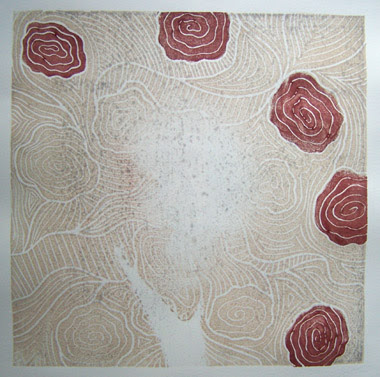 Then I repeated the same painting procedure using a green to create some "leaves": 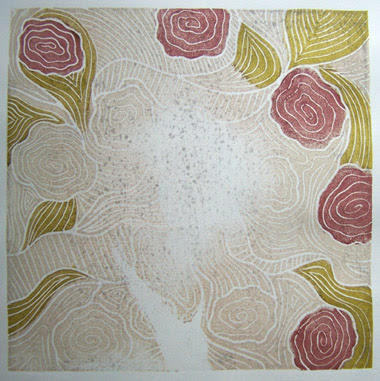 I hope to complete this print before I move on July 20, but I just got some illustration jobs that I also need to work on, so this print may move with me in an unfinished state. It's a good thing moku hanga is so portable!
Posted by Annie B at 1:28 PM 6 comments:

Email ThisBlogThis!Share to TwitterShare to FacebookShare to Pinterest
Labels: "All In Your Head", white-line woodcut, woodblock print, work in progress

Got up early this morning to work on my "Stop and Smell" print before it got too hot (current temperature is 92°F/33°C). I'm enjoying using the same blocks over and over again in different ways. Since every block prints differently, depending both on how it's carved as well as the properties of the particular piece of wood itself, I'm getting to really know each block well.

This is the energy/egg block printed as a background for one of the heads. I built the color up slowly, so this photo is the result of 3 passes. You can see that I left an area in the center, where the face will be, unprinted. I also used a stencil to block out an area at the bottom where I want a white collar to appear. 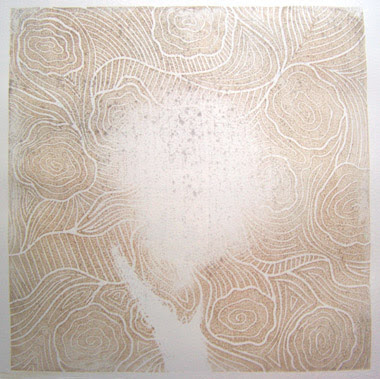 In a previous post I uploaded some photos of a family of washi papermakers in Shiroishi, near Sendai, Japan. Today I found a video on Youtube that shows Endo san making sheets of Shiroishi washi.

I was looking at the "energy pattern" block I carved previously for the egg prints and the swirls started to look like roses to me. 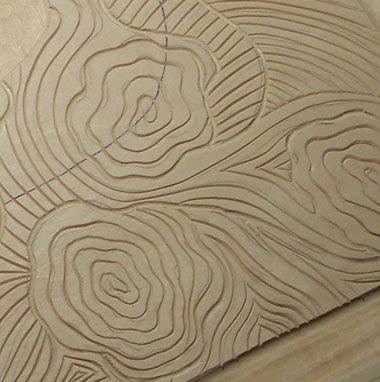 That made me think about the smell of roses, which led me to do some research into how exactly it is that we smell anything at all. I found a few drawings of olfactory neurons, so I carved a new block this weekend (between packing boxes for my impending move) for a print about smelling the roses. 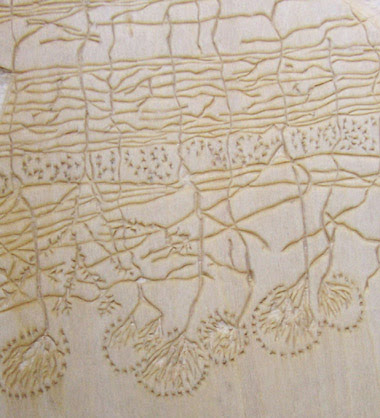 Email ThisBlogThis!Share to TwitterShare to FacebookShare to Pinterest
Labels: "All In Your Head", work in progress

Starting back at this point in the print progression: 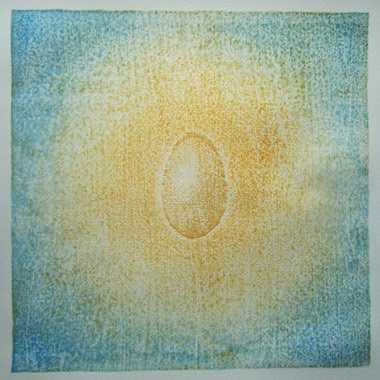 I went on to add the outlines of the heads, this time in a dark gray. I used stencils, which caused the ink to "squish" out along the stencil edges as you can see here: 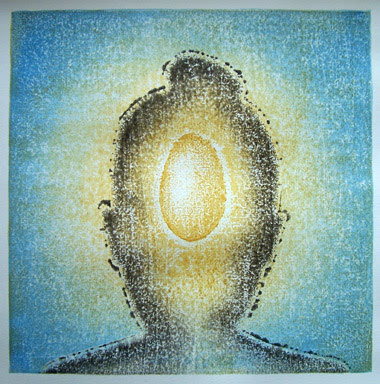 Then I added the energy swirl pattern on top for a different look: 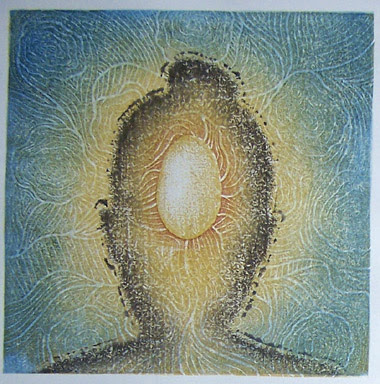 Here are all four of the variations: 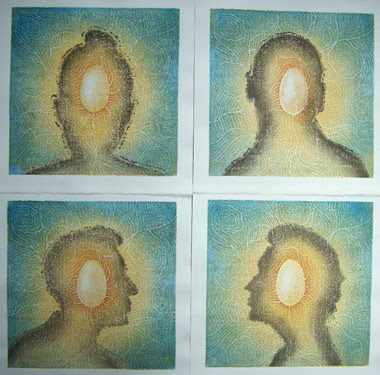 I don't like this version as well as I like the previous blue and yellow version, but I'm having fun experimenting no matter what the results.
Posted by Annie B at 2:45 PM 5 comments: