In Praise of Working Small 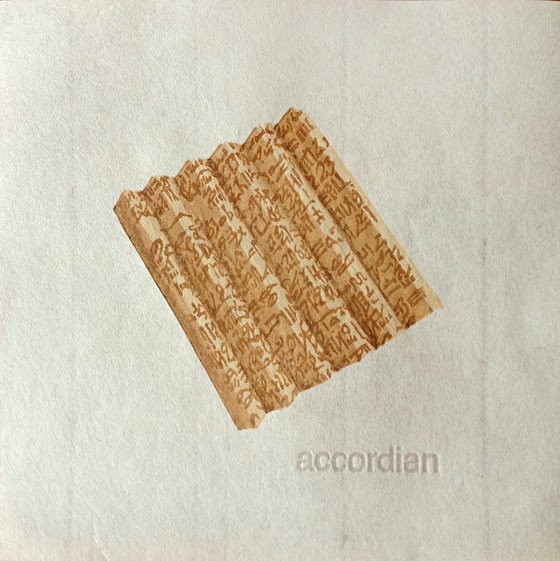 This print is small. The paper is 6 x 6 inches, the image area about 4 x 4. I haven't worked this small since... maybe since the very first print I made in 2005. Holy cow, everything is so easy at this size! Registration is a breeze, carving is fast, and printing can be done sitting instead of standing. (With big prints, I usually stand so I can leverage my meager weight over the baren more easily). You can also use thinner paper when working small, as it's easier to handle damp thin paper at small sizes. This kozo washi is from Hiromi Paper in California and they measure the thickness at 50 g/m. (For comparison, the thinnest paper I've used to date is Nishinouchi at 60 g/m.) I made this print in three days, not counting design time, and that kind of speed suits my recent mood very well. So there will be more little prints like this one.

I got going on this topic a couple of Sundays ago when I read an article in the NY Times that mentioned a number of code words that the NSA uses to identify various operations and information-gathering techniques. “Dishfire” was a codeword in the article that immediately captured my attention, a word just begging to be illustrated. So I did some internet sleuthing and discovered a treasure trove of over 100 NSA code words to work from. Initially I imagined doing a ‘One Hundred Views of the NSA’ kind of series, but I didn't feel like committing myself to that many prints, so I've decided to do 26 of them, one for each letter of the alphabet, and call it a ‘primer.’

A is for ‘accordian.’ I know that the musical instrument is spelled ‘accordion,’ not ‘accordian,’ but multiple lists I found spell the NSA code word with an ‘a.’ My references say that accordian is “a Type 1 Cryptographic algorithm used in a number of crypto products.” Whatever. I don't know what that means, really, and I don't care enough to go find out. But the word ‘crypto’ sent me hunting for hieroglyphics, which I copied, printed out on my laser printer, folded into an accordion, and photographed for reference.

I embossed the word rather than inking it. It's a secret, after all.

Climbing Back On the Horse 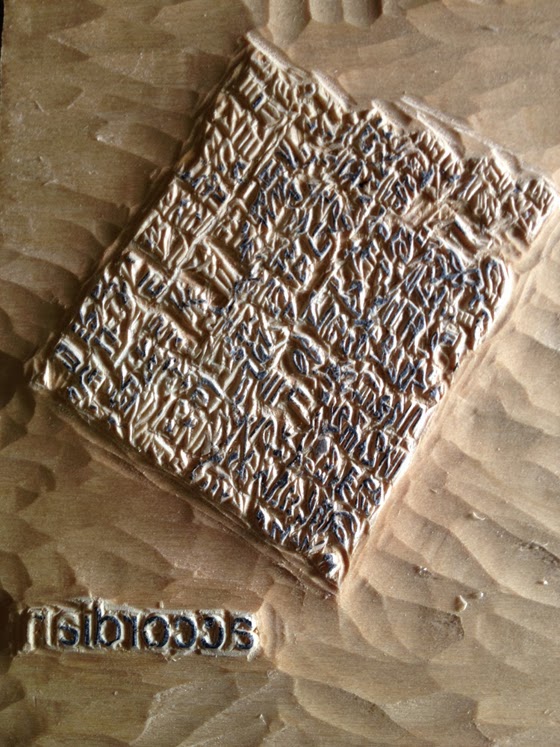 The life of a fine artist is weird. The only experience I have to compare it with is the life of a commercial illustrator, which was my life for 20+ years until I started with the woodblock prints. There's a lot of clarity in illustration. Someone contacts you with a proposal, you talk about the details, the price, the schedule and then you say yes or no. The typical turnaround time for the type of work I did was one to two weeks, which included sketches, edits to sketches, final rendering, and often edits to the final rendering. I usually had between five and eight jobs on my desk at any given time. Hard work, but the deadlines kept everything moving and prevented anything from becoming too precious. And for the most part I got paid pretty well.

But fine art is weird. The cycles are l-o-n-g. Crazy long. I've been spending an average of 18 months per print series. Since there are never clear deadlines, or for that matter clear parameters to the work (other than self-imposed), the only thing keeping me on track is my inner resolve to make the work and the dialog with the work itself. With no deadlines or external demands, there are dangers everywhere: the danger of losing interest, the danger of letting things get too precious, the struggles with inertia, the toggling between discouragement and delusions of grandeur. Then, in addition to making the work, there's a need to be persistent in keeping up with submissions to juried shows or applications for grants and residencies, and to devote continued attention to web sites and social media. And finally, there are the economics of the whole thing, which I'm discovering are absolutely absurd. The financial situation for artists in the U.S. is by and large abysmal. There have been a number of excellent articles about this recently, like here and here.

Two weeks ago I mounted a solo show at Historic Northampton. The opening was spectacular: well attended, exciting, a night full of great feedback, and a few sales. I couldn't have asked for a better experience. Yet still, I felt a kind of crash afterwards. Other artists tell me this is normal. It probably is -- I'm not yet an old hand at this. But compared to life as an illustrator, this strange cycle of being holed up in my studio for months at a time followed by big 'coming out' experiences at exhibitions followed by back to the studio for a bunch more months... it's just strange. When I decided to throw myself into the transition from illustration into fine art I really thought that my skills would be transferable. From a technical point of view, they are transferable. But the lifestyle is so different, the culture of the 'art world' so different... I had no idea.

So here I am, back in the studio after spending six solid weeks prepping for a four-week show, groping around for what to do next. Today I carved some hieroglyphics on a 4 by 6 inch block of shina plywood. I'm on the move again!
Posted by Annie B at 7:53 PM 4 comments:

The opening for my "Welcome to Nonotuck" show this past Friday at Historic Northampton Museum was great! Attendance was beyond expectations (Historic Northampton said it was the largest opening they've had so far) and many dear friends and family came to show their support. I was so pleased.

The show is up until December 6, 2013, so if you're in the area during the Thanksgiving holidays I hope you'll stop in to see it! Also see fellow woodblock artist William Evertson's review of the show on his blog.

Here are some photos:

This map of the home lots of the first settlers greets visitors at the door to the gallery.

A wall of prints about the Puritan settlers of Massachusetts.

I selected five native American artifacts from the museum's collection, stone tools that were found within the city limits, just to drive home the fact that these lands were inhabited for centuries before the Europeans arrived.

A few more Pilgrim prints on the back wall, plus the blocks that I used to create the print on the left, called "American Bible Story."

Another view of the blocks.

The opening was crowded all night. It was a little bit like hosting an open house at someone else's house. Very fun.

I was so happy that my sister could come. She brought my 87-year-old mom with her.

Up until now, my mother has considered the pinnacle of my career to be an illustration I did a number of years ago about 'staycations' that was published in Good Housekeeping, a magazine to which she subscribes. I think that this show might have become her new benchmark, though!

Thanks to everyone who came on opening night! And I hope you'll come and visit the museum this month if you couldn't make it on Friday.
Posted by Annie B at 4:56 PM 6 comments: