Neil Gaiman On How to Be an Artist

Neil Gaiman, author of the Sandman series of comics, offered this graduation address to the 2012 class of the University of the Arts in Philadelphia. It's full of great tips on living and working as an artist. My personal favorites: "Make good art" and "Pretend you're someone who can do it." Enjoy!
Posted by Annie B at 12:51 PM 3 comments:

Email ThisBlogThis!Share to TwitterShare to FacebookShare to Pinterest
Labels: artists

My woodblock print American Bible Story was juried in to "Shin Jidai: Contemporary Japanese Book and Paper Arts," an exhibition that opens this week at Minnesota Center for Book Arts. The show includes works from over 50 artists and highlights traditional Japanese arts such as moku hanga, origami, kiri-e (paper cutting), and more.

The exhibition kicks off with the Harukaze Festival of Japanese Book and Paper Arts, a day of demonstrations and activities on Saturday May 19 from 10:00-4:00.

My mother taught me that there are four things you shouldn't talk about: money, religion, sex and politics. I've hit all those taboos at one time or another, on this blog and in my work. Lately, since I started working on the Loaded series, the big topic has been money.

My proposal for the A.P.E. Gallery show that opened last week was to show my large prints and also to print some money the night of the reception. I decided that in addition to printing the money I also wanted to talk with people about how much was reasonable to charge for a 17-note packet of printed currency. I wrote up a list of all the money I had spent out of pocket ($678.23) and how many hours I had spent (98) to produce a total of 60 packets of money and asked for people's opinions.

Here are some sample responses.

On this blog, a commenter named Curt gave me a formula to use that even included the gallery's 25% take:


If you want to make an hourly rate R and assume you'll sell all of the bundles in a short amount of time, then the math is simple for determining the price P: costs = expenses, i.e.

I thought $20/hr was more than reasonable, but that would mean charging almost $60 per packet. My original thought had been that the packets should cost closer to $1 per note, more like $20 or $25 per packet, so this was disappointing.


My Facebook friends had varying opinions. Several said $60 to $100 was reasonable for art. Everyone agreed that it was practically impossible to determine how much a hypothetical buyer would be willing to pay.

Back on this blog, Tibi noted the educational value of revealing the artist's costs. I definitely had that as one of my goals. Diana suggested a sort of sliding scale. I liked that idea, so I decided to use that at the gallery on Friday night.

I set the money packet price at $35, giving myself about $9 per hour, but asked people to consider all the factors I had laid out, including the gallery take of 25%, if they purchased a packet of bills.

Here are some things people said at the gallery:

You could make more money babysitting.


It was an interesting night. I printed about 100 Jubilee notes and gave them away to people.

People really liked the concept of Jubilee and debt forgiveness. Most people saw the Jubilee note as something they could use to get out of debt. Nobody that I know of spoke of using the notes the other way around, to forgive people who owed them money.


Public printing is not quite as hard as public speaking, but close.

A couple of days ago, Dan Blask from the Massachusetts Cultural Council asked me to do a mini-interview for ArtSake, the MCC blog. We talked about art, money, art about money, and the Scale in Contemporary Printmaking show that opens tonight at A.P.E. Gallery in Northampton, MA.

If you're located in New England and looking for something to do this Friday night, I hope you'll come to Northampton MA for the opening reception of "Scale in Contemporary Printmaking" at A.P.E. Gallery, from 5:00 - 8:00 pm. The show features work by twenty artists from Zea Mays Printmaking and includes printed works such as books, sculpture, mural, video, installation, and more. My five large “Loaded” prints are included and on the night of the reception I'll be printing a currency of my own design.

As I print, I'll also be talking with gallery-goers about some of the issues involved in pricing art by using my currency as an example. As I noted in my last post, I spent a substantial amount of time and money to create this currency. I'd like to at least earn back my out-of-pocket expenses, but I'd also like these notes to be available to most people, so when I designed them I envisioned them being fairly cheap -- close to a dollar for a "dollar." That math doesn't work out in my favor, though, so I want to gather opinions and information from people at the reception and have a discussion about how much these items, and maybe art in general, is worth and how to value it. (Blog readers, I'll report back after I've gathered the input.)

Here's a photo of my portion of the show on the day it was installed: 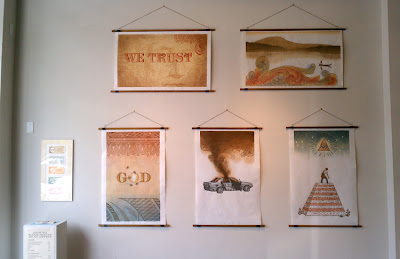 How to Make Money as an Artist 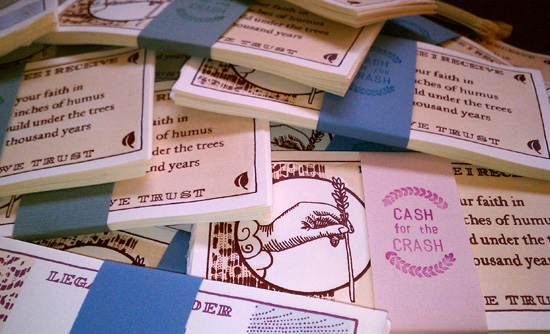 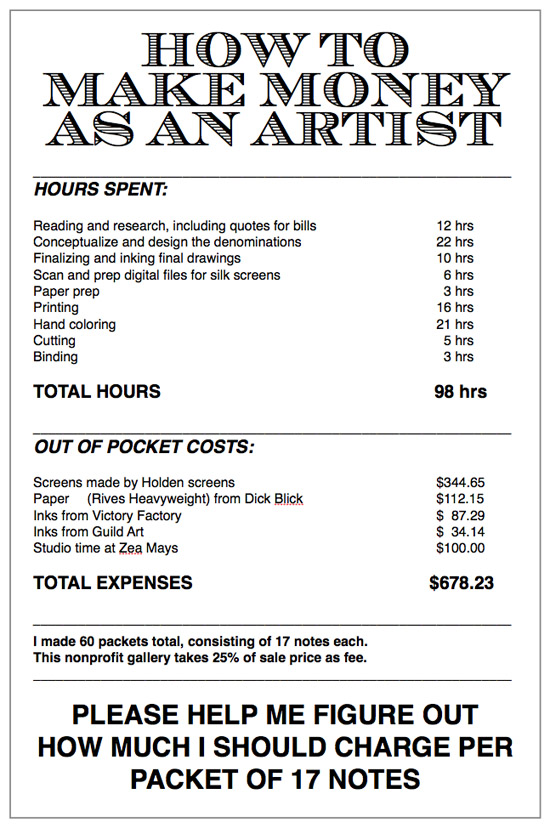 Got any ideas on this? I decided that each packet would have four of each denomination plus one "Jubilee" note for a total of 17 notes. It would also be possible to make packets of 13, with three of each denomination plus a "Jubilee." I like the number 17 better than the number 13, though. Plus, the packet is nice and hefty with 17, a little skimpy with 13. Genrosity seems more in keeping with my theme, so I decided to go with 17.
Posted by Annie B at 2:14 PM 11 comments:

Texture of Being: Relief Prints in Seattle 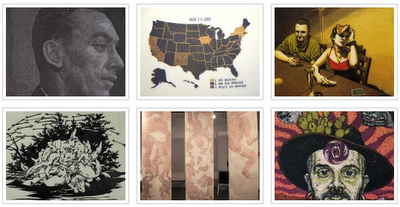 Some of my work can be seen starting this week in the upcoming show "Texture of Being" at Cullom Gallery in Seattle. Curated by Brian Lane of Print Zero Studios, the show opens Thursday May 3, 2012 with a reception, 6:00 - 9:00 p.m., and features work by 12 artists who work with relief printmaking (linocuts and woodcuts).

This Facebook page for the event has more information. Thanks, Brian, and congratulations on what looks to be a great show!
Posted by Annie B at 8:12 PM No comments: