Traditional tarot decks, like the playing cards to which they are related, have four court cards: Page, Knight, Queen and King. The court cards usually stand for people in readings, whether the person asking the question or people in the querent’s life. These court designations feel archaic and hierarchical to me, though, and the way they’re gendered leaves only one female, the Queen. I don’t want to follow suit (a little joke there) but what to do instead? I just purchased the small deck pictured below, called the Mesquite Tarot, that shows an alternate approach to the court cards. The Mesquite Tarot calls the court cards “character cards” and the designations they’ve chosen are Novice, Student, Knower, and Leader. Those don’t quite work for me (I especially don’t think that “student” captures the force and action of the knight card), but I like the idea of a progression, from less to more experience and accomplishment. 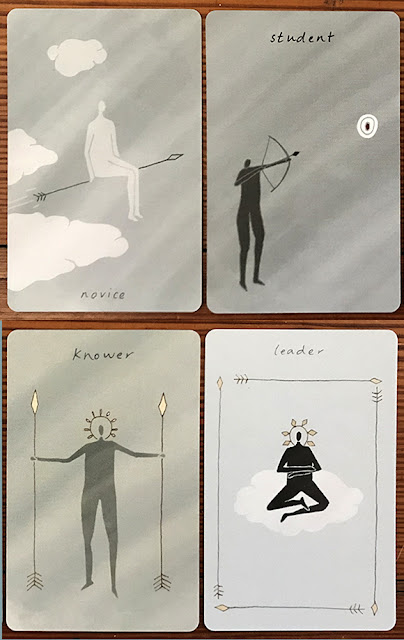 I’ve been working closely with a thesaurus and consulting with a friend who knows the cards quite well and he’s helped me get clear about what I’m looking for in naming these four characters. I want words that are evocative and poetic, that work with the traditional meanings of the cards, that hang together as four related words, that aren’t gendered, and that don’t carry a lot of baggage. Tall order, but we’re getting there.
Posted by Annie B at 6:17 PM No comments: