The portrait of John and Priscilla Alden that I'm currently working on came to me as I was reading Henry Wadsworth Longfellow's narrative poem The Courtship of Miles Standish (1858). Although it's likely that most of the events Longfellow described were products of his imagination, the poem was wildly popular in the 19th and early 20th centuries and it made the names of John Alden, Priscilla Mullins and Miles Standish household words across the U.S.

The poem presents the relationships between these three as a love triangle and ends with John and Priscilla's wedding, "simple and brief...as that of Ruth and of Boaz." Longfellow goes on to describe the two newlyweds as "fresh with the youth of the world, and recalling Rebecca and Isaac."

Reading these Biblical references, I began to think about the many Bible stories that have been or could be overlaid on the Puritans' story. John and Priscilla, the young lovers in a new land with their one million descendants, are like an American version of Adam and Eve. The Mayflower can be seen as a sort of Noah's Ark, bringing the seeds of an old culture to a new promised land. Like the Israelites, led from Egypt after being released from persecution there, the Puritan Separatists were relying on God to lead them to their own promised land.

Above is the section of carving I've been working on this week - the apple tree under which my American Adam and Eve will appear.
Posted by Annie B at 8:44 PM 3 comments:

I'll be teaching Japanese style woodblock (moku hanga) again this summer at Zea Mays Printmaking in Florence MA. This four-day workshop in July will cover all aspects of creating a multicolor print -- developing a design, color separation, transferring the design to blocks of wood, carving the blocks, preparing the paper, and learning various techniques to print the blocks. Zea Mays Printmaking is a large airy studio in an old factory building beside a river in picturesque western Massachusetts. See the Zea Mays web site for more information and to register.
Posted by Annie B at 8:29 PM 5 comments:

In traditional ukiyo-e printmaking, the design was always carved first as a keyblock, a very fine line drawing that was printed in black with colors added almost as one would color in a coloring book drawing. Here is a portion of a bijin (beautiful woman) print by Utamaro that shows the beautiful thin lines used in this keyblock technique: 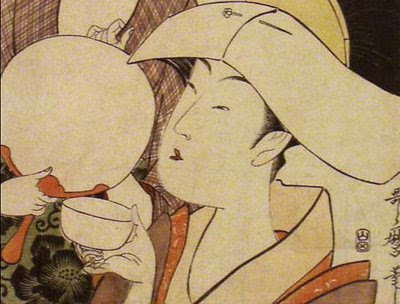 Prints can also be made without a keyblock. Here's a bijin print by Kiyoshi Saito that uses only areas of color with no linework to define the figure: 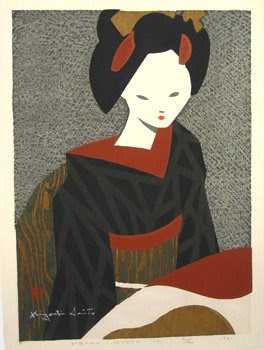 In the four years that I've been making woodblock prints I've rarely used a keyblock, but that's about to change. I've just started a new print, a portrait of John and Priscilla Alden that looks at ways that their story echoes several Bible stories in the American imagination. I want it to look a little bit like a Japanese ukiyo-e print and also a little like a 17th century wood engraving, so that calls for linework.

Here's a peek at a section of the keyblock I'm carving: 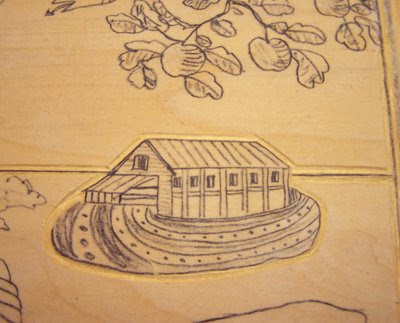 You can probably recognize the Bible story shown here.
Posted by Annie B at 8:18 PM 1 comment:

A short film about looking at art, about making the connection. From MOMA.
Posted by Annie B at 3:12 PM 1 comment:

Email ThisBlogThis!Share to TwitterShare to FacebookShare to Pinterest
Labels: art 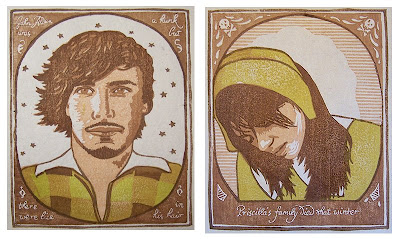 The 400-year time gap plus the paucity of information about these two individuals made depicting them as they might have actually looked practically impossible for me, so I decided to just let myself look at them from here -- from 21st century Northampton, Massachusetts, about 135 miles from where John and Priscilla found themselves in the spring of 1621.

For the portrait of 22-year-old John, I started with William Bradford's description of John as "a hopfull yong man, [who] was much desired." This plus a mention I found on the internet that John was tall made me postulate that he was a "hunk." I looked through dozens of fashion magazines and stock photos of handsome men trying to discern what male beauty looks like in 2009 -- bedroom eyes, metrosexual but still brawny, confident. I distilled features from a number of photographs to come up with a composite hunky anglo guy -- felt a little like a forensic artist (now there's a career idea!). Then I read that Alden did some hunting and trapping in Kennebec, Maine, and the idea of him wearing an LL Bean style hunting jacket got stuck in my mind. Knowing that Alden was not a Separatist himself makes it likely that he stayed in the new world hoping for financial gain, so I put the stars around his head. The stars reminded me of insects, and then I remembered reading that most of the people in that time period had lice and fleas, so the thought was completed. John Alden was a hunk but there were lice in his hair.

While constructing the portrait of 16-year-old Priscilla, I was again struck with how difficult the lives of women were in 17th century New England. Nearly 50% of the settlers in Plymouth died the first winter, and Priscilla was the only survivor of her family group. I chose to depict her in her private grief and again I applied 21st century notions of anglo female beauty to the picture -- she is thin, with delicate features and long lashes. I used "memento mori" imagery from colonial American sources to decorate the corners of the piece. I liked the cloud-like stripes behind her to compliment John's stars.

These are small prints. I may create printed "frames" for them eventually, and I expect there will be additional family portraits to come.
Posted by Annie B at 6:00 PM 15 comments:

Here are the results of yesterday's printing session.

After a long process of sketching various poses, I finally settled on depicting Priscilla as a tragic figure for this portrait. I can't seem to pull my thoughts away from the terrible difficulty of the lives of the women who first came to America. Priscilla was 16 years old in 1620, and her entire family died the first winter in Plymouth. She must have been overwhelmed with fear and grief.

John Alden, on the other had, has come to me as an all-American hunky northern woodsman. He did do some hunting, trapping and trading in Maine and no doubt would have purchased a plaid hunting jacket at LL Bean had it been available. There is a caveat to his attractiveness, though, which you can read in the text at the four corners:

Like most of the people of his time, John Alden would have had lice and fleas infesting his hair and clothing.

Two more colors to be added.
Posted by Annie B at 10:37 AM No comments: 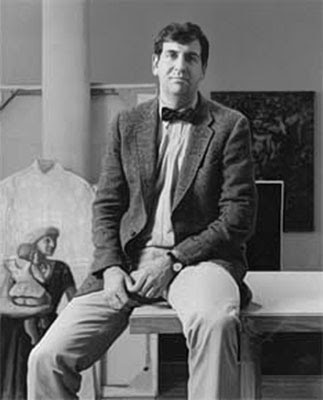 Check out this podcast interview with Seattle gallery owner and print dealer Sam Davidson on the new blog Working Proof.

Sam's love and respect for traditional printmaking is so clear and contagious. An excerpt:

"Prints are so incredible. Their legacy, their history, where they came from, so embedded in history, so associated with the printed word, letterpress, their connection to illustration and how they reflect so much the society they're a part of in a way that is so direct and so rich; the surfaces are so incredible, the range of mark making that is possible with the various techniques... Once you get involved you're a goner."

The Three-Minute Egg: That Kind of Focus (Chris Ofili)


Kathan Brown of Crown Point Press shares this video clip of Chris Ofili working in the CPP studio. The mental space he's apparently in is why I love making art so much.

"In the process of making art the mind wanders and gives way to instinct, which feeds off areas the intellect doesn’t. The process is one of distillation to the point where it’s just essence, just itself." Chris Ofili