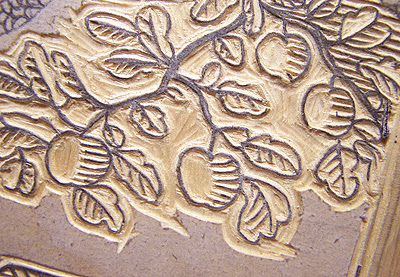 The portrait of John and Priscilla Alden that I'm currently working on came to me as I was reading Henry Wadsworth Longfellow's narrative poem The Courtship of Miles Standish (1858). Although it's likely that most of the events Longfellow described were products of his imagination, the poem was wildly popular in the 19th and early 20th centuries and it made the names of John Alden, Priscilla Mullins and Miles Standish household words across the U.S.

The poem presents the relationships between these three as a love triangle and ends with John and Priscilla's wedding, "simple and brief...as that of Ruth and of Boaz." Longfellow goes on to describe the two newlyweds as "fresh with the youth of the world, and recalling Rebecca and Isaac."

Reading these Biblical references, I began to think about the many Bible stories that have been or could be overlaid on the Puritans' story. John and Priscilla, the young lovers in a new land with their one million descendants, are like an American version of Adam and Eve. The Mayflower can be seen as a sort of Noah's Ark, bringing the seeds of an old culture to a new promised land. Like the Israelites, led from Egypt after being released from persecution there, the Puritan Separatists were relying on God to lead them to their own promised land.

Above is the section of carving I've been working on this week - the apple tree under which my American Adam and Eve will appear.
Posted by Annie B at 8:44 PM

I love seeing the cut surface of the block and look forward to seeing the print. You have such an organic and literary approach to your subject matter which I find interesting!

interesting to read and something to look forward to, Annie......your cutting is so good...

I really love this idea. And I enjoy seeing the way you cut your blocks. The way you're handling the apple tree had a touch of the old chapbook about it. Lovely!