We Are Pilgrims: the Book! 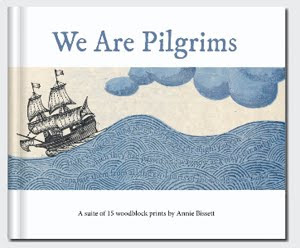 I'm happy to announce that my "Pilgrim series" of woodblock prints is now available in book form! Printed on thick paper with a slight gloss finish and available in either hard or soft cover, We Are Pilgrims showcases all 15 woodblock prints from the series, which was created between November 2008 and July 2010.

As followers of this blog know, these 15 prints examine the lives of the first wave of colonists in North America and their interactions with the native peoples who already occupied the land. The book is 72 pages and includes short prose-poem text that weaves through the images, describing the stories that inform each print.

Click here to go to Blurb.com to see an online preview of the first chapter of the book (there are 3 chapters in all).

I look forward to hearing your feedback!
Posted by Annie B at 1:58 PM 5 comments:

A week ago Lynn and I celebrated our 6th wedding anniversary and today I did this year's installment of the print series I call Sometimes I'm Married. As I've explained each year, I think of these prints as a gradual reduction series examining the state of my marriage. I plan to revisit this print every year around our wedding anniversary until all the states are one color.

Last Year's Map
This year I re-carved both blocks. One of the little Hawaiian islands had chipped off on the gold block, and the dark blue block had to be re-done to fill Maine back in. I had removed Maine prematurely in 2009 because the state legislature had approved a gay marriage bill which was scheduled to be enacted in August of that year. Unfortunately a group of citizens organized in opposition to the law, got a question on the November ballot, and the law was voted down. Bye bye Maine.

I also changed New Jersey from a maybe to a not. Last year there was some indication that same sex marriages from outside New Jersey might be recognized there, but at this point only "civil unions" are recognized. Since "civil union" is a made-up thing that means something different in each state, I ignore it. This map is about places where I'm married. Looks like I still need to carry my marriage license with me to most places when I travel.

I was pleased to have some company in my studio this morning while I printed. Artist and printmaker Will Tuthill came for a studio visit. We enjoyed meeting in person and talking shop. I especially liked talking about the process of developing an image. We found a lot in common about the ways we work. Thanks for coming, Will!
Posted by Annie B at 8:06 PM 3 comments:

Photos From the Loo Show

The opening of my show of woodblock prints at The Loo Gallery at Dreamaway Lodge was wonderful. Here are a few photos. 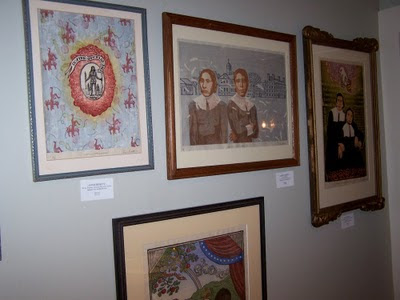 Click here to see even more photos on my Facebook page.
Posted by Annie B at 1:25 PM 7 comments:

Been a bit under the weather for the past 3 weeks, and still not quite right this morning, but life moves on anyhow and I needed to frame the Pilgrims for the Loo Gallery show that I told you about in the previous post. I personally like to look at prints without any glass, but since these prints will be in a bathroom and thus near water they need glass/plexi for sure.

The Dreamaway Lodge in Becket is full of funky and eclectic decor, including a lot of antiques and kitschy old art in kitschy old frames, so I decided to look for some kitschy old frames at local flea markets. Jackpot! I got almost all of the sizes I needed (I have an unfortunate habit of making prints in strange and varying sizes) for pretty darn cheap. No problem that many of them had no glass. I could get some plexi cut for me at Lowe's. (Yes I tried cutting plexi myself; no I was not successful and will not try it again.)

But I did have a couple of odd sizes missing, so with continuing on-the-cheap spirit I decided to try making an old-fashioned-looking frame from scratch.

Gotta love my own naiveness. It makes me do stuff I have no business doing. Like making frames even though I have no power tools. Now that I've tried this, I do NOT recommend actually doing it, but I will show you the torturous steps one by one.

Ideally one would use a router to either bevel the inside edge of a nice piece of moulding to hold glass plus mat plus backing, or even to make the whole frame out of a plain board, but I have no router. So instead I spent hours at a hardware store looking for two pieces of moulding that would overlap to make the right kind of lip for all the stuff I needed to put inside and still make a good-looking frame. The photo below shows the roughly 1/4" overlap that I achieved with the 2 pieces I chose.

I used wood glue plus a few well-placed brads to hold the two pieces together:

and let them dry:

Then came the ridiculous part. I used a miter box and hand saw to cut the 45° bevels. It was a disaster in measuring. I can't even describe the mathematical reason why, but there was no way to measure and cut to get the proper length inside the lip. I finally did a workaround that involved pieces of mat board cut to size with 45° bevels. I'm not even going to show you because it was such a cobbled-together solution, but here's the miter box:

I finally got four pieces cut, although inaccurately, so then I glued them together and used this clamping device to hold the frame while the glue dried:

There were some (pretty big) gaps I had to fill at two of the corners:

And then it was ready to paint:

Thank God paint is very forgiving. Once I scuff this thing up a little nobody will notice how badly crafted it is. I'm really glad this isn't for a museum :)
Posted by Annie B at 10:31 AM 13 comments: