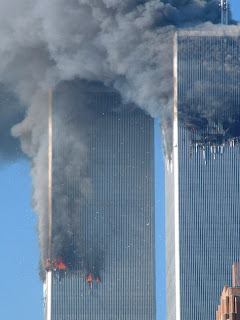 Partial transcript of comments from the
September 13, 2001 telecast of The 700 Club

JERRY FALWELL: And I agree totally with you that the Lord has protected us so wonderfully these 225 years. And since 1812, this is the first time that we've been attacked on our soil and by far the worst results. And I fear, as Donald Rumsfeld, the Secretary of Defense, said yesterday, that this is only the beginning. And with biological warfare available to these monsters -- the Husseins, the Bin Ladens, the Arafats -- what we saw on Tuesday, as terrible as it is, could be miniscule if, in fact -- if, in fact -- God continues to lift the curtain and allow the enemies of America to give us probably what we deserve.

PAT ROBERTSON: Jerry, that's my feeling. I think we've just seen the antechamber to terror. We haven't even begun to see what they can do to the major population.

JERRY FALWELL: The ACLU's got to take a lot of blame for this.

JERRY FALWELL: And, I know that I'll hear from them for this. But, throwing God out successfully with the help of the federal court system, throwing God out of the public square, out of the schools. The abortionists have got to bear some burden for this because God will not be mocked. And when we destroy 40 million little innocent babies, we make God mad. I really believe that the pagans, and the abortionists, and the feminists, and the gays and the lesbians who are actively trying to make that an alternative lifestyle, the ACLU, People For the American Way -- all of them who have tried to secularize America -- I point the finger in their face and say "you helped this happen."
______________________

It’s easy to say hey, these guys are extremists, they’re nuts, just ignore them. But both Jerry Falwell, who founded The Moral Majority in 1979, and Pat Robertson, who ran for the presidency in 1988, were extremely influential in late 20th century politics and, as it happens, I am a late 20th century lesbian. I remember Jerry Falwell as a loud and powerful anti-gay voice at a time when gay people were barely able to be public without getting fired or beaten up. The year I came out, 1977, Falwell declared war on LGBT people when he joined Anita Bryant’s anti-gay Save Our Children Campaign in Florida and he kept that war going right up until his death exactly 30 years later. Matt Foreman, executive director of the National Gay and Lesbian Task Force, said it well in an interview with CNN in 2007:


Unfortunately, we will always remember him as a founder and leader of America’s anti-gay industry, someone who exacerbated the nation’s appalling response to the onslaught of the AIDS epidemic, someone who demonized and vilified us for political gain and someone who used religion to divide rather than unite our nation.

On a positive note, I guess I can credit Falwell for politicizing people like me who never cared much about politics until we were under political attack.

Last month I was cleaning out some files and I came across a printout of an email that I sent to Falwell on September 15, 2001, after I heard the 9/11 remarks quoted above. I had forgotten about it, but the memories came back to me as I read it. When I heard Falwell’s remarks on September 14, the day after he made them, I was furious. For over two decades this man had been blaming gay people for anything and everything wrong with America. It was a last straw for me. There I was, reeling in the aftermath of the terrorist attack just like every other American, and this man with a microphone blames it on me? All my history with him and his ilk came crashing down on me in that moment. I was livid. There was no way that I was going to let him strip me of my citizenship, turn me into an ‘other,’ take away my feeling of solidarity with my country or my world. All these memories flooded me when I found this 12-year-old email, and in a fit of resolve I decided to reproduce it as a woodcut.

It sounds kind of corny to me now, but I remember that it felt fabulous to write it. I was ‘born again’ in high school, so I have no fear about speaking for God right back at someone who thinks that they know God’s mind. I’m very clear that I have just as much authority to speak for God as Jerry Falwell ever had. I doubt that Falwell actually read my email, but I thoroughly enjoyed the quixotic task of carving these words into a piece of wood and printing them with sumi ink.

Unintentionally, and unfortunately, I write this post two days after the bombing at the Boston Marathon. What I wrote in 2001 is still true for me: “God loves every wild and incomprehensible and tender and vulnerable and beautiful and horrible bit of this world.” How do I know this?  I know this because that’s what I love, and God and I are the same.
Posted by Annie B at 3:25 PM 4 comments:

Email ThisBlogThis!Share to TwitterShare to FacebookShare to Pinterest
Labels: God Is Our Witness, LGBTQ, religion, terrorism 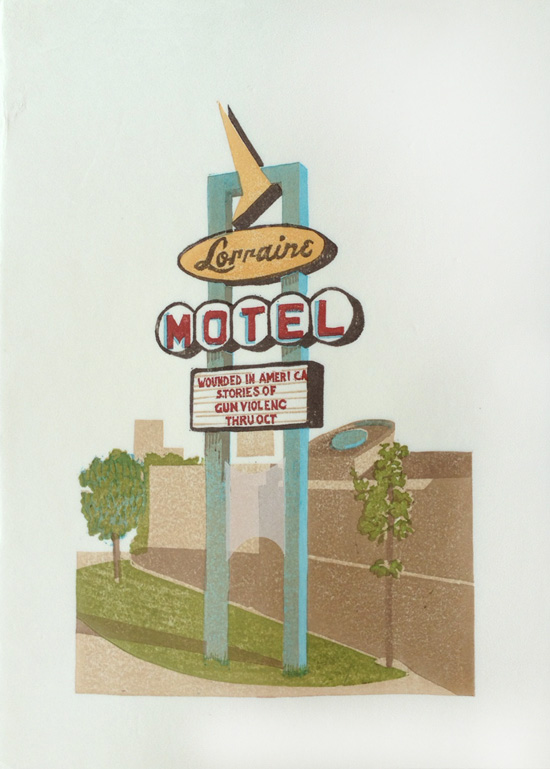 Forty five years ago today, Martin Luther King was shot and killed on a balcony at the Lorraine Hotel in Memphis, Tennessee, where he had come to show support for black sanitary public works employees who were on strike. The room where King was staying has been memorialized since 1968, and in the 1990s the Lorraine was converted into The National Civil Rights Museum. I've never been to the museum, but they seem to have permanent exhibits as well as rotating special exhibits. I worked from a photograph for this print and I left the “E” off the word “violence” just as it appears in the photograph. My impression is that the National Civil Rights Museum works on a pretty low budget and I like the way the absence of the letter shows that.

… if I were standing at the beginning of time, with the possibility of taking a kind of general and panoramic view of the whole of human history up to now, and the Almighty said to me, "Martin Luther King, which age would you like to live in?" ...Strangely enough, I would turn to the Almighty, and say, "If you allow me to live just a few years in the second half of the 20th century, I will be happy."

Like anybody, I would like to live a long life. Longevity has its place. But I'm not concerned about that now. I just want to do God's will. And He's allowed me to go up to the mountain. And I've looked over. And I've seen the Promised Land. I may not get there with you. But I want you to know tonight, that we, as a people, will get to the promised land!

And so I'm happy, tonight.
I'm not worried about anything.
I'm not fearing any man!
Mine eyes have seen the glory of the coming of the Lord!!

- Martin Luther King Jr., the night before he was killed at the Lorraine Hotel in Memphis.