The IFPDA Print Fair, which happens every November in NY City at the Park Avenue Armory, has become one of my favorite annual events. From Utamaro to Rembrandt to Chris Ofili, there are prints of all kinds on display from over 80 exhibitors. Lucky for me, Smith College Museum of Art sends a bus down every year so I don't even have to drive. The Armory Print Fair is a total printmakers' feast and could easily take up the entire day, but concurrently there's also the Editions/Artists' Books Fair at 548 W. 22nd St. in Chelsea. It's too much to see in one day, but I always try. Needless to say, I sleep on the bus ride home.

The Fair opens with a VIP preview on Wednesday, November 3rd from 6:30-9:00 and then continues through Sunday the 7th. I'll be there on Saturday and I hope I'll run into you! It's well worth the trip if you can make it. And I'll post some photos afterward.
Posted by Annie B at 1:35 PM No comments:

Wanted to let you know that you can visit the Cullom Gallery blog to see some more photos from the "We Are Pilgrims" opening and the demo the next day.

It was great to meet some new people as well as some folks I've known for several years but only online. I got to meet Viza Arlington, who has been making some great white line woodcuts, and Brian Lane, the Seattle half of the famous Print Zero duo.

Thanks for coming out, everyone! The show is up through November 27 if you're heading to Seattle for the Thanksgiving holiday.

Email ThisBlogThis!Share to TwitterShare to FacebookShare to Pinterest
Labels: "We Are Pilgrims", art show, woodblock

Lynn and I were very remiss in our picture-taking while we were in Seattle for the "We Are Pilgrims" opening, but gallery director Beth Cullom took a lot of pictures (and she has a really nice camera) so I'll let you know once she's posted hers. Meanwhile, here are a few teasers.

This was the first time I ever had my name up on the wall in vinyl. A nice Helvetica-like font.

Lynn & I arrived early on opening night and I naturally gravitated toward Beth's awesome collection of books about Japanese woodblock prints. I could definitely spend several days just sitting here geeking out on those books. (And that's Eva Pietzcker's work behind me on the stand.)

The work looked great, well lit and dressed in simple wood frames. By the end of the night there were quite a few red dots! 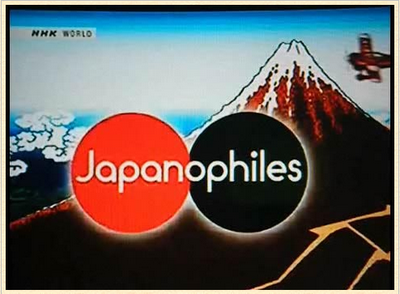 CLICK HERE TO WATCH THE VIDEO ABOUT DAVID BULL
I first encountered moku hanga in 2005 through a three-day workshop with New Hampshire printmaker Matt Brown, a workshop that was life-changing for me. However, I actually owe an even larger amount of my knowledge about moku hanga to a woodblock printmaker I've never met, Japan-based Canadian printmaker David Bull. NHK, Japan's public television network, has just produced a 30-minute segment about the life and work of this accomplished printmaker, so I thought I would take advantage of the occasion to write about David on my blog. David's 30-year love affair with this artistic medium has literally been the scaffolding upon which my own learning has taken place. 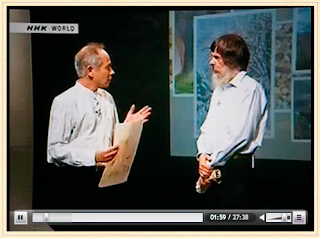 How is that possible? First of all, the computer makes it possible. In 1997, David launched the Baren Forum listserv and accompanying web site. The Forum began as a way for isolated woodblock artists and craftsmen around the world to compare notes, learn from each other, and talk shop. In the 13 years since it began, the site has become the go-to place on the internet for English-speaking Japanese woodblock artists, an absolute treasure-trove of information for anyone who is interested in exploring the medium outside of Japan. Although David handed over the reins of the Baren Forum site to a team of volunteer administrators several years ago, the site would not exist and would not be so comprehensive without his influence and expertise. I've learned 90% of what I know about woodblock printing through trial-and-error combined with strategic searching and question-asking on the Baren Forum web site. 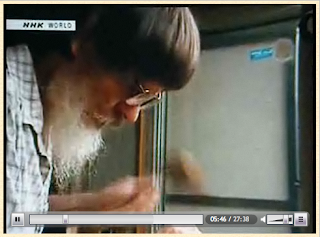 In addition to technology, the other ingredient that makes my relationship with this printmaker on the other side of the world possible is David's own infectious enthusiasm. Notice it when you watch the video above -- David Bull loves Japanese woodblock and he has a deep desire to preserve this ancient craft in the midst of a rapid decline in trained printers and carvers and the accompanying decline in suppliers of wood, washi and tools. I believe it's this enthusiasm that gives David the energy to reach out over and over again to other printmakers around the world to share what he knows. Whether by facilitating contact between western artists and Japanese suppliers via the Baren Mall, where one can buy supplies directly from Japan, or  producing an e-book called Your First Print, a "highly practical and focussed guidebook that will take you - step by step - completely through the process of creating your first print," David conducts all these activities on top of the hours and hours he spends producing his own superb and finely crafted work.

In many ways David is a bridge between this exquisite but declining Japanese art form and artists in the West who are deeply interested in learning it. Congratulations to David on this wonderful NHK portrait of his life and work. Perhaps one day we'll meet in person.
Posted by Annie B at 3:11 PM 2 comments: 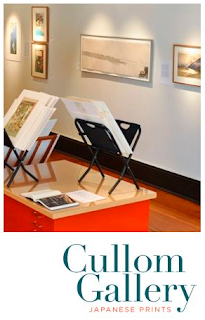 The Pilgrims have made a long journey westward, and I'll soon follow them! I hope that all of you blog readers in the Pacific Northwest will join me at Cullom Gallery in Seattle on Friday, October 15, 6-8 pm, for the party celebrating the opening of my We Are Pilgrims exhibit. I'll also be doing a printing demo and talking about the making of the Pilgrim prints on Saturday, October 16 starting at 1:00 pm. I'm really excited to be returning to the wonderful city of Seattle and I can't wait to see Cullom Gallery's new digs. Hope to see you there!
Posted by Annie B at 6:29 PM 10 comments:

Back in 2007 I made a print (Locusts In Babylon) about Iraq in which I alluded to the ancient Babylonian civilization that reigned in Mesopotamia 500 or so years before the birth of Christ. I used Cuneiform writing in the bottom portion of that print:

Today I found a web site that offers audio clips of scholars actually speaking some of the Babylonian and Assyrian texts from clay tablets that have survived over these many years. Babylonian and Assyrian belong to the Semitic family of languages, and are generally thought of as two dialects of a single language ('Akkadian') rather than as two separate languages. Check out some of the sound files here.

Language is an amazing thing. It carries so much of a culture and a people. Hearing an extinct language like this spoken aloud is like seeing light from a star that exploded a gajillion years ago. It's magical.

Speaking of extinct languages, I heard yesterday that linguist Jessie Little Doe Baird of Mashpee, MA, founder of the Wampanoag Language Reclamation Project, received a MacArthur Genius Grant to continue her work. Here is my previous post about Baird and her project and John Eliot's Bible.
Posted by Annie B at 1:42 PM 1 comment: