The raffle prints can all be seen at this link. Tickets cost $10 each or 3 for $25. You can buy as many tickets as you want, and can direct them all towards one print, or spread them out over several. Tickets can be purchased in person during studio hours or, if you're from out of town, by phone.

Email ThisBlogThis!Share to TwitterShare to FacebookShare to Pinterest
Labels: printmaking

I meant to invoke all the money that the United States has wasted on war for the past 10 years, but as I worked with the image I began to see other meanings as well -- the money we spend to maintain our petroleum culture, the collapse of the auto industry, the costs of both war and oil relative to our environment. Maybe there's more. I'm trying not to over-think this series, trying to follow my initial self-assignment of using a dollar bill as my starting point and allow images that appeal to me to be just that -- images that appeal to me. This one felt right.

On a technical note, and this is one of the big drawbacks of publicly blogging my process, many of my fellow printmakers commented on the beautiful wood grain that appeared in the smoke after four layers of brown. I hadn't expected that, but I liked it and I was upset and conflicted when it disappeared upon adding the carved dollar design. It was a really hard decision for me to go ahead with the carved design, but I felt that without it the piece didn't say what I wanted it to say. I wanted to talk about money, not wood grain and not woodblock printing. So the wood grain is gone. And if I hadn't blogged it, you would never have known it was there… At least now I know how to control -- and not control -- wood grain. Always learning.

The other thing I'm grappling with is that I started Loaded, this series about money, on July 7 and on September 17 Occupy Wall Street began. I like to tackle topics that are timely, but this is maybe a little too timely. I feel a lot of pressure now. Yet here I am.

Here's the series so far: 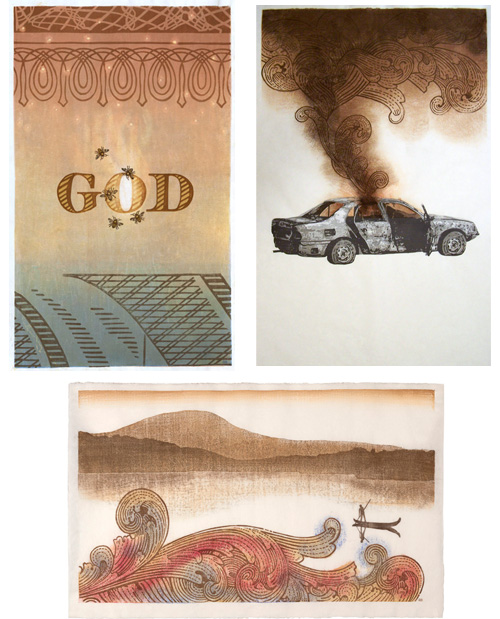 Last week I added four layers of brown to my "Smoke" print. One more layer to go and the print will be finished. I think.
Posted by Annie B at 6:19 PM 4 comments:

Two of my prints, Borders #1: U.S./Mexico (left) and Borders #2: Great Wall (right), have been accepted into a show at Worcester State University called The Global Perspective. I'm also happy to announce that Great Wall has received an Honorable Mention from the judges. The recently remodeled Worcester State Gallery features 2500 square feet of exhibit space and is building a reputation as a primary gallery for arts in central Massachusetts. I'll be attending the opening on Thursday, October 20, 2011 from 6:00 to 8:00 p.m. and I hope if you live in the area you'll join me!