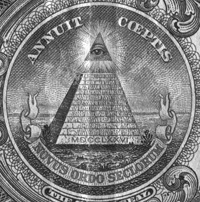 Here's some progress on my Pyramid print made over the Thanksgiving long weekend. There are 5 layers of color (the two areas of blue are slightly different and printed separately).

If you look at the original pyramid and eye motif on the dollar bill (left), you'll see that I've enlarged the amount of space between the bottom of the pyramid and the "eye of God" that hovers above it. You'll also see that I've given the God's eye some skin tone and iris color. There will be a small human figure standing in that enlarged space, on top of the unfinished pyramid. But first, I'll be working with the "sky" and the falling stars.
Posted by Annie B at 2:54 PM No comments:

Sometimes it's hard for me to loosen up my drawing hand, so I decided to force myself into looseness by using a power drill to draw on my wood block. Not sure how this will look once it's printed, but I'm hoping it will look like falling stars.
Posted by Annie B at 11:27 AM 9 comments:

Carving Can Be So Slow

Gradually making progress. Here's the pyramid sketched onto the board:

And here's a closeup of the carving in progress:

I always love going to New York during Print Week, and I was happy to make it again this year. Here is just a taste of what I saw yesterday on my whirlwind tour. Most of the photos I took were of woodblock work, but I also snapped a few shots of other work that I enjoyed. Hope you enjoy it too. 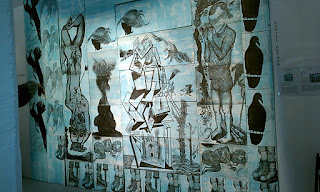 My first stop was the Editions and Artists' Book Fair in Chelsea. I neglected to take photos there, but you can see a slideshow in this online article from Art in America to get a flavor of the event. The one shot I did take was the one here, Daniel Heyman's large 65-part etching called When Photographers Are Blinded, Eagles' Wings Are Clipped. I also enjoyed the work at Anchor Graphics. Check out their website to see their impressive roster of artists.

My second stop was IPCNY for New Prints 2011/Autumn. Of all the shows I saw, this was my favorite. IPCNY exhibitions always run the full range, from hugely famous artists to emerging artists and covering pretty much all the techniques available to printmakers. Here are some of the works I saw, focusing on woodcuts.

I was also happy to see work by my cyber-friend Rick Finn on the wall at IPCNY. My photo was blurry, but you can see his winning "Buddha (mourning drape)" here.

I finished my day at the IFPDA Print Fair at the Armory. Here are a few photos, again focusing on woodblock prints. 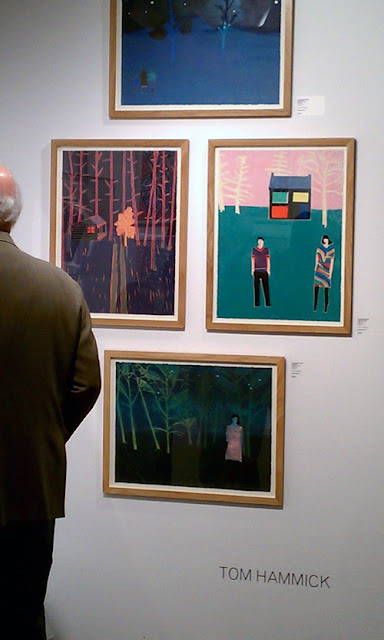 These reduction woodcuts by Tom Hammick were some of my favorites at the fair. They struck me as both light and brooding, both simple and complex. They made me linger even though my eyes were tired, or perhaps because my eyes were tired. 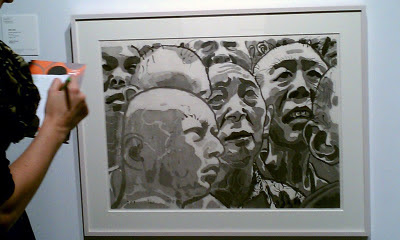 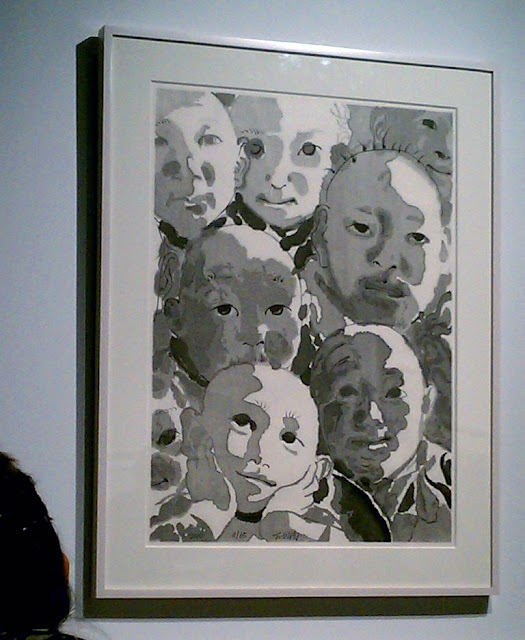 These woodblock prints by Fang Lijun were astounding. They looked so much like ink paintings. Very beautiful and haunting. 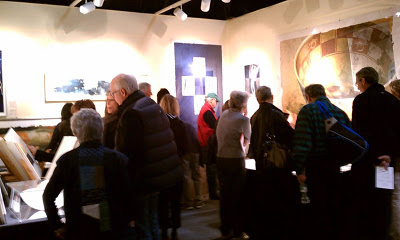 I've recently gotten acquainted with artist Sarah Brayer, who lives and works in Japan, and I looked for her work at the fair. I found it at the always-jam-packed Verne Gallery booth where I was unable to take any good photos, but check out Sarah's web site to see her latest handmade paper works, some of which contain luminous pigments.

The series about money that I'm currently working on, Loaded, is based on designs found on the back side of a U.S. one-dollar bill and I think it's safe to say that no examination of the symbols on the bill could ignore the Great Seal. Finalized in 1782, the Great Seal is basically the coat of arms of the United States and has appeared on coins, stamps, uniforms, passports and other government issued items. The "front" of the seal shows an eagle bearing a striped shield with the motto "e pluribus unum (out of many, one). The "back" of the seal, an image of an unfinished pyramid topped by "the Eye of Providence," is the image that I'll be working with for this next print.

On this pyramid side of the seal there appear two sets of Latin words. Above the Eye is written Annuit Cœptis, meaning "He approves (or has approved) [our] undertakings", and below the pyramid it says Novus Ordo Seclorum, which means "New Order of the Ages." The pyramid, which appears to be unfinished, has thirteen steps, representing the original thirteen states and the future growth of the country. The lowest level of the pyramid shows the year 1776 in Roman numerals. The Eye of Providence, like the pyramid, can be traced back to Egyptian mythology and the Eye of Horus, as well as Hindu and Buddhist iconography. In Christianity the Eye is usually surrounded by a triangle and is said to invoke the Trinity (Father, Son and Holy Spirit). The implication of the combined images is that Providence, or God, favors the establishment of the United States and will watch over its development.

One of the designers of the seal, Charles Thomson, said this about the pyramid.


The pyramid signifies Strength and Duration: the Eye over it and the Motto allude to the many signal interpositions of providence in favour of the American cause. The date underneath is that of the Declaration of Independence and the words under it signify the beginning of the New American Era, which commences from that date.

The Eye of Providence is a symbol that became associated with Freemasonry in the late 18th century, and conspiracy theorists make the claim that the Eye in the national seal indicates the influence of Freemasonry in the founding of the United States. I did a little research on the Freemasons and as far as I can see the worst fault of the Freemasons is that they don't allow women into the lodges. I'm not sure why conspiracy theorists would dwell on the pyramid and eye, but maybe I'm missing something. If anyone knows more, feel free to enlighten us in the comments section.

Meanwhile, I can think of plenty of other associations that the pyramid might have with our modern day economy, things like "pyramid schemes" for example...

I'm now in the carving stage, which will take a few days.
Posted by Annie B at 5:11 PM 3 comments: