I've split up this batch of prints to try two different directions. On 12 of the prints I added two more impressions. First I added yellow using the "egg energy" block, then I added a light gray overprint with the head blocks to define the people a little bit more. I think I'll stop here on this batch. Here are the four variations:

My print Locusts In Babylon will be exhibited in the Northampton Center for the Arts annual Works on Paper Show from Thursday July 5 through Tuesday July 31. The artists' reception will be Friday July 13 from 5 to 7 pm, so if you're in the area please stop by; I'd love to meet you! Gallery hours are Tuesday through Friday, 11:00 a.m. to 4:00 p.m.
Posted by Annie B at 10:58 AM 6 comments:

Still working slowly on this print. Today I carved "negative" blocks for the four heads (two shown above) and added a bit more blue to begin to define the four characters. I want the forms to seem to be emerging from the emanations of the egg, so I don't want them to be too defined.

This newest print is slow in developing. It's partly because of my impending move and the packing that we've started doing, but it's also because of the process itself. I'm not entirely sure where I'm going with this print. I know that I want to introduce the four "characters" I developed earlier, and I know that I want this print to develop out of the previous two egg prints.

The earlier two egg prints were created using only yellow oxide, black and burnt sienna. In this step I decided to introduce a new color, pthalo blue:

After the paper has taken a lot of moisture, or if I know I won't be printing for a few days, I often let the paper dry out and then re-wet it so it will be uniformly damp. This cuts down on registration problems a lot.
Posted by Annie B at 8:40 PM 2 comments:

My friends Jon and Jodie just returned from Morocco, where they stayed with their daughter who has been an exchange student there this year. They brought me back this photo because it reminded them of the print I made last year, "Everyone Everywhere Loves the Same Moon." Thanks, Jon & Jodie!

I'm doing a lot of the work on these egg prints with stencils so that I can use fewer blocks. Today I wanted to build up the yellow tones in the background, but I didn't want any additional pigment on the egg, so after inking the block I used an acetate mask to protect the already-printed egg area. Here's how it came out:

I'm working with about 20 sheets of paper on this print, so one impression was all I could complete today.
Posted by Annie B at 9:32 PM 2 comments:

After living with the last Egg print for a few days, I decided that I want more contrast in the print, so I went back and hit the gray again. Perhaps it's too dark now, but I think it will work better with the next print I'm planning.

Making a consistent edition with this method, which is basically a kind of monoprinting with wood, is challenging.

Today I started the next in the series. Both of these impressions were done with one block, first with the whole block and then with a stencil: 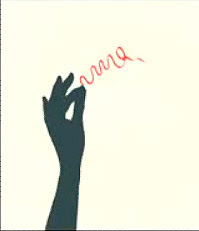 In the latest "Three Minute Egg" on the Crown Point Press Magical Secrets web site, Kathan Brown introduces us to the prints of Markus Raetz, and she frames the discussion of his work by talking about two types of artists, Searchers and Planners. Searchers are artists who work from experience. They love to explore materials and experiment to see what happens. Planners work from an idea, choosing materials and techniques in service of the concept.

I immediately identified myself as a Planner, and in the video Brown calls Raetz a Planner, too. She tells a story about the print shown above and points out that knowing the story -- that this print was created immediately after the September 11 attacks -- can enhance the artwork for a viewer. I often worry about that myself, as sometimes the idea I'm working from isn't obvious. But Raetz says something interesting. He says that he uses his subject matter only for himself, as a way for him to get into the work himself, and that it doesn't matter if the viewer knows the story or not. I think that may be true -- that just because I'm attached to my own idea doesn't mean that a viewer needs to be.

At any rate, I'm a planner who wants to become more of a Searcher. I always begin with a concept; I can't seem to help doing that. But if I hold too tightly to a plan, I find that the execution can become boring for me. Lately I'm working on keeping my plans loose and experimenting more as I go along, allowing the image to evolve even as I try to stay close to my original intention.

How do you work? Are you a Searcher or a Planner? Do Planners always envy Searchers and vice versa?
Posted by Annie B at 5:09 PM 5 comments: 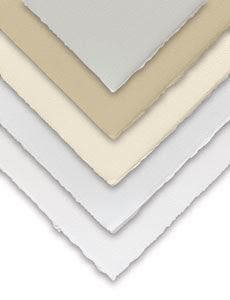 I've been using a fairly expensive Japanese paper called Echizen Kozo for the past year and a half or so. A lovely cream-colored paper made of mulberry and sized for moku hanga, Echizen Kozo costs just shy of $20 per 26" x 38" sheet -- not a paper you want to do a lot of experimenting with.

But I want to experiment. I want to feel free to mess up some prints in the quest for better ones. It's like the paralysis one can feel when approaching a beautiful hardbound sketchbook vs. the freedom of doodling on a spiralbound notepad. On the other hand, in the event that my experiment is successful I want it to be on good paper. That way I won't have to painstakingly recreate my results and possibly lose the energy of the original epiphany.

What to do? In my workshop with Matt Brown two years ago, he mentioned that he always uses Rives heavyweight paper and has been very happy with it. I used it a few times early on, but I received a lot of input from other printmakers that the Japanese paper is far superior, so I moved on. Last month, though, I bought a stack of Rives at Dick Blick for a mere $2.88 per sheet (26" x 40") and that's what I'm using on the egg prints (previous post). It's positively liberating as far as experimentation is concerned. Takes the ink real well, too, now that I know more about how to print. I'm not saying that I won't be using Japanese paper any more, but I sure like the cheaper Rives for playing around.
Posted by Annie B at 4:39 PM 9 comments:

Email ThisBlogThis!Share to TwitterShare to FacebookShare to Pinterest
Labels: process


progression n 1: a series with a definite pattern of advance

After not doing any woodblock work for nearly a month, I finally had a meltdown this past Thursday. I started raving about hating my illustration job, hating the fact that I spend all my creativity on projects that "end up on the bottom of the birdcage" (as a designer friend of mine likes to say), ranting about wanting to quit making images for other people so I can make my own images. My partner Lynn, bless her heart, suggested "why don't you take an afternoon off and do some printmaking?" She's very very smart.

So I had some fun this weekend with these two blocks:

(You can see my previous post about these blocks here.)

On Saturday I had about 6 hours set aside, so I prepared 15 sheets of paper (Rives Heavyweight) and did two simple impressions. I did a light whole-block print in yellow oxide and then added more yellow oxide with an egg-shaped stencil:

Added a little burnt siena to darken one edge of the egg:

And then some gray for texture:

I really liked it just like this, so I decided to call it a day and let the paper dry out. I wanted to see how much the colors would lighten once they dried and I also wanted to keep myself from marching forward when I might regret it later.

The next day (today) I still liked this print of the yellow egg just floating on the paper, so I pulled out 5 of them to keep and then re-wet the remaining 10 to keep experimenting with. Unfortunately, I got so involved in the process I forgot to take photos of each step, but this photo of the result incorporates 3 more impressions, another layer of gray, and then two impressions with the "Golden Egg" block:

Although I've been blogging my woodblock progressions for nearly two years, and I've loved the beauties as well as the trials of working with multiples, it has oddly enough never occurred to me before this weekend that I could stop in the middle of a print run and pull out a bunch to keep "as is" before going on to the next stage, to do a series that is a progression in itself. Moku hanga, with the gajillions of impressions required to make a print, is perfect for that approach.

I feel so much better now, having spent this weekend making some prints.
Posted by Annie B at 6:50 PM 11 comments: