This is a photo of the border design for the Mecca print, transferred onto a new block and ready to be carved. The text along the top and sides is a calligraphic rendering in Kufi script (like the Mohammed square already printed) of a set prayer or invocation that appears at the beginning of each chapter of the Qur'an. Spelled variously as Basmalah or Bismillah, it is translated as bi'sm Allah ar-rahman ar-rahim, “in the name of Allah, most gracious, most compassionate.” "Bismillah" is spoken as a gesture of respect and acknowledgement before undertaking a number of activities, including prayer, eating, and as a general expression of sincerity.

Here is a close-up of the script with carving under way. I've flopped the photo so that it reads correctly, although it's reversed on the block:

A Show In March - Repressed III

Two of my woodblock prints, Locusts In Babylon and Raping Darfur, will be on display in Richmond VA at the Repressed III show at Gallery 5, from March 7 - March 28. The show's closing reception on Friday March 28 coincides with the 2008 Southern Graphics Council Conference. I expect to be there, so if you're also in the area I hope you'll stop in and say hello at the reception! I'd love to meet any readers of this blog.
Posted by Annie B at 8:52 PM No comments:

I'm fighting with some sort of illness this weekend -- maybe bronchitis maybe a chest cold. I found that the only thing that made me forget my troubles was woodblock printing, so I went ahead and did a 7th impression on the Mecca print. 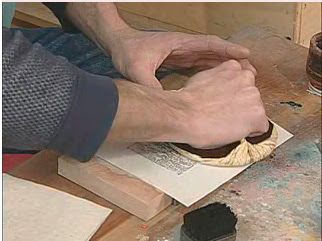 Matt was the teacher who introduced me to moku hanga in 2005. I got a lot of mileage out of that workshop!
Posted by Annie B at 4:42 PM 4 comments:

I've had a busy week, with a sick partner (flu) and a lot of illustration work to do, but I finished carving the third reduction on this Mecca block this afternoon. I'm hoping to print it this weekend.
Posted by Annie B at 5:24 PM 3 comments:

This photo is taken from an advertisement in the latest issue of Art On Paper. The ad is for a new release by Swoon at HuiPress, although there's nothing about the release on the HuiPress web site.

If you don't know Swoon, she's a young (26 31) street artist whose work has recently become sought after by galleries and museums, including the NY Museum of Modern Art. Swoon works on full-sized 4-foot by 8-foot sheets of plywood using exacto knives and/or a dremel tool. She prints by placing the board on the floor, rolling on some etching ink, placing paper on top, and printing with her feet. She makes multiple paper copies and then pastes them onto buildings.

What I love about this photo is the intimacy between the artist and the wood lino. I can't imagine how else you could carve a 4 x 8 sheet of plywood except by kneeling on top of it like this. (Note added 9/14/09: an anonymous commenter has pointed out that Swoon is carving lino in this photo, which I think is correct. She describes her woodcut process in this interview)

I also can't imagine how you could carve like this after the age of 40!
Posted by Annie B at 8:38 PM 7 comments:

Email ThisBlogThis!Share to TwitterShare to FacebookShare to Pinterest
Labels: other artists, woodblock

This reduction is going pretty quickly. I love how it looks like a little landscape up close.
Posted by Annie B at 9:15 PM No comments: 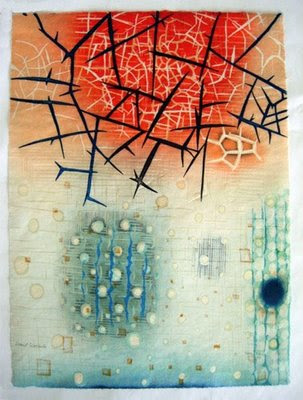 This weekend I ran across this article about artist Karen Kunc describing a workshop at University of Akron's printmaking school. Kunc's work, with its rich color and painterly edges, reminds me of moku hanga, but she works in the western style, rolling out inks onto the blocks and printing with a press.
Posted by Annie B at 7:03 AM 1 comment:

Email ThisBlogThis!Share to TwitterShare to FacebookShare to Pinterest
Labels: other artists

The Sujiud (Prostration): It is obligatory to go down to the floor and prostrate by pressing your bare forehead, and putting your palms, knees, and pads of the toes on the floor. Both feet are kept vertical with the heels up and the toepads down touching the floor.

You can't talk about Mecca without mentioning Muslim prayer, since all Muslims are called to pray 5 times a day facing in the direction of Mecca. Muslim prayer consists of a set of rituals of the body as well as verbal prayers. There are purifying washing rituals before prayer, and during the prayers there are postures of standing, kneeling and prostrations.

If you've never put your body into a prostrate position before, I'd recommend giving it a try. My own first experience with this posture was in hatha yoga class doing child's pose, which is also called submission pose.

I encountered the pose again when I began to meditate at a place where the tradition was to bow before the teacher's chair. There's something about placing one's forehead on the ground that makes it practically impossible to maintain feelings of pride, superiority, self-absorption, or immortality. No matter to what or to whom you're bowing, with your forehead to the ground you immediately feel human, fragile and mortal.

At any rate, I wanted to subtly reference the focus on Mecca for prayer as well as pilgrimage by darkening even more the bokashi around the Grand Mosque at the heart of the city. Next I'll begin carving the block again.
Posted by Annie B at 4:29 PM 1 comment:

In a recent comment, my friend Tom asked me a couple of pointed questions that helped me think more clearly about why I felt upset to discover that Mecca is closed to non-Muslims. The discovery shocked and upset me because it suddenly transformed me from a curious artist trying to explore and learn into a knowing trespasser, an interloper. It suddenly became clear that my print of Mecca could be construed as offensive or as a transgression. That wasn't my intention, but I now move ahead with the print knowing that I'm focusing my gaze on a place that I'm not supposed to see. That makes the print interesting in a way I didn't foresee.

A couple of days ago I added a bokashi (gradation) around the white spot that marks the Grand Mosque:

And then I carved the next state of the block. Each of these three "Birthplaces" prints will have a large square symbol at the top. For the Mecca print, I found a square calligraphic design made from Mohammed's name, called a Mohammed square. This calligraphy is in a script called Kufi. Kufi script has pronounced angularity and squareness and horizontal lines that are extended, so it is considerably wider than it is high. The script often is chosen for use on oblong surfaces. I'll be using more Kufi script later for the border. Here's the first impression with the third state of the block:

One thing I'm enjoying about working with the reduction method is that because I'm printing many times from the same piece of wood, the grain becomes fairly pronounced. Here's a closeup where you can see the grain beginning to stand out:

Rhythms of Modern Life: British Prints 1914-1939
On display through June 2008 at Boston Museum of Fine Arts.

Featuring approximately one hundred lithographs, etchings, woodcuts and color linocuts by fourteen artists, "Rhythms of Modern Life: British Prints 1914-1939" examines the impact of Futurism and Cubism on British Modernist printmaking from the beginning of World War I to the beginning of World War II. Represented artists include David Bomberg, Paul Nash, C.R.W. Nevinson, previously blogged Sybil Andrews, Claude Flight, Cyril Power, and Lill Tschudi. The show covers a turbulent time period when technology was transforming European life at a rapid rate that was both intoxicating and frightening, and both the enthusiasm and the dread that accompanied these changes can be seen in the prints. Most of the prints shown are polychrome linocuts and woodcuts.
Posted by Annie B at 5:52 PM 5 comments: