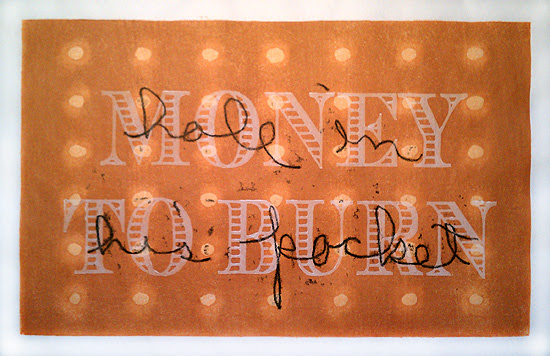 If you listen to how we speak, it's clear that money is hot stuff. This is the fourth print in a series that examines cliches we have about money that use the same metaphor for both wealth and poverty.
Posted by Annie B at 5:32 PM 2 comments:

I like Canada. And I like art, so I was prepared to like the Mass MoCA show, Oh, Canada when I went yesterday. And I did like the show, although I found it a bit disjointed. I guess disjointed is what happens when you mount a show that's supposed to exemplify the current state of a whole country's worth of art and artists. But the show is playful, funny, and ironic and with painting, sculpture, installation, performance, video and photography represented, there's something for everyone.

Of the 60+ artists represented, I had previously encountered only two. I knew the awesome work of Ruth Cuthand because someone wrote to me on my blog about her when I did a print about the role of small pox in the early settlement of North America. Cuthand has a series using beadwork to represent pathogens and four of these pieces were included in Oh, Canada. I also knew of Marcel Dzama as an illustrator, although I don't think he does much commercial work at this point. In the late 1990s I had heard about his use of root beer as a pigment, which is how his name became indelible in my mind. His piece in the Oh, Canada show is a video, which I didn't spend enough time with to speak intelligently about.

Anyhow, I'm an artist not a critic, so I'll just show you some photos of pieces that interested me. The show is definitely worth seeing


There's another similarly themed installation that celebrates young men in wild and natural settings upstairs. It's NSFW, so I won't post a picture, but you can catch a glimpse of it in this review of the show. (Lots more photos of the show on that page.) The review points out something that I noticed at the show, too, which is that there's little if any educational material presented, either about the individual artists or about contemporary art in Canada -- a missed opportunity by Mass MoCA.
Posted by Annie B at 4:08 PM No comments: 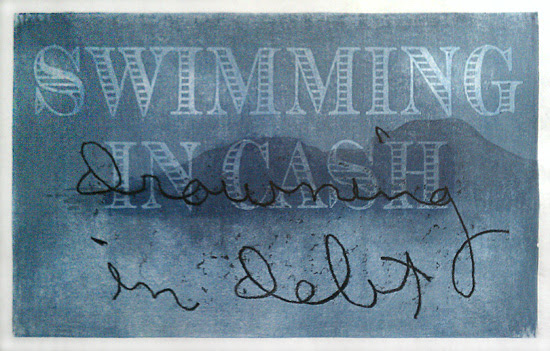 Rich or poor, we're all wet. This print is the third in a series that examines cliches we have about money that use the same metaphor for both wealth and poverty.

The print was made with two blocks of wood. I first used an uncarved block to lay down a couple of layers of blue, then I carved the mountain forms on another block and printed that in a blueish gray. I returned to the uncarved block and added the words "Swimming in cash" and printed that block on top of all of it with another blue-gray tone.
Posted by Annie B at 4:05 PM 2 comments: