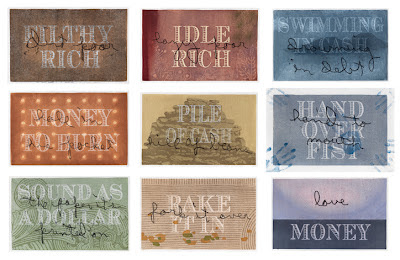 My latest artist task has been framing the nine Mixed Feelings prints for the Amherst Biennial, which begins next weekend. My work will be hanging at Hope and Feathers Gallery for the duration of the biennial:

Framing has never been my favorite part of being an artist, but I kind of enjoyed the task this past week. Maybe that's because I'm still in a transition place as far as knowing where I’m headed next in my work, so framing gave me a feeling of accomplishment even as I wait for the muse to point me in a new direction.

I finally heard the small still voice of the muse on Thursday telling me to purchase some small pieces of wood and a few sheets of new paper, so I ordered some 8" x 10" blocks of shina plywood and some Nishinouchi paper from McClain's. The supplies will be here on Friday, and by then I hope the muse will have filled me in on what we’ll be doing!
Posted by Annie B at 12:42 PM 2 comments:

I've been looking into what it would take to make a book from some of my woodblock prints, and today I came across this video which shows state-of-the-art bookmaking circa 1947. Amazing.
Posted by Annie B at 8:46 AM 1 comment:

Beth Cullom posted some nice photos she took at the LOADED show opening on Facebook that I’m re-posting here on the blog. It was a really fun weekend.

Beth and I thought a printing demonstration would be a good idea for one of the days I was at Cullom Gallery. I considered screen printing some Cash for the Crash as I had done in the spring at A.P.E. in Northampton, but the screens I made were too bulky to take across the country on an airplane. I decided to work up something that would be easy to print (one color) and easy to carry, and I remembered that when I was doing research for the Pyramid print I stumbled upon an article in Wired magazine about a formula that reportedly “caused” the 2007 crash. It was a mathematical formula developed by a man named David Li that supposedly quantifies risk and, since risk is something that investors love as long as it's manageable, Li’s formula was used with abandon on Wall Street.

Frankly, I barely understand the article or the formula, but you can check out the article here if you want to tackle it. I decided that the formula seemed to go well with the eye of the pyramid, and when Lynn walked into my studio as I was playing around with the image and said “that looks like a credit card” I knew that was what I should make.

I even had some paper for it. The first time I went to Japan, my 2003 trip to Tohoku, we visited a paper maker near Sendai, where I bought a package of 100 business-card-sized sheets of thick hand made washi. I thought I would make business cards for myself, but I never used it. So I decided to use this paper to make these credit cards. Magic Eye Credit Cards. I printed and gave these away on Saturday night at the gallery. 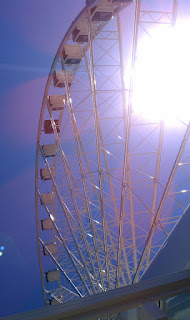 Lest you think that all this workaholic did in Seattle was work, here’s one more photo from my trip. Being a map person, I love being up above things a bit so I can get my bearings and see the big picture. When I saw this huge ferris wheel down on the waterfront I couldn't resist getting in line with all the tourists to get a look. I ended up having a car all to myself and I enjoyed the view of Puget Sound a whole lot.

Someday I want to go back to Seattle and have water adventures.
Posted by Annie B at 9:55 PM 3 comments:

I’ve just returned from Seattle where I went for the opening of my show, LOADED, at Cullom Gallery. It was a great four days, and I was thrilled to see so many virtual friends who I had never before met in person! Thank you all so much for coming. I had a wonderful experience both at the gallery and in the city of Seattle herself. Such a beautiful city. Here’s a short video that a gallery visitor took on Saturday night as I printed some “credit cards” that I gave to people in attendance.

Thanks, Seattle, and thanks Beth Cullom for such a nice visit. The show is up through October 27, so I hope you’ll stop by the gallery if you’re in Seattle. Hours are Wednesday through Saturday, 12:00 to 6:00 pm.
Posted by Annie B at 1:52 PM 3 comments:

Please join me this week in Seattle for my solo show, LOADED, at Cullom Gallery. I'll be at the gallery for the opening on Thursday, September 6, 2012, and again on Saturday the 8th for a demonstration and discussion. Here are the specifics:

Annie Bissett: LOADED
the magic, the promise, the curse and the language of money
September 6 - October 27, 2012

You can read the Cullom Gallery description of the show and the work here on the gallery newsletter.
Posted by Annie B at 8:25 AM 4 comments: