What Day Is It?

This period between Christmas and New Year always strikes me as a sort of time out of time -- a bit of travel, no real work to do, parties, time with family, seeing friends I haven't seen in a while. I can't keep track of what day of the week it is.

OK, it's Sunday. This afternoon I printed the text and waves layer on the "They Looked Behind" print. I had briefly considered doing the text on a separate block so it could be a different color, but I liked it all on one block so that the text looks like it's just part of the wave pattern when you look at it from a distance. One more layer to print.

On another note, I just got home from seeing the movie Milk. I loved it. Sean Penn did a great performance as a gay man. I forgot all about him being Sean Penn. I was in college in upstate NY when Milk was killed. I don't remember him so much, but I remember Anita Bryant very well. She got us gay people all fired up!
Posted by Annie B at 6:50 PM 4 comments:

I'm including William Bradford's words about the ocean in this print, so the next thing I did was carve the lettering. The type is based on The Fell Types, which take their name from John Fell, a Bishop of Oxford in the seventeenth-century who wanted to be a publisher. I like the crudeness of the lettering, as much of the printed matter from Colonial America was also crude.

Next I began to carve some waves. I'm using a technique that I read about in a moku hanga book, where one side of the relief area is cut at a very shallow angle to make a soft and irregular edge. I thought that this method would look better with the softer "round clouds" than a hard edge. Still quite a bit more carving to do before I print again.
Posted by Annie B at 7:12 PM 4 comments:

I love my local public library. I found a book there called A Dictionary of Colonial American Printers' Ornaments & Illustrations and I've been poring over it for days.

All of the ornaments and illustrations in the book are relief prints produced in the American colonies from 1639 through 1773. As I looked through the book I noticed what seems to be a convention in depicting clouds, especially clouds that reveal some sort of apparition or miraculous event. The clouds are kind of round and puffy.

I can't get that Bradford quote out of my mind:

This is the only description he gives of the voyage, but it's so evocative even in its brevity. These people had not a clue where they were going except for the few accounts they had heard or read, most of which were romanticized published jounals by various explorers who had been to the Americas. The passengers were crammed into a very small space, so small that some of them slept in a boat called a shallop that they were carrying with them for explorations once they reached the new world. The seas were rough and many of the passengers suffered from sea sickness. It's quite certain that it was a miserable journey for the Mayflower Puritans.

This print will incorporate the Bradford quote. I used a lot of rice paste for this first impression so that my brush strokes would show. 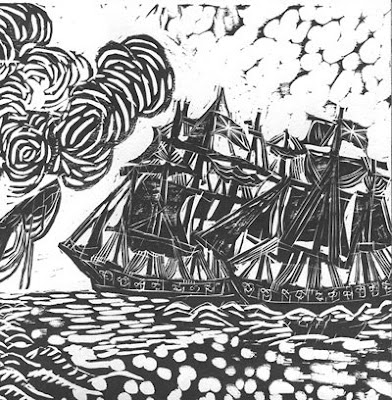 Naoko Matsubara
It's often said that everything has already been done, and maybe it's true. I found a book at my local library called Nantucket Woodcuts illustrated by previously blogged woodcut artist Naoko Matsubara. With text by Matsubara's mentor Fritz Eichenberg, this 1967 book outlines the history of Nantucket Island, located just a few miles off the coast of what was once the Plymouth Colony of Massachusetts. 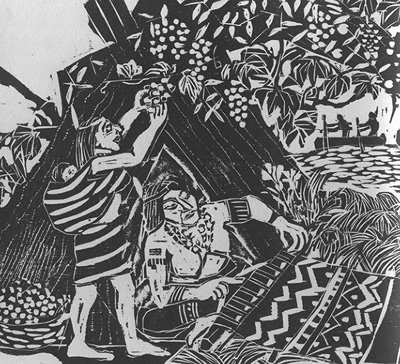 Looking at Matsubara's carvings, I can see that she referenced some of the old colonial woodcuts that I've been looking at too. The translation is distinctly Matsubara's, though, with her loose and expressive cutting.

Coming across this work makes me feel a bit daunted, but hopefully whatever prints I make about the Mayflower pilgrims will have my own peculiar twist on them just as Matsubara's prints have her mark on them.
Posted by Annie B at 1:27 PM 4 comments:

Email ThisBlogThis!Share to TwitterShare to FacebookShare to Pinterest
Labels: other artists, woodblock

With a Prosperous Wind 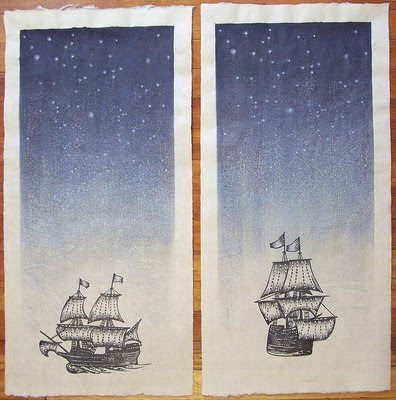 WITH A PROSPEROUS WIND (a & b)

I've been reading a book called Mayflower by Nathaniel Philbrick, a surprisingly riveting history of the 55 years between the arrival of the Puritans in Plymouth and the end of King Philip's War, the bloody war between the Indians and the colonists that was fought in New England from June 1675 to August 1676. Philbrick has followed primary texts in his account of the early years of Plymouth colony, including William Bradford's diary, published under the title Of Plymouth Plantation.

Bradford's diary says very little about the grueling 66-day voyage, but one thing he does say is that on September 6, 1620, the Mayflower set out from Plymouth England "with a prosperous wind." I thought that would be a fitting title for this first print. There were 102 passengers crammed onto what was probably a 113-foot boat, and the ship only averaged about 2 miles per hour on its 3,000-mile journey.

I can only imagine how terrifying that journey must have been. Bradford wrote,

But the Puritans believed that God's hand guided their every action. I wanted the print to be very vertical, both to make the boat appear small and to reflect this sense that the heavens were watching over them in their undertaking.
Posted by Annie B at 6:02 PM 9 comments:

After four impressions with an uncarved block I cut out some small circles and kept printing with washes of ultramarine blue. After every other impression I cut out the stars just a little wider to make them appear to glow.

After a few more ultramarine impressions I found that I wanted a deeper blue, so I added a layer of pthalo blue, which is a very intense pigment. I liked what happened, but afterward I decided that I'd rather not use modern pigments like pthalo blue. I'd rather stick to pigments that were available in the 17th and 18th centuries. So I added some red oxide and another layer of yellow oxide and more ultramarine blue. What you see in the photo above is a total of 12 impressions. I think one or two more impressions will get me where I want to go.
Posted by Annie B at 9:50 PM 10 comments:

Hey, how come you guys never told me about Nishinouchi paper?? It's great stuff. It has a translucency like parchment but plenty strong. A little hard to work with when it gets too wet, but I've been letting it dry between impressions and once it dries it's just the way it was before I printed on it. It has a lot of character, some long different-colored fibers that add charm, and these qualities plus the rich natural color make it a perfect paper for my 400-year-old topic.

As I've done a number of times in the past, I started this print with a piece of wood carved to the image size with a kento (registration marks). I took two impressions from this plain piece of wood, a pale blue and then a pale yellow. I treated both applications as a bokashi. It's hard to see in this photo because it's so light:

Then I cut out a proof of my Mayflower block so I could move it around on the print and see where I might want to put it. I think Lynita Shimizu first taught me that trick.

A piece of tracing paper placed on top allows me to then draw on top of the print and the cutout to experiment with ideas for the next step.
Posted by Annie B at 9:07 PM 6 comments:

Shaking Up the Process

When in doubt, do it again. I re-carved the Mayflower so that it faces left (west). It would have bothered me the other way, no matter how I rationalized it.

I also carved a view of the ship from straight ahead. (This is a first proof, and I see that some cleaning up is needed):

In the traditional Japanese method of printmaking that I use, a block is carved for each color. Lately I've been feeling frustrated by the fact that I'm carving very large, very labor-intensive blocks and then using them just once. This plus the amount of pre-planning involved often makes me feel that the process outlasts my internal creative current. By the time I finish a print, I've often mentally and emotionally moved on to another stream. What I want to do is to find a way to make prints that are still moku hanga but are more spontaneous to create.

My thought for this series is to carve up little blocks that I can use and combine in a number of ways to build larger prints. Neither of these Mayflower blocks has a kento and both are on small pieces of wood, just large enough to fit the images. The next step I'll be taking is to set up a large block with kento marks that will fit my paper (I'm testing a paper called Nishinouchi from McClain's). Then I'll just start printing a background for my Mayflowers to sail on using some of the techniques I've already experimented with -- stencils, printing with my hands, wiping -- and see what evolves. Sort of like moku hanga monoprinting, I suppose. We'll see what happens.
Posted by Annie B at 1:51 PM 4 comments: