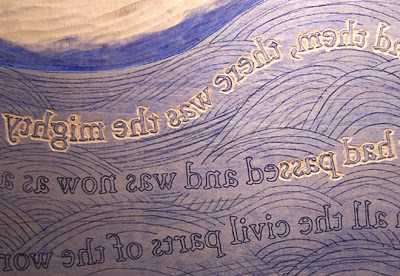 I'm including William Bradford's words about the ocean in this print, so the next thing I did was carve the lettering. The type is based on The Fell Types, which take their name from John Fell, a Bishop of Oxford in the seventeenth-century who wanted to be a publisher. I like the crudeness of the lettering, as much of the printed matter from Colonial America was also crude. 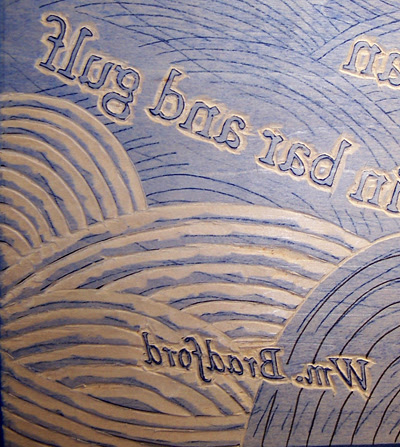 Next I began to carve some waves. I'm using a technique that I read about in a moku hanga book, where one side of the relief area is cut at a very shallow angle to make a soft and irregular edge. I thought that this method would look better with the softer "round clouds" than a hard edge. Still quite a bit more carving to do before I print again.
Posted by Annie B at 7:12 PM

This is going to look so great printed up! I'm rubbing my little chapped paws together in anticipation! Okay, maybe it's to stay warm but the sentiment is there! I love your hand carved type in the Fell Font! A few months ago I was lucky enough to go type shopping and figured out I have expensive taste. Sixteenth Century Roman (Duensing) and Mountain House Press Type (Dard Hunter) were two that I was looking for and they have this worn, crude, broken feel like your font. Come to find out they are also rare and expensive! I found a type vendor that wouldn't come off his set of XVI Roman for anything! That is when you resort to hand carving type I guess! Can't wait to see the next impression!

I'm rubbing my cold hands together in anticipation also! I am looking forward to your posts on this print just as much as your last one. I had an idea for a print and couldn't figure out how to do breath. You've helped me think differently with your wind and waves.

Ah, ito bokashi (I think that's what it's called, from Salter's book?) can't wait to see the print. I did a little of that once, inadvertantly and it looked OK. Been sanding edges to see what that looks like....YOur carved letters look awesome...

that looks very good....I´m amazed how good you are at cutting around these small letters...and the thing about the wawes is interesting and I´m loking forward to see how it will work.....