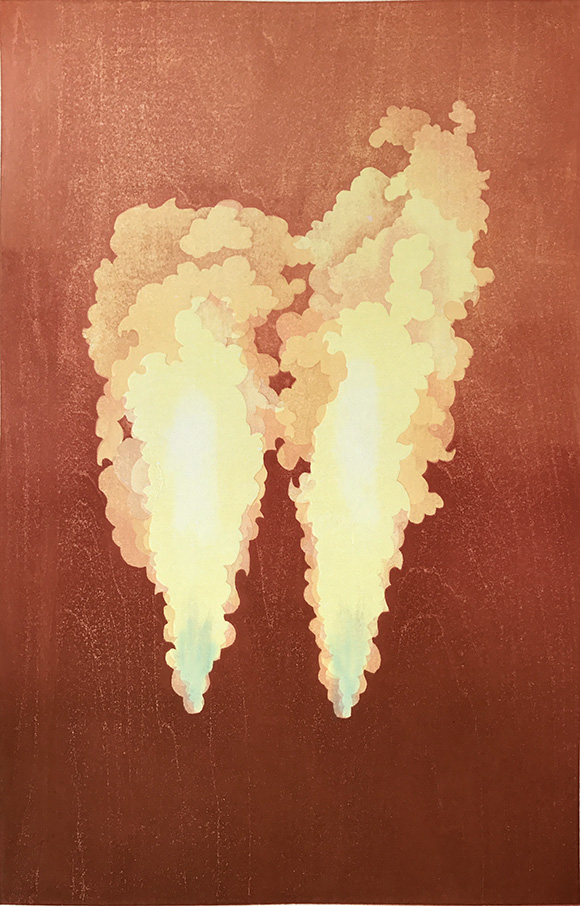 Gas•light [gas-lahyt] verb
To cause (a person) to doubt his or her sanity through the use of psychological manipulation:
How do you know if your president is gaslighting you?

Gas•flare [gas-flair] noun
A gas combustion device used in industrial plants such as petroleum refineries, chemical plants, natural gas processing plants as well as at oil or gas production sites such as hydrofracking operations:
The gas flares, which are bright enough to be seen from space, turned a peaceful little life into a nightmare.

The shapes in this print are derived from a video of gas flares from a fracking well, but I couldn't resist the double-entendre with the psychological term "gaslighting," which is being used often this year as people discuss the condition called narcissistic personality disorder and whether or not the president of the United States suffers from it. Gaslighting is one of the things that narcissists do.

Here are some process photos. 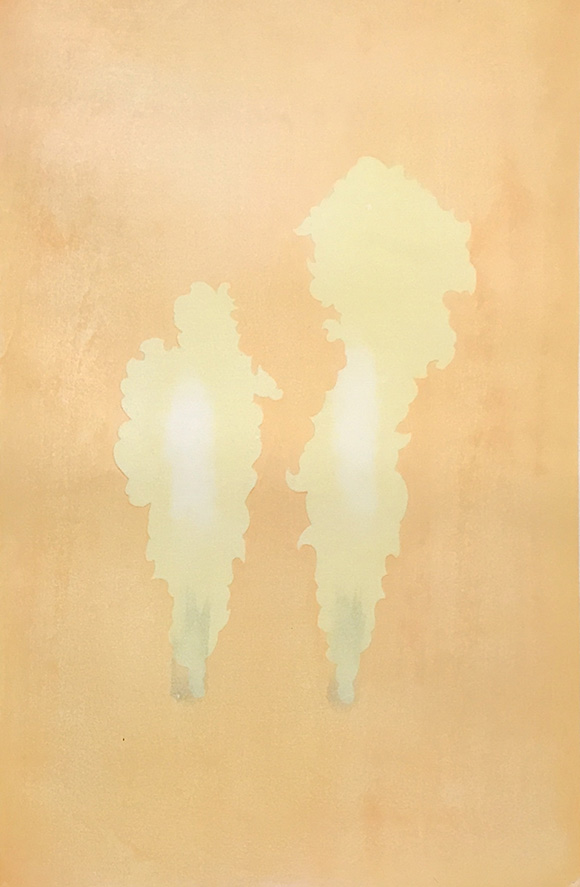 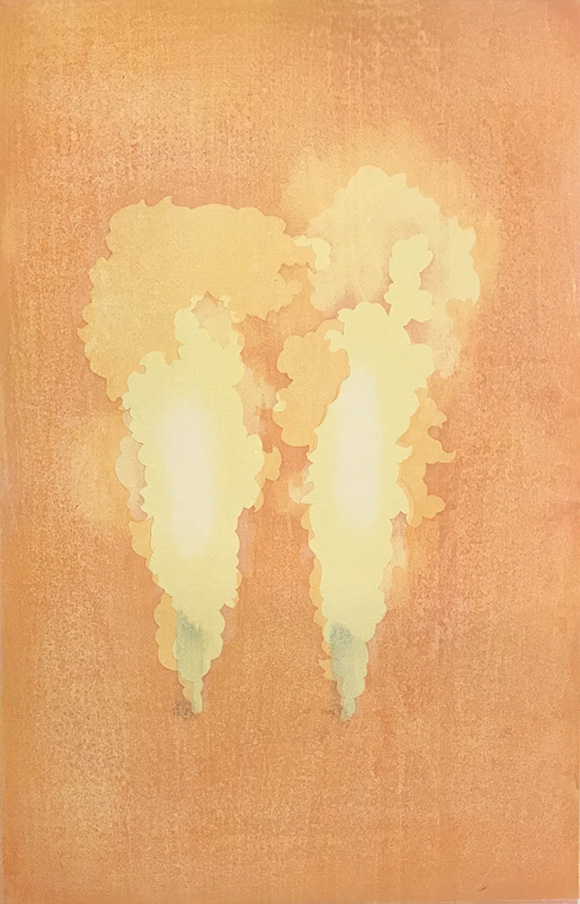 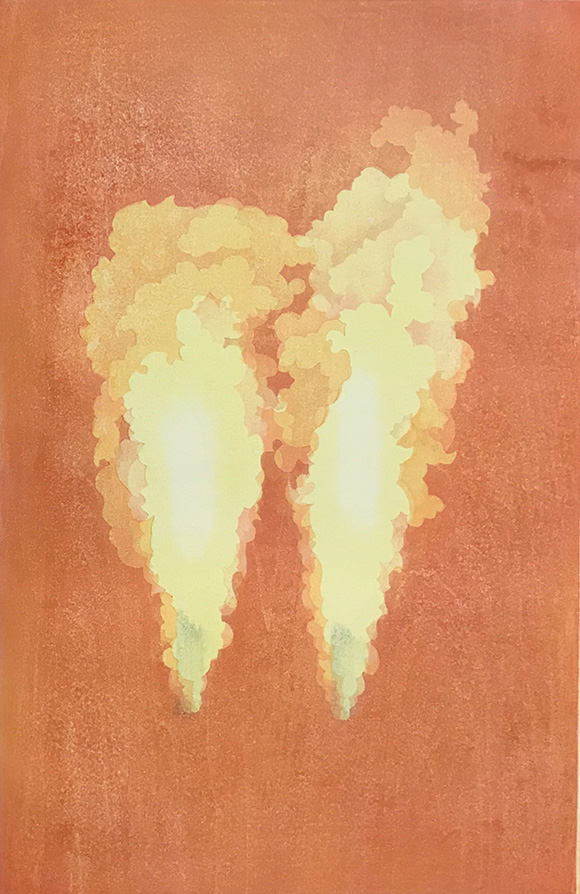 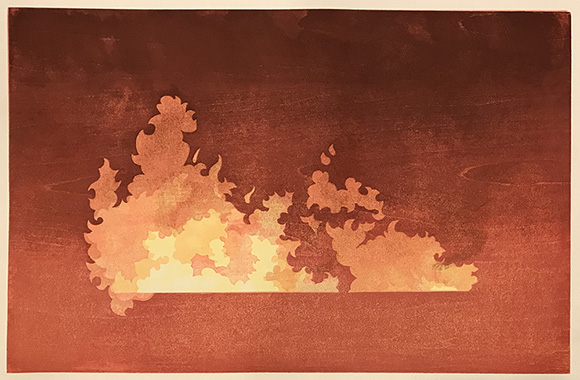 Dumpster fire. Because it is.

The challenge on this print was getting a dirty look. I had a few hair-raising moments getting to the end, so I don't have very many process photos, but here are three. 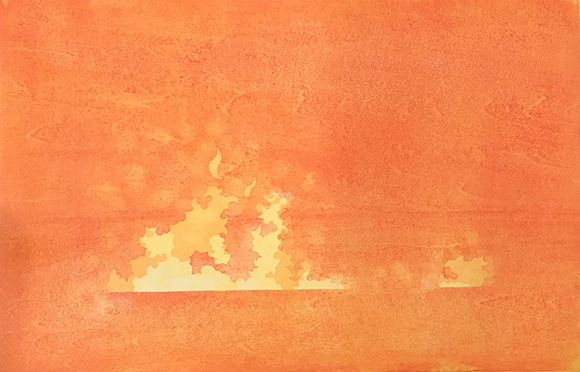 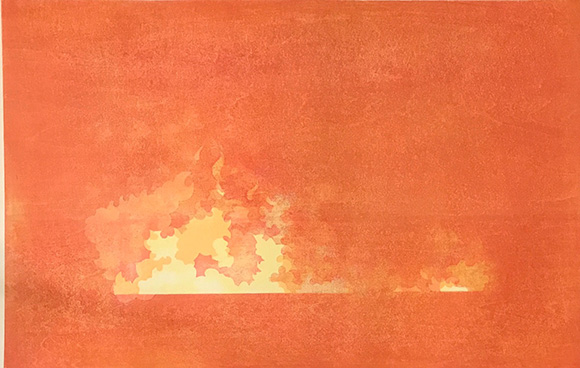 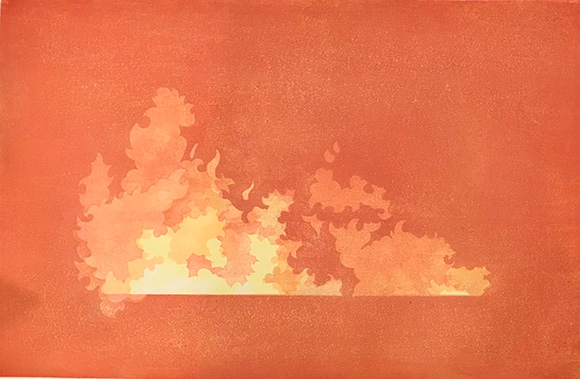 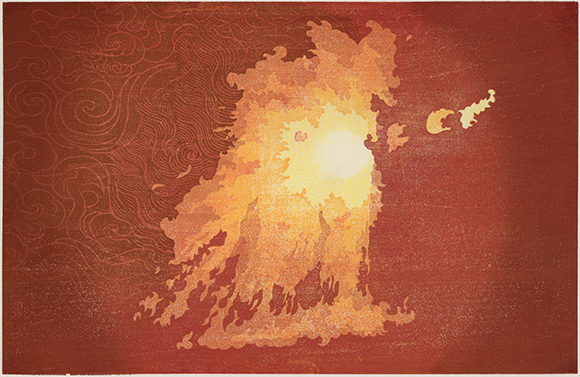 About a week ago, just as I was finalizing this print, I visited the Rubin Museum of Art which specializes in art from the Himalayas and I noticed this descriptive text about a class of Tantric Buddhist deities who are shown as wrathful:


One of these kinds [of deities] includes enlightened beings that assume fierce appearances to remove obstacles or perform other protective functions. Though they may look like demons, these deities are said to be wrathful manifestations of wisdom and method.

When I first proofed the shapes that resulted from superimposing seven stills from a video of a molotov cocktail exploding against a wall, I noticed that they resembled some kind of a cartoon monster. That monster likeness plus my musings on fire and anger combined in my mind with this text and so I decided to mimic the flaming hair and "aura" that I had seen on the wrathful deities at the museum for one last layer.

In my experience, anger is one of the best reasons to do spiritual practices. By spiritual practices, I mean meditation, contemplation, attention to the present moment, lovingkindness, mantra repetition, prayer, and other techniques and tools for focusing the mind and emotions. Last week, Uma Thurmond was asked about recent allegations of sexual harassment and abuse by Harvey Weinstein and others in Hollywood, and her answer was a brilliant display of working with active anger.

I started this series of images about fire in light of my own anger after the election of Donald Trump almost one year ago today. Anger is compared to fire in our language for good reason—although useful, both anger and fire can easily grow out of control and become overwhelmingly destructive. Anger also spreads like wildfire. I believe that anger is the most contagious of all the emotions. Observe what happens in a room when an angry person walks in, or how quickly a small incident on the road can escalate into a full-blown physical confrontation. If you want to offer something of service to the world, learning to manage your own anger is a great beginning.

I’ve spent a lot of this year learning to be responsible about my anger. I don’t think I’ve ever felt this much intense and sustained anger before. Yes, I’ve felt bursts of anger, and even simmering resentments that have lasted for long-ish periods, but never sustained white-hot undiminishing rage like I’ve felt this year. It’s nasty and I don’t like it, but it’s here so I’m trying to learn to handle it and to use the energy for something creative rather than destructive. As we’ve seen this year, watching the white house wrecking crew, it’s much easier to destroy than to create.

This next print is based on eight still frames from a video of someone throwing a molotov cocktail at a wall. Here are the first few color passes.