A River Runs Through Her 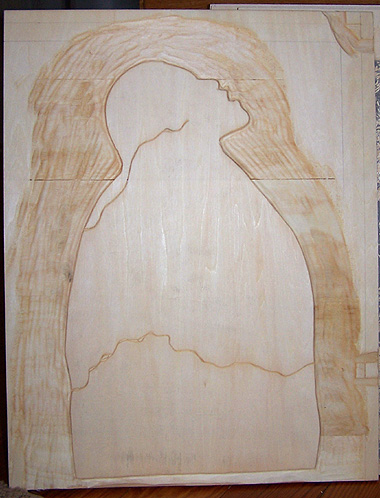 I've had some unexpected free time this week, so I started carving blocks for the Darfur print. Here's the basic form - a woman's body, which will have map elements inside the shape. Notice the horizontal line just below the woman's throat. That's a defect in the deeper layers of the plywood. Fortunately, since this block doesn't involve any fine detail, the defect didn't cause any carving problems for me.

This is the largest block I've used to date, 14" x 18". Any bigger and I'll have to use a different method to duplicate and color-separate my drawings, as my laser printer only prints a maximum page size of 11" x 17".

Email ThisBlogThis!Share to TwitterShare to FacebookShare to Pinterest
Labels: darfur, work in progress 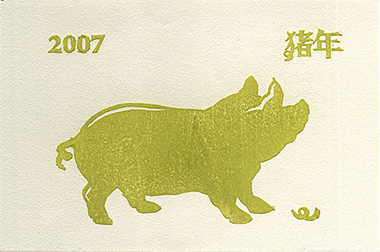 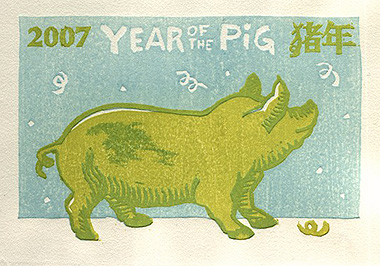 Here's my Year of the Pig print. I used just two blocks so that I could make a lot of prints without driving myself nuts. It was difficult to find two colors that would offer enough contrast, would look good when overprinted, and would still be appealing. Pink plus blue didn't exactly make purple, red plus yellow didn't make a very nice orange. I liked these colors the best, although both of them had to be diluted quite a bit to get a satisfactory overprint. It was an interesting experiment. 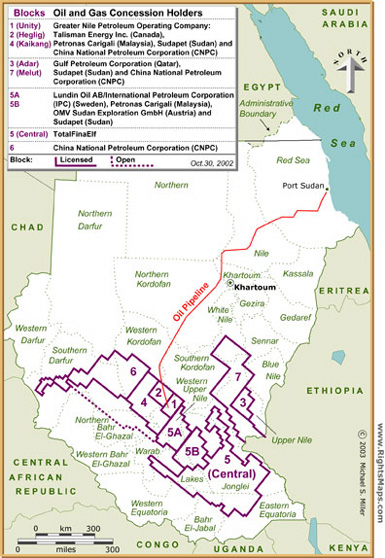 In an earlier post about Darfur I asked for comments and I learned a lot from following those leads. Much of Darfur is desert, making water, grazing areas, and firewood scarce. Some of the conflict is between sedentary peoples (like the Dinka) and Arab nomadic peoples who want to use the same resources.

But there is also oil in Darfur, and judging from the number of companies involved (see map above) it looks like a lot of oil. It's likely that the longstanding tribal struggles over limited natural resources are being cynically used by the Sudanese government and other entities to clear the area for other uses including oil production.

I want to somehow allude to these forces in my print. 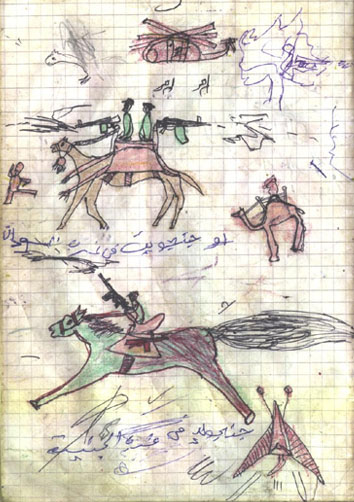 I'm still researching the situation in Darfur with the aim of making a new print on the subject. Today I discovered a powerful collection of children's drawings on the Human Rights Watch website. There are very few photographs of the janjaweed, and photos of attacks on the villages are generally after the fact, so the children's drawings actually serve as a report on the atrocities that are being committed by the janjaweed and by the government soldiers.

As I research, I'm finding myself especially drawn to the experiences of Darfurian women and children.

Japanese Printmakers In Portland OR

Print by Kyoko Sakamoto Japanese Printmakers - Contemporary Woodblock Prints December 6, 2006 - December 31, 2006 First Thursday Reception, December 7, 6 to 9 pm An exhibition of 15 contemporary artist/printmakers from Japan opens today at Waterstone Gallery in Portland, Oregon. The exhibit was curated and hand carried to Portland by teacher and artist Tosai (Richard Steiner). Included in the show is one of my favorite Japanese woodblock artists, Kyoko Sakamoto. More of her work can be seen here (scroll down). 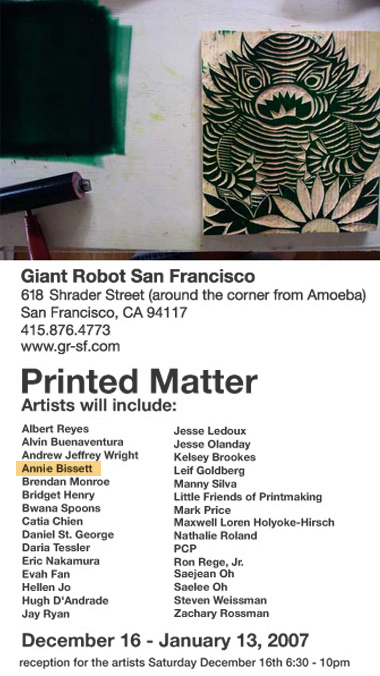 Last week I shipped out five of my prints for a show called "Printed Matter" at Giant Robot San Francisco. The show will be up from December 16 to January 13. Unfortunately I won't be able to get to the December 16 opening, so please take some pictures for me if you go!