Last year I got acquainted with Northern Print when my "Mixed Feelings" prints were shown at the International Print Biennale they hosted, so I was delighted when they got in touch to see if I'd be interested in participating in their new collaborative print project called "Scrum Down, Print Forward." As you can probably tell by the name, the project centers around the 2015 Rugby World Cup which is being hosted in multiple venues in the UK. This international print collaboration will attempt to break the Guinness world record for the world’s longest single linocut print, a record currently held by Kansas City artist Laura Isaac and colleagues. Once the lino is cut and pieced together it will be printed on Sunday 11th October in Newcastle upon Tyne by actual rugby players using a scrum machine as a kind of steamroller.

The panels for the 33 meter print (108 feet) were designed by UK illustrator Sara Ogilvie and are now being carved by artists from 11 print studios, representing the 11 UK World Cup host cities. You can see large views of these panels on the Scrum Down, Print Forward Facebook page.

Set within the design are 20 rugby ball shapes of lino, one for each of the competing nations. These will be designed by artists from each nation and I've volunteered to design the ball for the USA. Unfortunately, the deadline is too tight for me to receive the linoleum, cut it, and get it back to Newcastle in time for the event, so Northern Print has offered to do the cutting there based on my sketch. This is a new experience for me, to have studio assistants!

So I chose the fabled American Jackalope.

Along with the sketch, I sent this statement:


There’s nothing quite as American as a tall tale, and one of the best known U.S. mythical creatures is the jackalope. The word jackalope is a combination of two words: jackrabbit (a type of hare) and antelope (actually a pronghorn). First seen in the American west, jackalope are athletic, fast and aggressive. Willing to use their antlers to fight, they are sometimes called "The Warrior Rabbit.” Jackalope are difficult to capture, but occasionally you can catch one using whiskey as bait.

Not being much of a sports team follower, I have just this week learned that the U.S. men's national rugby team is nicknamed the Eagles. So may I say, "Go Eagles"!

And may I also note that I see something just a tiny bit Donald Trump in the way those antlers fall down over the rabbit's face. But there I go again…
Posted by Annie B at 11:03 AM No comments: 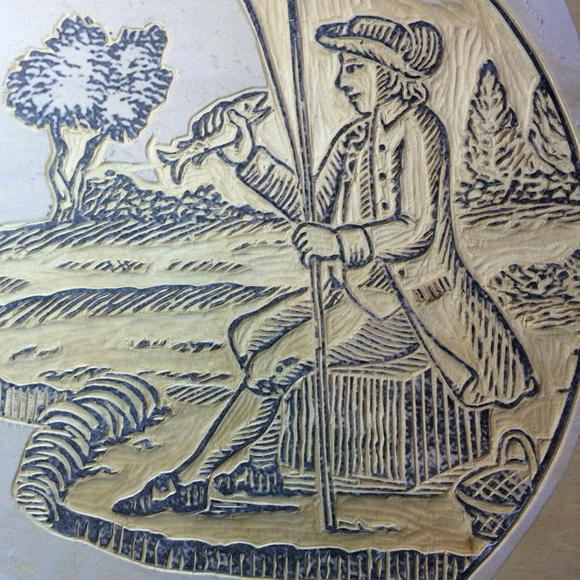 The next print in my Almanack series begins with this carving of a man fishing. The image comes from a book by Thomas Dilworth called A New Guide to the English Tongue, published in Philadelphia in 1770. It's a grammar and reading textbook and this picture, which I'm cropping and reproducing at a scale of about 500%, was used to illustrate a fable called "The Fisherman and the Fish" in which a captured fish asks to be released, promising that she (yep, the fish is female) will come back and allow herself to be caught when she's grown larger. The fisherman says no, and the moral of the fable is "Never let go a Certainty for an Uncertainty." I'm sure this is good advice for someone, but not for an artist.

I will be pairing this image with another quote from The New Book of Knowledge (1767):


The Horizon is a Circle that divideth the Part of the World seen from the Part that cannot be seen.

As you may notice about these colonial era images I'm working with (it's impossible to not notice, really), almost all of the images feature white males. This isn't surprising given the context, but it makes working with the images take a certain direction. Although it wasn't my intention as I began these prints, whiteness has become one of the themes in this project.
Posted by Annie B at 5:11 PM No comments:

While reading April Vollmer's new book about mokuhanga, I noticed that when talking about an artist she would often mention that artist's lineage: where and with whom they studied. Lineage seems to be an especially strong concept in the east. For example, the form of meditation that I practice, which began in India, proudly traces a multi-generation lineage of teachers. Perhaps because mokuhanga was transmitted through a system of apprenticeship for most of its history, the role of the teacher/master is very important and students consider themselves to be lifelong students of their particular teacher no matter how adept they become.

So I got to thinking about my lineage. I learned mokuhanga from Matt Brown, a New Englander like myself, at a workshop here in Massachusetts. I call Matt my teacher, and will continue to do so, but the truth is it was a three-day workshop and that was the extent of my formal training. The rest I learned on my own and with some help from the online Baren Forum, started in the 90s by David Bull.

Matt, too, is mostly self taught. He started making woodblock prints in the early 1990s and learned mostly through books, like Walter Phillips' Technique of the Color Woodcut. Matt cites David Bull, who is a mostly self-taught English-born Canadian living in Japan, and an artist named Bill Paden as people from whom he learned a great deal. Of Paden, Matt writes,


"Bill Paden died on August 6, 2004. He was a hanga woodblock printmaker from way back, having studied moku-hanga in Japan during the Sixties. He lived in New York City for many years and taught at NYU. He knew an enormous amount about hanga printmaking. He was a very generous personality and loved to share knowledge about hanga. He wanted to be sure we all did things the right way."

Realizing that I might be able to trace my own mokuhanga lineage further, I got to wondering about Bill Paden and how he learned the craft, so I turned to Google. Bill Paden was born in Indiana in 1930 and lived in Japan from 1960-65. In Japan he met Clifton Karhu, another American from the midwest (Minnesota), who taught Paden mokuhanga. Since Bill Paden taught in New York, many current practitioners studied with him, including April Vollmer and Joseph Vorgity. (Joseph Vorgity and I are some kind of mokuhanga siblings, since we both studied with Matt Brown.)

So what about Clifton Karhu? The most thorough biography I can find is at the Verne Gallery web site. Karhu was stationed in Japan after WWII, left, was ordained as a Lutheran minister in 1955, then returned to Japan as a missionary and Bible salesman. He grew disillusioned with being a missionary in Japan (who wouldn't?) and relocated to Kyoto in the early 1960s, where he painted and then learned to make woodblock prints. The Ren Brown Collection web site has a wide range of Karhu's prints if you'd like to see some.

Karhu seems to have been quite a character. He was known for the fact that he always wore traditional Japanese attire as well as for his woodblock prints, and the legend is that the Japanese said Karhu was more Japanese than the Japanese. As is often true of westerners who learn mokuhanga, Karhu chose to depict idealized Japanese subject matter in his work. An excellent and lengthy 1986 article from the Los Angeles Times quotes a number of Japanese artists critiquing Karhu's work:


"Karhu's technique is excellent, but it is essentially decorative," says Tetsuya Noda, a prize-winning print artist who combines photographic processes with woodblock printing. "When Americans get to like Japan, that's the sort of pictures they make." Hisae Fujii, curator of prints at Tokyo's National Gallery of Modern Art, agrees: "Karhu's pictures are good to look at when one is tired, but they do not stimulate us to look into the future."

Not the most glowing reviews, but Karhu was very successful and sold a lot of prints. The only reference I can find about Karhu studying with any particular printmakers in Japan is in the LA Times article, which notes that gallery owner Tetsuo Yamada first pointed out to Karhu how well the bold lines and colors in his paintings would do as prints and taught him how to make them. More often cited as a mentor to Karhu is Stanton Macdonald-Wright, a California painter who ended up in Japan in the 1960s and taught Karhu color theory. So my mokuhanga lineage seems to stop at Clifton Karhu. I am amused, but not surprised, to discover that my lineage includes only western autodidacts like myself. And I notice with less amusement but no surprise that it only includes men.

And so I offer a hearty thank you to Clifton Karhu, Bill Paden, David Bull, and Matt Brown. I owe you! And if you have any further information for me on any of these artists, please let me know!
Posted by Annie B at 12:09 PM 2 comments: 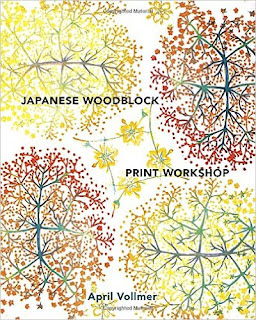 Maintaining sensitivity to materials is the one essential key to using this technique successfully.
-April Vollmer

Three years in the making, mokuhanga artist April Vollmer's new book, Japanese Woodblock Print Workshop, is a comprehensive and beautifully illustrated overview of the process of making a Japanese style woodblock print. Compiled especially for use by creative artists outside Japan, the book contains chapters on the history of the Japanese woodblock print, an introduction to the tools and materials, step by step instructions, examples of contemporary work (including my own), and a comprehensive list of suppliers.

There are a couple of other English language books about mokuhanga that are already available, most notably Rebecca Salter's 2001 book Japanese Woodblock Printing and The Art and Craft of Woodblock Printmaking (1999) by Kari Laitinen, Tuula Moilanen, and Antti Tanttu. Both of these books offer excellent and thorough discussions of technique and should be part of every mokuhanga printmaker's library. What Vollmer's book provides, however, is a particularly American approach that resonates with my own teaching and working style. She presents an art form that is traditional and laden with historical and cultural complexity and makes it approachable and accessible for artists outside of Japan who do not have the luxury of studying with Japanese masters and who are more familiar with Western printmaking. Vollmer always describes the Japanese way of doing things, but she then offers workarounds if the materials are difficult to find where the artist lives and works. As she says in the book's introduction, it is "written with the belief that this flexible technique can be adapted for use by individual artist-printmakers. With experience, artists can develop an approach to woodblock printing that reflects their particular situation, technical ability, and available resources."

I like to say that mokuhanga is simple but not easy. I compare it to learning a digital drawing or painting application, such as Illustrator or Photoshop: an artist can usually make something satisfying on the first attempt, but it can take many years to truly master the program and many artists never take full advantage of all the possibilities. Mokuhanga is like that, and Vollmer highlights the elegant simplicity of the method, thus making the technique accessible, while inviting us to step into a deeper relationship with it by touching on the complexities and myriad possibilities, both in words and by showing inspiring examples of work by contemporary artists.

Japanese Woodblock Print Workshop is a wonderful book in which I'm proud to be included, and which I will be recommending to my own workshop students. It's available from most booksellers and also from McClain's Printmaking Supplies.