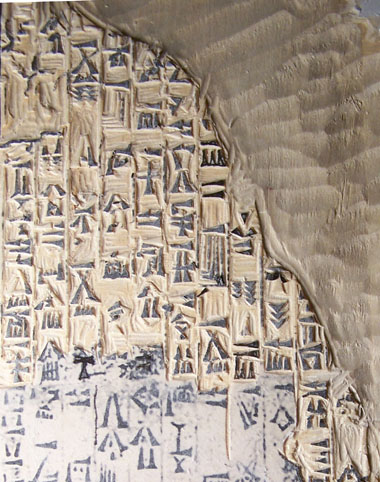 The bottommost portion of the print (see sketch in my last post) will be filled with cuneiform writing. I carved the outline of the area first, did the rough clearing, and then pasted a xerox of the writing onto the block for the fine carving work. This is almost crazy, to carve this, but I want cuneiform writing at the bottom of the print, so carve it I will.

It is one of man's curious idiosyncrasies to creat difficulties for the pleasure of resolving them. (Joseph deMaistre, 18th century philosopher) 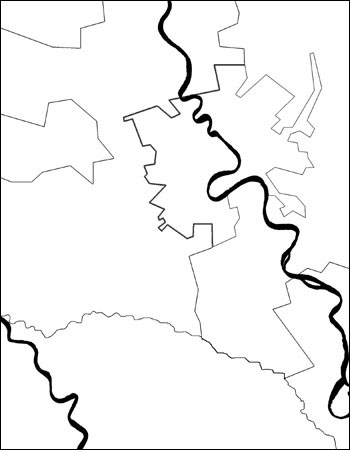 These are the basic areas of the Babylon map that will contain some of the patterns I posted earlier. I plan to carve some cuneiform writing in the section at the bottom of the sketch. The shape that straddles the Tigris River, near the center of the print, is the outline of modern Baghdad. The other areas will be carved in patterns from various time periods. I'm hoping that this arrangement will convey both a sense of historical time and also the idea of disparate "tribes" all existing together in a small area. I've carved a few blocks into these basic shapes and now need to transfer the patterns to these blocks for further carving. 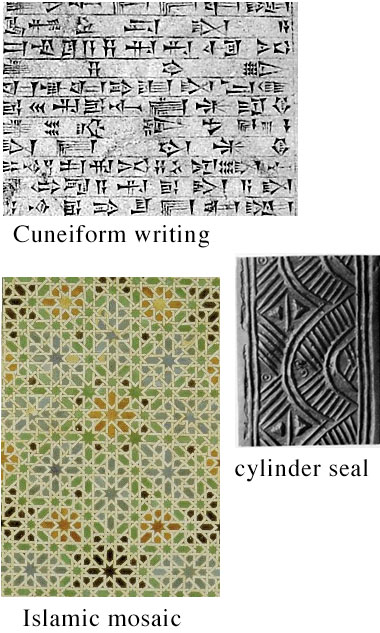 I'm now calling the Iraq print the "Babylon print" because I'm interested in the ancient cultures from the area between the Tigris and the Euphrates and the ancient city of Babylon was just 50 miles south of Baghdad. I wanted to find visual motifs spanning the many thousands of years of cultures that have occupied the area and the items above are the patterns I think I'll be using in this print. Cuneiform is the earliest form of writing known, invented by the Sumerians of Mesopotamia who wrote on clay tablets using long reeds. It was originally a picture language (like Chinese characters) but when the Semites (Assyrians and Babylonians) who later came into the area adopted it, they changed it into a syllabic alphabet. Also used on clay tablets were cylinder seals, which were rolled into the clay to create relief designs. (Perfect for a woodcut.) I also want to include a more "modern" Islamic motif in this print, and I like this mosaic pattern.
Posted by Annie B at 9:21 PM No comments:

The Magic of Maps

We human beings are always making maps. It's not just those drawings that we scribble on the backs of envelopes to show a new friend how to find our house, but in our own minds, in our own ideas about who we are and where we belong, we make maps. We carry mental maps of our neighborhoods, of our city, of our country. And not only places, but we even carry mental maps of things like our circle of friends and how they overlap, maps of our own personal histories and timelines, maps of our inner feelings, our sense of our bodies. One of my favorite books about maps is You Are Here by Katherine Harmon, published by Princeton Architectural Press. Subtitled "Personal Geographies and Other Maps of the Imagination," the book is a wide-ranging collection of inventive maps of all sorts, maps of places both real and imagined. My newest print, a map of The Cradle of Civilization, begins with the Tigris and Euphrates Rivers. I used a brush and some Sumi ink to draw the lines: 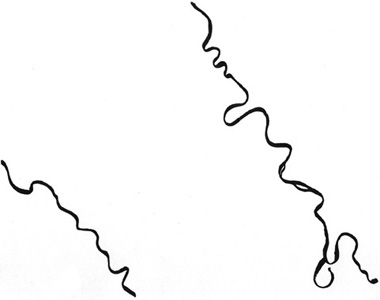 A Print for Iraq 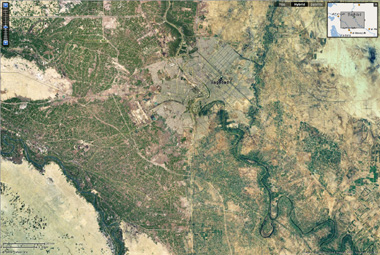 I've been wanting to do some kind of print about Iraq, so I've been making an effort to become more visually literate about that part of the world, looking online at various motifs, designs and photographs from the many cultures that have existed in what we now call Iraq. Last week I stumbled across some online satellite views of the area between the Tigris and Euphrates Rivers, an area that includes Baghdad. When I was a kid I learned that the area between these two rivers is called "The Cradle of Civilization," for it is here that archeologists have identified the origins of agriculture, writing (cuneiform) and civic law (Hamurabi's code) -- beginnings that shaped and informed all of later Western culture. When the U.S. invaded Baghdad in 2003, one of the things that really disturbed me was the lack of foresight that allowed the looting of an estimated 10,000 to 15,000 artifacts from the National Museum in Baghdad. Obviously, there are a lot worse things going on in Iraq than lost artifacts, but there's something about bombing and pillaging the very place where civilization was born that strikes me as a very very bad idea. So I think this print will be a map of the Cradle of Civilization. I have quite a love/hate relationship with maps after many years of painstakingly producing maps in my work, but I continue to be fascinated by maps. I like the view posted here, so I'll use that as a starting point.

I've been laid up this week with a bad case of poison ivy that I must have picked up while out walking the dog. It's on my face and way too close to my eyes for my liking. I decided to try to take my mind off the infernal itching with some Internet surfing, and found the web site of the Tokyo International Mini-Print Triennial. Sponsored by Tama Art University, this triennial is an invitational print competition and literally thousands of the prints have been digitized for online viewing. You can look at the prints by artist name, artist location, print type or subject. I can personally vouch for the fact that viewing these prints will provide hours of relief from whatever ails you.
Posted by Annie B at 1:08 PM 3 comments: 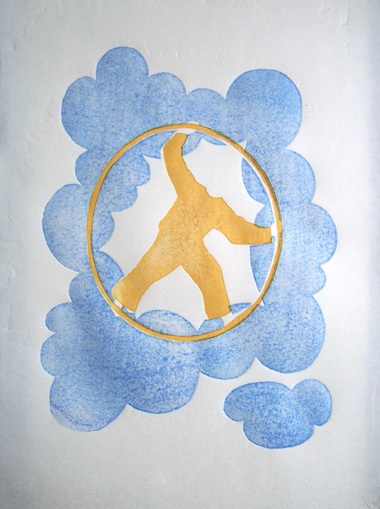 Of the four tai chi prints this one has been the easiest to print. Above you can see the first two passes. Next I added an orange overprint to get a patterned costume: 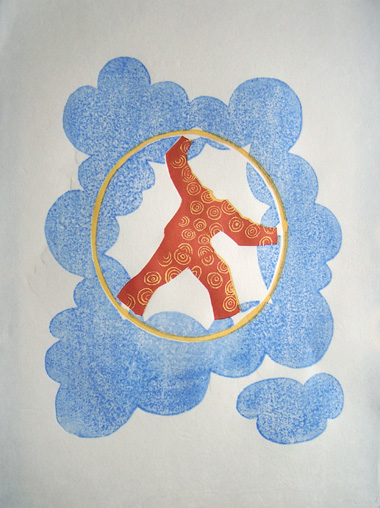 I like to go from light to dark, so I waited until this point to add the loopy linework. You can probably imagine that I held my breath as I printed the first one... 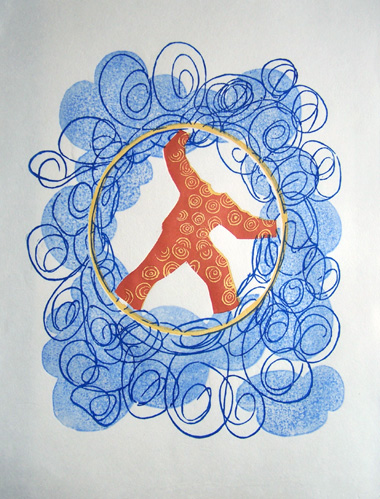 ...and I loved the results. There's some embossing in the paper from the thin ridges of wood, so in real life the lines look a bit like I drew them with a ballpoint pen. The block is a little off-register, but I kind of like it that way. Here's the final with the black added: 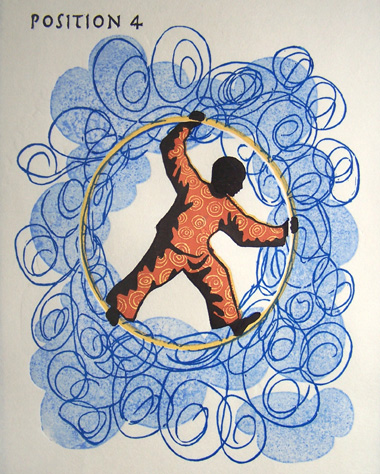