In 1637 two Plymouth Colony men, John Alexander and Thomas Roberts, were brought to trial and found guilty of performing ongoing homosexual acts with each other. Although by law homosexuality was punishable by death, the two received less severe punishments. (Apparently Massachusetts magistrates have always been soft on gays!) John Alexander, a free man, was whipped, burned on the shoulder with a branding iron, and banished from the colony. Thomas Roberts, an indentured servant, was whipped and returned to his master but forbidden to ever own any land within the colony.

In a way, one could say that their trial and punishment was a blessing of sorts. The court records "immortalized" the two, allowing us in the 21st century to at least know the existence as well as the names of two Puritan homosexual lovers at the founding of our nation.

I'm glad I went ahead and reprinted this piece a second time as I like it much better in green.
Posted by Annie B at 2:52 PM 12 comments:

baren - a disk-shaped pad for pressing paper when making a print from a wood block
suji - line or stripe
Today I wanted to make some kind of glow around the "S" of the branding iron before I apply the black to this print. On the first version I used some white ink in an attempt to create a glow:

It came out so-so. This time I wanted more than a glow. I wanted to show some movement and a hotter feeling. Now that I have this nice orange happening in the new color scheme, I thought I'd make the glow more orange colored. And I thought of using the baren suji technique to create the motion:

I was able to achieve these marks using a ball-bearing baren, pulling in just one direction rather than the usual circular rubbing motion. Other types of baren will make other kinds of marks. The technique is similar to trace monotype, I guess. You apply ink in the area where you want the marks to be (in this case I used a flat uncarved block) and gently rub with the baren. I found that using a bit more water than usual and thinking of it as "drawing" with the baren rather than "rubbing" gave me the effect I was looking for.

As several commenters have noted, the carved words in the background are much more visible in this version of the print and that makes the additional black graffiti seem unnecessary. I'm pretty sure I'm going to omit it.
Posted by Annie B at 1:32 PM No comments:

Today I added 4 more layers to the print: a darker green, some gray bokashi on the left and right sides, the skin tones, and orange for the flame-like lotus along the bottom of the men's robes.

This shot was taken at night under artificial light, so the colors aren't accurate, but you get the idea. I definitely like these colors better than the previous version.
Posted by Annie B at 8:45 PM 6 comments:

The first thing I wanted to do with this re-working of the John Alexander and Thomas Roberts print was to "queer" the colors. A friend on Flickr commented that she thought the red (pink) and blue I used on the first version spoke of gender, which I can see. But to me it read as all-American, red white and blue.

It made me think about what "queer" colors would be. I used to be assistant art director at a weekly magazine called PC Week and the editors there consistently vetoed any graphics that didn't use "business colors." Business colors consisted of dark to medium blues, dark or teal greens, deep indigo, and reds if they were deep and cranberry. All pastels were refused as were lavender, orange, pink and yellowish greens. To me the term "business colors" was always code for "manly colors" and I figured that pastels, lavender, orange, pink and yellowish greens were "queer colors."

So I'm going queer with these colors. I started with a lavender tinted blue under the cloud:

Added some pink and orange:

And then laid down a yellow-green background:

I think this looks pretty queer so far.
Posted by Annie B at 6:19 PM 8 comments:

The Woodcuts of Andrea Rich 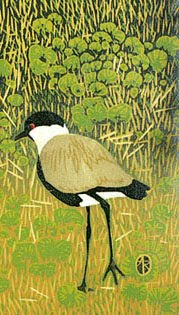 This Sunday June 27 New Englanders will have an opportunity to meet California woodcut artist Andrea Rich who will be visiting the Mass Audubon Visual Arts Center in Canton MA, just south of Boston.

I first encountered Andrea's work through the online woodblock group called the Baren Forum and was instantly smitten with her lovely and detailed depictions of wildlife. She has traveled extensively in her commitment to observe and render the birds and animals in their natural habitat. In this time of environmental uncertainty and upheaval, Rich's work seems especially relevant.

As promised, I'll show you the print of John Alexander & Thomas Roberts that I finished and hated:

It's been nearly 2 months since I added the final black layer and a lot has happened in between -- mostly moving to a new house and studio. I thought that maybe I'd come back to this print after these few weeks and see it differently, but I still don't like it. I don't like the colors (too red white and blue) and I also don't like the black lettering that says "God said: Death to the Faggits (sic)".

That lettering is taken directly from a letter that was sent to the Episcopal Church Diocese of New Hampshire in 2003 when openly gay priest Gene Robinson was elected bishop. I have to admit that carving the lettering was very therapeutic. There's so much emotion in the way the text was written. It was written with what was apparently a ballpoint pen, the lines thickened by scribbling the same lines over and over again. My hands literally shook as I carved -- I could feel the anger and hatred in the letterforms as I carved this person's handwriting and it was frightening to recreate it.

I'm glad I did that carving. There was something powerful for me in facing this person's hatred and letting my own hands recreate it. I felt like I was defusing a bomb. But I don't like how it looks. It's too much. It doesn't need to be there in this print.

So out it will come. I have 16 new sheets of nishinouchi ready to go and I'm going to print these blocks all over again. But first, I have a wedding to go to -- my nephew Chris! See you next week...


Added later: I'm getting some feedback that the "death to the faggits" text is strong & powerful and that I should leave it in. What do you think?
Posted by Annie B at 11:04 PM 9 comments:

The Smell of Sumi Ink

This weekend I finished the wedding woodblock prints for my nephew's wedding. I bought some square glassine envelopes at PaperPresentation.com and I love the way the little prints look in the envelopes. There will be one at each place setting.

I printed these with sumi ink and by the time I finished all 125 prints the odor of the ink had permeated my studio. Sumi has a very distinctive smell, a little like moth balls and a little like patchouli. The students at the last class I taught asked me about the odor, so I finally looked it up. It seems that in addition to soot and animal glue, camphor and/or musk oil are also often added to liquid sumi ink. One web site I consulted suggested that this is done to aid in achieving the meditative state required for good calligraphy or sumi-e painting.

Next on my studio task list: re-do the John Alexander & Thomas Roberts print.
Posted by Annie B at 8:41 PM 3 comments:

Late last month, Cullom Gallery moved to a new building in Seattle’s Nihonmachi (Japantown). The inaugural exhibit, called "Japanese Prints: Tradition & Influence," shows traditional Japanese prints from the 19th and 20th centuries alongside prints by contemporary artists who have been influenced by the styles and techniques of traditional Japanese printmaking. In the exhibit, gallery director Beth Cullom has paired my woodblock print about the suicide of Dorothy May Bradford alongside an 1885 print by Yoshitoshi, Moon of Pure Snow at Asano River, which depicts the suicide of a woman named Chikako.

Read more about the show on the Preview: The Gallery Guide web site.
Posted by Annie B at 4:08 PM 10 comments:

On Saturday I participated in a panel discussion at the Eric Carle Museum of Picture Book Arts in Amherst, MA, and after the panel I spent an hour in the museum's art studio demonstrating the Japanese woodblock technique.

The panel audience was fairly small, but I was delighted when Connecticut printmaker Melody Knight Leary introduced herself to me before the panel began. We've had an online relationship for over a year but had never met in person, so seeing her was a surprise and a real treat.

For the demonstration, I pulled out a set of 3 small blocks from 2005 that I used for the print called "Breathing Buddha." Back then I had done the print in greens and blues so I decided it would be fun to do the reprint in golden summer colors. Here's a shot of the old and new versions.

I'm glad I chose very simple blocks, as most of the observers in the demonstration space were children and their parents. The Eric Carle Museum is a gorgeous building in a stunning natural setting and I enjoyed my time there.
Posted by Annie B at 5:25 PM 2 comments:

My nephew Chris and his longtime girlfriend Heather are getting married in a couple of weeks. They used a black and white damask motif for all their invitations and stationery, so I thought it would be nice to make a little woodcut based on that pattern that could be given to guests as a keepsake.

Here's the happy couple. Now in their mid 20s, they met in high school, so we've known Heather for a long time. She already feels like part of the family but we're thrilled to be making it official. Lucky for us they don't read my blog, so I can show you everything.

I set up my little carving easel and both of my bench hooks, as I wasn't sure what height I'd want to set the block at. I ended up using the smaller bench hook (left).

Here's a closeup of the block with the computer-composed sketch pasted on. Usually I use wheat paste to glue the sketch to the block, but I happened to have some rice paste left from a class I was teaching so I used that this time. I won't do that again, as the rice paste didn't seem to have as much strength as wheat paste. The paper peeled too easily just from the pressure of the knife blade. I had to be more careful than usual.

Here's the block all carved and ready to print.

I slipped here at the end of the job and had to do a repair. I use Super Glue as it doesn't soften when wet.

By the end of the carving session the studio barely looked messy. I guess it's because this block is only about 5 x 5 inches. A nice small project for a studio "test drive."

As usual my studio assistant Ty was unperturbed by wood chips falling on the floor or on him.

Tomorrow I'll try out printing.
Posted by Annie B at 5:38 PM 9 comments: