Some Progress Between Holidays 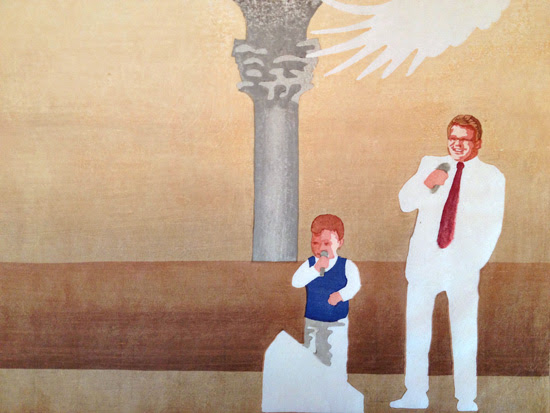 I squeezed in a little more studio time during this week between Christmas and the new year. Managed to print the two characters’ hair, the pastor’s tie, and the boy’s sweater-vest.

I also carved the text that will be included on this print -- written in my best childish scrawl. Next week I'll finish the print by printing black. I'm going to try mixing a chromatic black rather than using straight sumi ink. I find that the sumi offsets when used on large areas like the pastor’s suit. Plus, a chromatic black is a little bit “softer” than a true black. 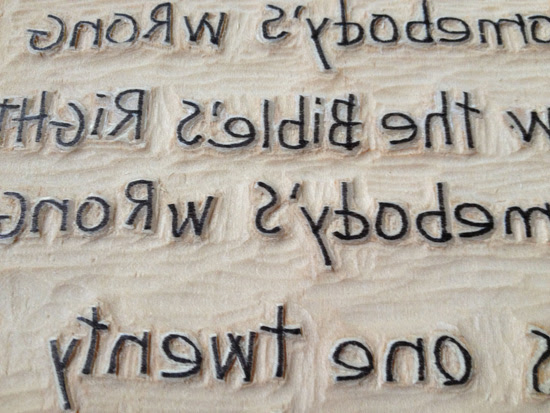 If you look at the video (see previous post for background) that this print is based on you’ll see that it's taken from a distance and at a pretty low resolution. This makes it difficult to see the features on the boy and the preacher. I particularly want the preacher’s face to be very clear, because I’m essentially indicting him and he’s a very specific person. He’s Pastor Jeff Sangl of Apostolic Truth Tabernacle Church in Greensburg, Indiana. So I went to the web site of that church and got some better reference photos to work from.

I then started a new block and did the faces using the reduction method -- carving a shape, printing it, carving some more, printing again with a new color, etc. Here are photos of the three stages. 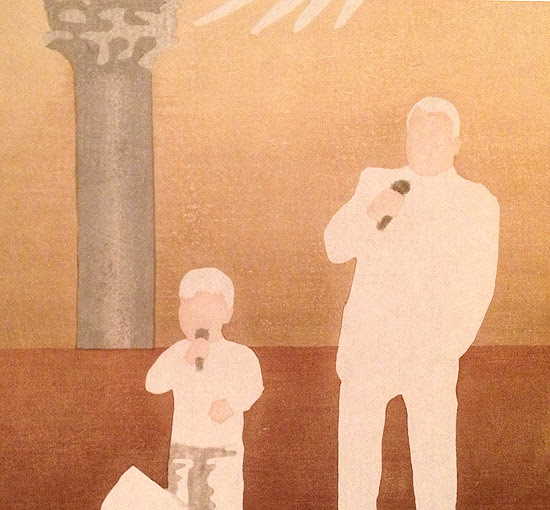 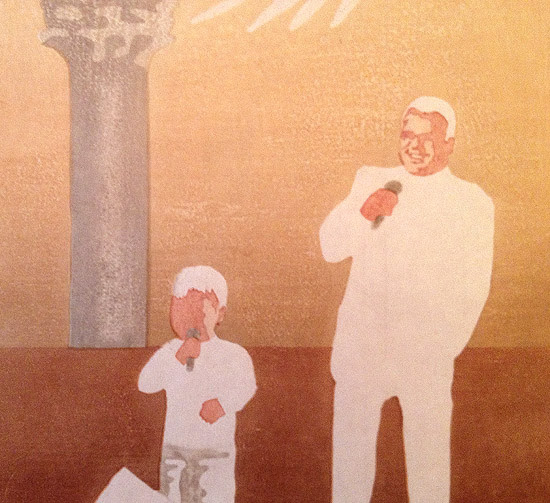 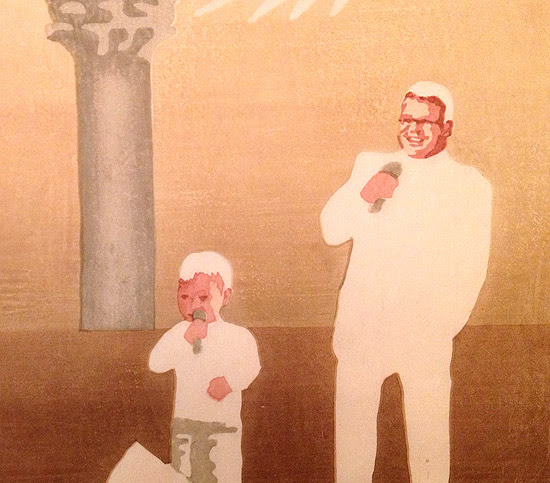 You can see that I also did some work on the pillar in the background. More to come, of course.
Posted by Annie B at 6:39 PM 3 comments:

There are an enormous number of people—and I am one of them—whose native religion, for better or worse, is Christianity. We were born to it; we began to learn about it before we became conscious; it is, whatever we think of it, an intimate belonging of our being; it informs our consciousness, our language, our dreams.     ~ Wendell Berry


Like most gay people, I grew up in a heterosexual family and in a heterosexually-oriented society. I learned the same lessons that most Americans in my generation (late baby boomers) learned about homosexuality -- that it’s a sin, or a sickness, something to be ashamed of, something to hide. I learned those lessons way before I had enough consciousness to reject them. This learning process, where GLBT people learn to hate themselves, is sometimes called “internalized homophobia.”

I also grew up attending a mainstream Protestant church. Again, I learned about God and Jesus well before I had enough capacity to question the things I was learning. Even though I rejected Christianity as a young adult, it’s the faith of my childhood. Just as when I lived in an adobe house in New Mexico I continued to dream about New England colonial buildings with attics and basements, my psyche is still full of the language and the mythical templates of Christianity. I am and will always be a cultural Christian, whatever I think about its validity as a religion.


I have no idea if this print (or any of the prints I create in the next few months) will actually make it into the book I'm planning, but this print is where I have to start. It's an ugly print, based on an incredibly ugly video that went viral this past spring, where a young child who can’t be more than 5 years old is coached to sing a song with the refrain “Ain’t no homos gonna make it to heaven.” I hate this image, but it perfectly encapsulates the struggle with internalized homophobia that I’ve experienced in my life. And it also represents pretty perfectly the fact that the loudest voices against homosexuality in America for the past few decades have been the voices of the most passionate followers of Jesus.

Here’s the video, from a church in Indiana. Brace yourself...

Email ThisBlogThis!Share to TwitterShare to FacebookShare to Pinterest
Labels: Ain't No Homos, Christianity, GLBT, God Is My Witness, printmaking, woodblock

Sort of a Book

It seems like forever since I’ve made a real print. Except for the update to “Sometimes I'm Married” and some fooling around during my home-made artist’s residency, I think it’s been about three months since I finished the “Mixed Feelings” prints in the Loaded series. Not that I haven’t been thinking about what’s next. I've thought about it a lot. I’ve known that I want to try a new format, and I’m pretty sure that I know the topic, too.

Regarding format, I’ve been wanting to try making a book. But I’d have to charge a gajillion dollars for a hand-bound book made of woodblock prints, so that’s not going to work unless I can get a grant or something to do it. But then I thought I could make large enough editions of each print that some can be bound into a book (maybe a small number like between 5 and 8 books) and still plenty will be available to sell as individual prints. I’m thinking I’ll increase my edition size from the usual 8 to 10 to something more like 20. Then, in the end, I’ll also create a Blurb version of the book that can sell for more like $50-ish. So that’s the plan.

Then there’s the topic. I think this is what’s been holding me back so long. I’m a little afraid of my topic. Not that that’s bad, but it’s caused me to procrastinate.

There's an artist named Marshall Arisman who is very well known in American illustration. I don't actually like Arisman's work. It's way too dark for me. But I respect his long career and I once heard him speak some wisdom at an illustration conference. Arisman says that for work to be powerful and effective you have to make work about things you have actual knowledge of, whether it’s bowling or guns or dogs. He says you’ll always make better art when the subject matter is meaningful to you.

So I'm going to go for the subject matter that is the most meaningful to me: gays and god. I know a lot about both, having been raised in a Christian Protestant church, “born again” in adolescence, and rejected from that fundamentalist community when I came out as gay. Being mystical by nature, I spent many years exploring other kinds of spirituality and religion, studied a lot of eastern philosophies, and I've most recently returned to liberal Protestantism in a kind of reclaiming of my heritage. Which I view as a radical and political act as well as spiritual.

I’ll be telling the story more fully as the work progresses, but for now I’m ready to begin making the first image. I had thought of calling the series “Homos In Heaven” but my mother really hates that title and I do respect her opinion. We’ll see what evolves.
Posted by Annie B at 3:58 PM 5 comments: