For My White Line Woodcut Students

I’m putting this post together for some upcoming classes at Zea Mays Printmaking and Pyramid Atlantic Art Center and in it I’ll be showing a few examples of white line prints to help students prepare images for the workshops.

The white line woodblock method was founded in the early 1900s in Provincetown, Massachusetts, by a group of artists who were interested in Japanese printmaking but grew tired of the tedium of cutting a block of wood for every color as that method demanded. These Provincetown artists, including Blanche Lazzell and Edna Boies Hopkins, developed a way to make a polychrome print from a single block of wood.

In the white line method, a simple line drawing is incised on the block with a knife or gouge creating v-shaped cuts, which become white lines when printed.


Once the outlines are carved, small areas are hand colored one by one with watercolor paint and brushes and hand printed, usually with a wooden spoon, until the print is complete. Blocks can be re-used to create another print, but every print will be unique because of the variations in paint application.


Below is a gallery of contemporary white line prints showing a range of the kinds of prints that can be made with this method. Note that although white line woodcuts have historically been figurative, since they are drawing-based there is no reason why they cannot be as abstract or expressive as any other form of drawing. Your sketch just needs to be simple enough to transfer to a block by tracing with carbon paper. (Or you can draw directly onto the block.) 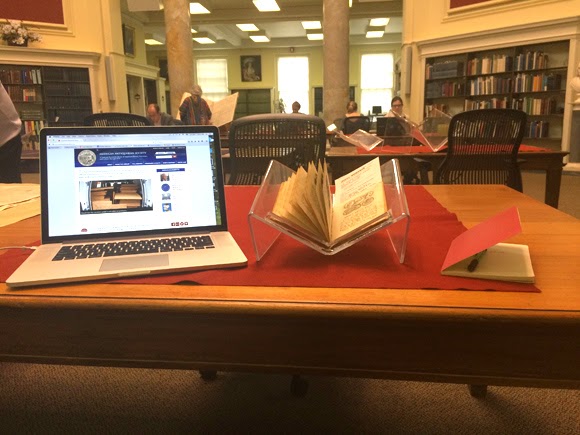 My mind is still reeling from the month of study I just spent at American Antiquarian Society (AAS) in Worcester, Massachusetts. If you're familiar with my work, you know that I often incorporate historic references into my projects, so I was thrilled to receive the 2015 Jay and Deborah Last Fellowship for Creative and Performing Artists and Writers, granting me four uninterrupted weeks of research with the assistance of AAS staff.

Founded in 1812 by Revolutionary War patriot and printer Isaiah Thomas, the AAS is a national research library whose mission is to “collect, preserve and make available the printed record of what is now the United States from 1640 through 1876.” According to this article, the AAS has twenty five miles of shelves, which hold over four million items including books, pamphlets, broadsides, newspapers, periodicals, sheet music and graphic arts materials.

My stated fellowship project was to conduct research about the spirituality/religiosity of American national identity, particularly looking at early American woodcuts and engravings. I wanted to find visual materials which demonstrated the presence of religion in the development of our national identity, a presence which I thought would be subtle and understated. What I discovered is that there are very few colonial printed images that do NOT contain religious references. I looked at children’s primers, almanacs (including several almanac diaries), juvenile literature, type specimen books, and a few hymnals and broadsides. It was not necessary to dig for religious references -- there was a sort of generic Protestantism present in almost every genre.

All that material (I took almost 1,500 photographs and downloaded scores of PDFs) is still sifting through my mind, but I'm very sure it will emerge in my work. I just ordered some washi (Japanese paper), and soon the process will begin.

I just finished teaching a two-day moku hanga (Japanese style woodblock) workshop at Zea Mays Printmaking and I wanted to show you the great prints that my students were able to complete in just two days.