If you're in the D.C. area over the Thanksgiving holiday, please join me for an artist's talk at Charles Krause Reporting Fine Art on Friday evening, November 28, 2014, 5:30 to 7:00 pm. I'll be talking about my 26 "Secret Codewords of the NSA," which are part of a group show there called "Lines Drawn."
Posted by Annie B at 1:34 PM No comments: 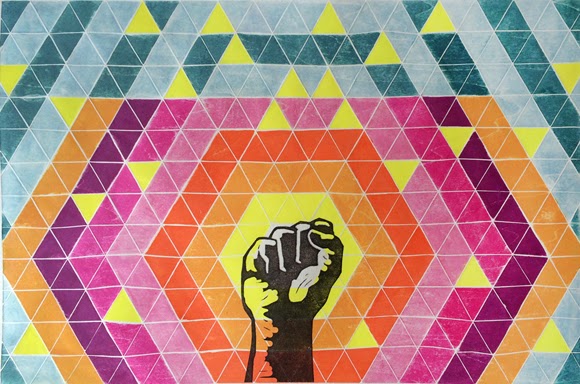 The Gay Liberation Front (GLF) lasted only a few months but it was a major turning point in the approach to American gay rights and, although the GLF was short lived, it spawned many other groups. The GLF grew directly out of the Stonewall Riots in 1969 and harnessed that energy as well as taking on some of the tactics of the civil rights and peace movements. They attempted to address a broad range of social and political issues: racism, war, and capitalism and as well as attacking traditional gender roles, challenging the notion of the nuclear family, and advocating sexual liberation. As happened with Occupy Wall Street in this decade, the GLF fell apart when members were unable to agree on operating procedure.

This print was created using the same matrix used for Accommodate (DOB) and Masquerade (Mattachine).
Posted by Annie B at 4:55 PM 2 comments:

Email ThisBlogThis!Share to TwitterShare to FacebookShare to Pinterest
Labels: gay history, God Is Our Witness 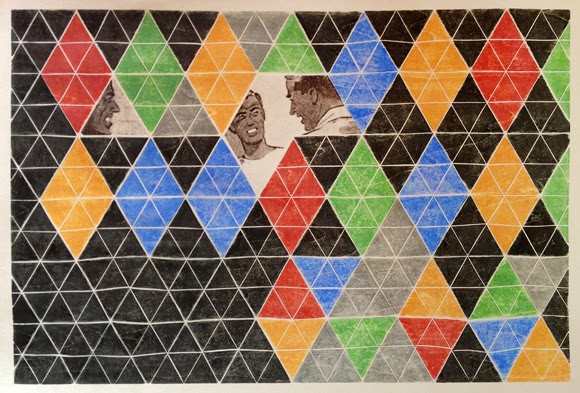 The first 'homophile' group in the United States was the Mattachine Society, founded in 1950 in Los Angeles by Marxist political activist Harry Hay and a small group of his friends. Given the anti-homosexual and anti-communist climate in the U.S. in the 1950s, anonymity was integral to the group during its formative years. (You can see the FBI's files on Mattachine here.) The name, Mattachine, came from a French masque group called the "Société Mattachine." As Hay related to Jonathan Katz in the book Gay American History,


These societies, lifelong secret fraternities of unmarried townsmen who never performed in public unmasked, were dedicated to going out into the countryside and conducting dances and rituals during the Feast of Fools, at the Vernal Equinox. Sometimes these dance rituals, or masques, were peasant protests against oppression—with the maskers, in the people’s name, receiving the brunt of a given lord’s vicious retaliation. So we took the name Mattachine because we felt that we 1950s Gays were also a masked people, unknown and anonymous, who might become engaged in morale building and helping ourselves and others, through struggle, to move toward total redress and change.

The Society's stated goals were to bring together homosexuals isolated from their own kind; to educate society toward an ethical homosexual culture paralleling other minorities; and to assist victimized gays. Like its sister group, Daughters of Bilitis, Mattachine Society chapters were loosely affiliated under a national umbrella, but functionally autonomous, and chapters cropped up across the country. The Society struggled, as the LGBTQ community still does, with the sometimes conflicting goals of celebrating gay sexuality vs. seeking acceptance and respectability. The Society lasted in one form or another into the 1990s, but in the late 1960s they began to be seen as too traditional and not willing enough to be confrontational.

Although contemporary LGBTQ people mark Stonewall as the beginning of gay liberation, the Mattachine Society, and to a lesser degree the Daughters of Bilitis, had already been engaged for two decades in a struggle against police raids, entrapment, censorship, criminalization of sexuality, and labeling by psychiatric organizations.

I used the same matrix for this print as I used for the previous Daughters of Bilitis print.
Posted by Annie B at 3:28 PM 2 comments: