Edna Boies Hopkins (1872-1937), a protege of Arthur Wesley Dow, created a large body of woodblock prints until her career was cut short by severe arthritis when she reached her early 50s. Although she is best known for her prints of flowers, I'm smitten with some of her figural works like the white line print above. It's so easy to overwork lines in a woodcut, so I like the way Hopkins' line retains the quirkiness and character of a hand drawn line. I've been thinking that I'd like to try using the white line method in some of my commercial work.

Email ThisBlogThis!Share to TwitterShare to FacebookShare to Pinterest
Labels: other artists, white-line woodcut

In traditional Japanese woodblock prints, a keyblock was often used. The keyblock was usually a black outline of the artwork to which all of the color blocks were registered. This third reduction of the block in my Bethlehem print is acting as a sort of keyblock in the sense that it gives the piece its definition. I used a very red purple color which came out more violet when it overprinted the blues underneath.

One more block to carve and print. This will be a border that I'll cut on a fresh block.
Posted by Annie B at 7:49 PM 6 comments:

I've had so much illustration work to do the past couple of months that this print has had to take more of a back seat than I'd like. But I'm plugging away at it. Of the 3 "birthplaces" prints (Bethlehem, Mecca and Lumbini) I chose to do Bethlehem first so that I would be working on it during the Christian season of Advent, the four weeks before the celebration of Christ's birth on Christmas. I do expect to have the print finished by then.
Posted by Annie B at 4:50 PM No comments:

Early last week I cut the index finger of my left hand rather badly. I'm quite careful when handling woodcut tools, but I'm very cavalier about x-acto knives. Holy cow, those things are sharp! I was cutting a mat. More proof that matting and framing should be left to the professionals.

Anyway, my finger is on the mend and I was able to fit in a printing session on Saturday. Above is the next layer on the Bethlehem print. I've left the full border visible so you can see the little notches I've cut in the paper for registration.

I think this is all I need to print with this state of the block, so it's time to carve again for the next reduction.
Posted by Annie B at 4:39 PM 10 comments:

I took some time this morning before work to do the last section of the second round of cuts for the Bethlehem print. Not sure when I'll have the opportunity to print again, as I have a lot of illustration work to do. Maybe toward the end of next week I'll be able to make some time.
Posted by Annie B at 7:02 PM 1 comment:

Knowing of my love for maps, a friend from Baren Forum, Sharen Linder, recently alerted me to The Festival of Maps Chicago, a city-wide celebration of maps that will be going on for the next couple of months. The Field Museum is having a huge show of maps titled Maps: Finding Our Place in the World which explores the history of wayfinding across time, space, and cultures.

Other participating institutions include The Adler Planetarium (Mapping the Universe) and The Chicago Botanic Garden (Rare Maps: Journeys of Plant Explorers), among many others.

I think a trip to Chicago is in order!

print by Sharen Linder: phone book map in chine colle under an etching
Posted by Annie B at 10:33 PM 2 comments: 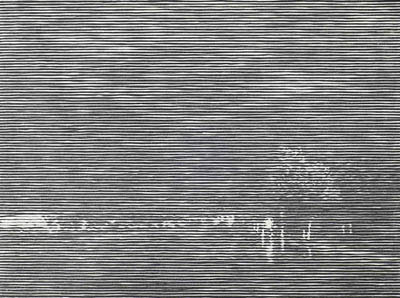 Back in the 1980s when I was first learning to use the computer to draw (Adobe Illustrator Version 1.0), I would lie down at night after a long day on the machine with strange visions of manipulating time and space as I fell asleep. I would see the world before me begin to get larger and larger, as when zooming in on the computer screen, or I would watch as an imaginary scene would dissolve into overlapping colored shapes. It was as if my mind was continuing to explore the mesmerizing new world that had been opened to it even as I slept.

Twenty years later we've all seemingly become accustomed to the mesmerizing world inside the screen-window, but I don't believe it's any less mesmerizing than it was back then. I can still "lose" hours at a time while pursuing a topic on the internet, or futzing around with a thorny software problem, and I still have trouble talking on the telephone if I'm sitting in front of a computer screen. And I see myself more and more expecting immediacy -- expecting to find anything I'm looking for, expecting that anything I purchase online will be delivered next day, expecting immediate responses to my emails, expecting immediate feedback to almost every action I take.

Which is why woodblock is so challenging for me. I can hardly think of a more labor-intensive, grueling technique for making a picture. Unlike digital picture-making, where the feedback is immediate and any action can be un-done, a polychrome woodblock print can take many weeks to accomplish, and the unforgiving marks made by a knife on wood are indelible. The contrast is stark. 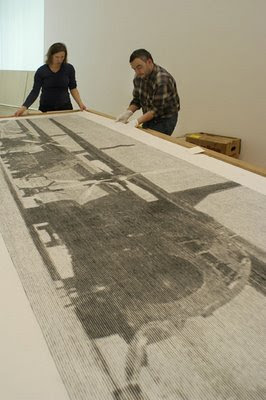 Located just a short distance from New York's "Museum Mile," the Park Avenue Armory is a great location for the International Fine Print Dealers Association's annual print fair. I spent six hours on the exhibit floor on Saturday poring over prints from all eras, from works by Dürer and Rembrandt to early Japanese woodblock prints to hot-off-the-press contemporary editions from well-known publishers such as Crown Point Press and Shark's Ink. I learned a lot about printmaking, saw some knockout woodblock prints up close, and overheard some interesting conversations. Following are some highlights from the day.

Women Who Map
Given my obsession with maps, of course I was drawn to any map-like prints that I saw. Two really stood out for me, the work of Yvonne Jacquette (these are woodcuts):

and the work of Suzanne Caporael:

There were many gorgeous examples of some of my favorite early- to mid-20th century woodblock printmakers from the American northeast, including Arthur Wesley Dow, Blanche Lazelle and others. Most of the lovely little Dow woodblock prints I've ever seen have been very intimate pieces, often only a few inches in size. The piece at the top below was on display at the Hirschl and Adler Gallery booth and was quite large - about 7 inches wide!

The Susan Teller Gallery had a wall devoted to modernist woodcuts by women, and I was delighted to be introduced to the work of Anne Ryan (1889-1954). She made prints on black paper, giving the work great depth and complexity.

A book at the Arion Press booth caught my eye immediately as I walked by, a volume titled "Sampler" which contains 200 Emily Dickinson poems illustrated with images by Kiki Smith. The book was letterpress printed and hand bound in an edition of 400 and it was so hot off the press that Kiki Smith herself had not seen it yet. I was fortunate enough to be present when Smith arrived for her first look, so I was able to watch her face as she viewed the results of many weeks of labor. I think she liked it.

Other Woodcuts of Note

Keith Haring's Totem
This was huge, framed in 3 pieces, maybe 7 or 8 feet tall.

I had just one disappointment, which is that Davidson Galleries of Seattle, although a member of ifpda, didn't attend. They carry some of my favorite contemporary printmakers and I would have loved to have seen some of that work up close.
Posted by Annie B at 10:12 AM 4 comments:

Ten hours of carving, and it looks like I have about 10 hours more to go.

Appropriately enough, tonight in my email inbox I got the latest McClain's newsletter featuring an interview with Northampton's famous engraver, Barry Moser. Asked why he loves engraving, given that he himself describes it as "excruciatingly frustrating" and "relentlessly unforgiving," Moser replied, "I have a tenacious personality. If something pushes hard against me, I want to push all that much harder against it." I can relate to that!
Posted by Annie B at 10:14 PM No comments: