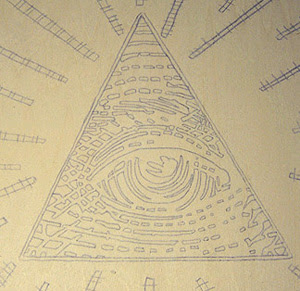 The series about money that I'm currently working on, Loaded, is based on designs found on the back side of a U.S. one-dollar bill and I think it's safe to say that no examination of the symbols on the bill could ignore the Great Seal. Finalized in 1782, the Great Seal is basically the coat of arms of the United States and has appeared on coins, stamps, uniforms, passports and other government issued items. The "front" of the seal shows an eagle bearing a striped shield with the motto "e pluribus unum (out of many, one). The "back" of the seal, an image of an unfinished pyramid topped by "the Eye of Providence," is the image that I'll be working with for this next print.

On this pyramid side of the seal there appear two sets of Latin words. Above the Eye is written Annuit Cœptis, meaning "He approves (or has approved) [our] undertakings", and below the pyramid it says Novus Ordo Seclorum, which means "New Order of the Ages." The pyramid, which appears to be unfinished, has thirteen steps, representing the original thirteen states and the future growth of the country. The lowest level of the pyramid shows the year 1776 in Roman numerals. The Eye of Providence, like the pyramid, can be traced back to Egyptian mythology and the Eye of Horus, as well as Hindu and Buddhist iconography. In Christianity the Eye is usually surrounded by a triangle and is said to invoke the Trinity (Father, Son and Holy Spirit). The implication of the combined images is that Providence, or God, favors the establishment of the United States and will watch over its development.

One of the designers of the seal, Charles Thomson, said this about the pyramid.


The pyramid signifies Strength and Duration: the Eye over it and the Motto allude to the many signal interpositions of providence in favour of the American cause. The date underneath is that of the Declaration of Independence and the words under it signify the beginning of the New American Era, which commences from that date.

The Eye of Providence is a symbol that became associated with Freemasonry in the late 18th century, and conspiracy theorists make the claim that the Eye in the national seal indicates the influence of Freemasonry in the founding of the United States. I did a little research on the Freemasons and as far as I can see the worst fault of the Freemasons is that they don't allow women into the lodges. I'm not sure why conspiracy theorists would dwell on the pyramid and eye, but maybe I'm missing something. If anyone knows more, feel free to enlighten us in the comments section.

Meanwhile, I can think of plenty of other associations that the pyramid might have with our modern day economy, things like "pyramid schemes" for example...

I'm now in the carving stage, which will take a few days.
Posted by Annie B at 5:11 PM

I love this new series. The financial state of affairs is an overwhelming and complex topic. I am glad to see your careful thoughtfulness and artful responses to our national difficulties in your work. Looking forward to more prints!

Each of your 'Loaded' series is so full of meaning - but a strong image in itself. I'm looking forward to seeing how the latest one reveals itself.

Thanks Renee and Celia. It's definitely a rich topic, but so very complicated that I find myself wanting to use simple imagery.