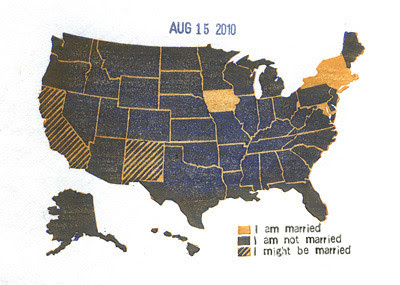 A week ago Lynn and I celebrated our 6th wedding anniversary and today I did this year's installment of the print series I call Sometimes I'm Married. As I've explained each year, I think of these prints as a gradual reduction series examining the state of my marriage. I plan to revisit this print every year around our wedding anniversary until all the states are one color. 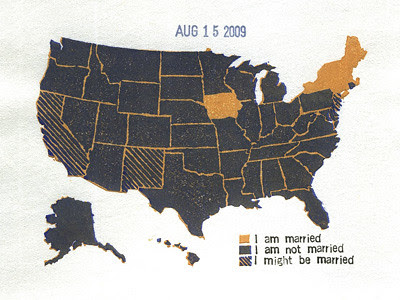 Last Year's Map
This year I re-carved both blocks. One of the little Hawaiian islands had chipped off on the gold block, and the dark blue block had to be re-done to fill Maine back in. I had removed Maine prematurely in 2009 because the state legislature had approved a gay marriage bill which was scheduled to be enacted in August of that year. Unfortunately a group of citizens organized in opposition to the law, got a question on the November ballot, and the law was voted down. Bye bye Maine.

I also changed New Jersey from a maybe to a not. Last year there was some indication that same sex marriages from outside New Jersey might be recognized there, but at this point only "civil unions" are recognized. Since "civil union" is a made-up thing that means something different in each state, I ignore it. This map is about places where I'm married. Looks like I still need to carry my marriage license with me to most places when I travel.

I was pleased to have some company in my studio this morning while I printed. Artist and printmaker Will Tuthill came for a studio visit. We enjoyed meeting in person and talking shop. I especially liked talking about the process of developing an image. We found a lot in common about the ways we work. Thanks for coming, Will!
Posted by Annie B at 8:06 PM

Happy Anniversary! I hope you will be able to carve away all the states next year.

Happy Anniversary, Annie! I really enjoy this print series and thank you so much for sharing! I'm a visual learner and this print really gave me a better insight into the gay marriage issue. It hit home to me how I might feel if my marriage status fluctuated depending upon my location in the country of the "United States". Thanks so much for the opening this up to me.

I love this particular series. It will make a wonderful retrospective when all is said and done (whenever that may be).