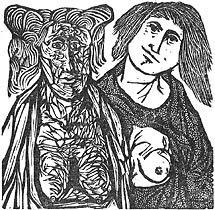 Illustration for A Poem Called The Tunning of Elynour Rummynge
by John Skelton (British poet, 1460-1529)

Sculptor/printmaker Leonard Baskin (1922-2000) was best known for his monumental black-and-white woodcuts and heroic sculptures depicting male figures from biblical and classical narratives. The Smith College Museum of Art in Northampton, MA, where Baskin taught for over 20 years, is about to show another side of the artist in an exhibit called "Medea and Her Sisters: Leonard Baskin's Images of Women." The show runs from June 15 to September 9.
Posted by Annie B at 10:48 AM

Hi Annie,
WOW! Leonard Baskin is my new artist-hero. He really was a rennaissance man. What a great exhibit~enjoy! I'm happy to see even the thumbnails of his work:)
Thanks for posting.

Compliments for your artworks & excellent blog.