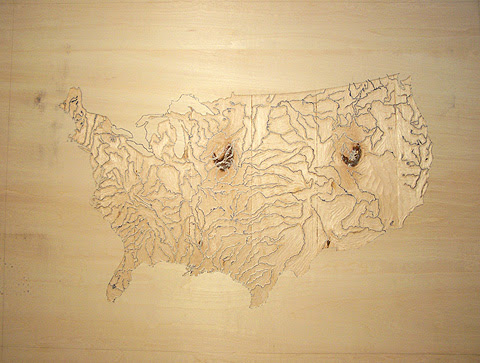 Although I consider the Pilgrim series complete, I can't seem to shake the native American side of the story. The human rights abuses, the broken treaties, the injustices done to North America's indigenous peoples weaves through the entire history of the United States and, in my opinion, taints it. So here I am, back on the topic.

I've begun this print by carving a river map of the United States. Before there were highways, before there were state lines, there were rivers and lakes. Rivers were the highways and the reference points. This is reflected in many native American words, such as the Indian name for my town of Northampton, Norwattuck, which means "in the midst of the river."

This is a large block of shina, 20 x 30 inches, which I purchased nearly 2 years ago for the Vast Unpeopled Lands print. I'm going to attempt to make this print on just one block, so I'll be printing by reduction and by using stencils and masks. Working this way appeals to both my lazy streak and my desire to conserve materials.

You'll notice in the photo above that there are several knots and voids in the underlayer of the plywood. This is an issue that my supplier (McClain's) is aware of and I think they've fixed the problem by now, but if you ever come across knots like this be very careful. The knots are extremely hard and can crack even a high quality chisel. Your tools can also go skittering across the knot before you even know it's there, messing up your intended cutting path.

Luckily for me not too many of my rivers landed on the knotty areas. But below you can see that the Great Salt Lake is squarely situated on a void! I'll have to be careful when printing that. 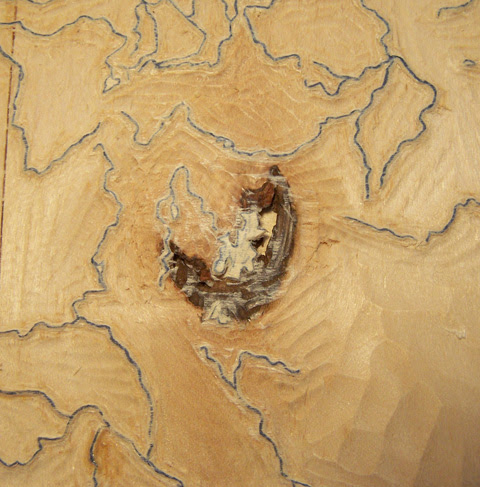 I just got a couple of large commercial projects, so this print may be on hold for a week or so, but I'll update you when there's more.
Posted by Annie B at 5:31 PM

Wood putty, do you think?

love this project! When we take our roads trips, I always right down the name of the river we are crossing. I have looked and looked for a map of American rivers, one that I could take with me.

@Ellen, wood putty is a good idea. I'll give that a try.

@dewatobay, I think a map of just rivers would be hard to find. Maybe there's some kind of atlas of rivers for canoeists? I draw a lot of maps in my life as an illustrator, so one of my favorite games is to get a window seat when I fly and try to identify the rivers.

It is interesting that you say you plan on doing this print as a reduction. I know that moku hanga is traditionally a multi block process. Does reduction Moku Hanga change or complicate things? or is it just like western style reduction?

I think you are right about connecting the rivers to the native Americans. Where I live in Georgia sometimes the only reminder is that we still have the indian names for the rivers. Like the Chattahoochee my local river.

Hi Hannah. Reduction moku hanga is different than western style reduction because the pigments are transparent so you can't just cover up a color you've laid down. You have to think about the colors mixing. That's why I also use stencils too. It's kind of complicate I guess but I find any kind of reduction complicated!

I figured that was the case. The ink being super transparent. But I thought I'd ask anyway, see if you have some hanga secrets.

I need to stop being a chicken and give Japanese style woodblock a go. I am just too worried about messing it up. I guess worst case scenario I just whip out the oil inks and use the exact... same... blocks... I have no excuse. lol

It's understandable that you would want to work more with the Native American theme. It's a RIPE subject that American society has largely neglected. I am excited for your project but am surprised to see a piece of Shina with those knots. I sometimes use scrap wood for my prints (hey, free is free) and I am used to those voids and knots but to have pricier Shina show up with them is disconcerting. The block in the title section of my blog is actually scrap and there was a void right over the Kirin's face. Go figure.
I've been trying to work also with a Native American theme too but have had some trouble. In Virginia the Potomac and James river are of recent interest to me but finding out more about Powatan indian culture leaves a lot to be desired. Seems most of it was annihilated when the Europeans arrived. Sad.

Yeah for reduction printing! :)
Good luck with that knot, I hope it doesn't cause you any problems.