Such A Person I Want to Become 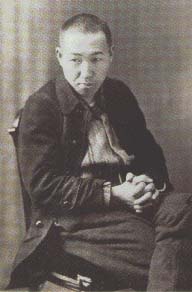 Not long after the triple disaster in Japan, a friend on Twitter posted a link to a poem by a writer named Kenji Miyazawa who lived in the devastated area of Tohoku. The poem, Ame ni mo Makezu (Not Losing To the Rain), was discovered in a notebook after Miyazawa's death in 1933. I was instantly taken with the poem, with its powerful Buddhist emphasis on both compassion and social activism.
I emailed a copy of the poem to my friend Mariko and asked her if she knew it. Silly me! Turns out it's one of the best-known poems in Japan -- Mariko learned it by heart when she was a schoolgirl.

There are a number of translations online, but I especially like this one on Wikipedia which is a fairly direct translation of the Japanese:


not losing to the rain
not losing to the wind
not losing to the snow nor to summer's heat
with a strong body
unfettered by desire
never losing temper
cultivating a quiet joy
every day four bowls of brown rice
miso and some vegetables to eat
in everything
count yourself last and put others before you
watching and listening, and understanding
and never forgetting
in the shade of the woods of the pines of the fields
being in a little thatched hut
if there is a sick child to the east
going and nursing over them
if there is a tired mother to the west
going and shouldering her sheaf of rice
if there is someone near death to the south
going and saying there's no need to be afraid
if there is a quarrel or a lawsuit to the north
telling them to leave off with such waste
when there's drought, shedding tears of sympathy
when the summer's cold, wandering upset
called a nobody by everyone
without being praised
without being blamed
such a person
I want to become
- Kenji Miyazawa

I had been wanting to make a small print that I could bring with me to Japan to give as a gift to people I meet while I'm at the Mokuhanga Conference, so I decided to use this poem as my muse. I asked myself, "Who are my heroes? What kind of person do I want to become?" and my answer was Martin Luther King Jr.

So this is the little 5 x 7 print I made for MLK, such a person I want to become. 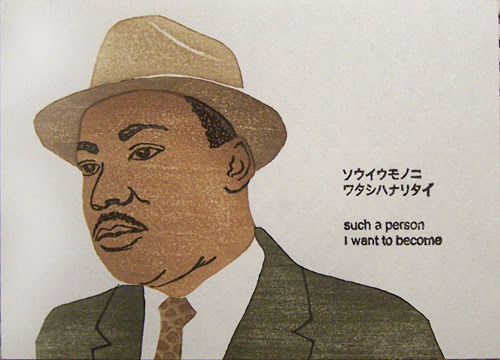 It's a simple print so I won't show you the entire build sequence, but here's one stage that I think made a big difference. Before I printed the final black layer, I tried adding a bokashi (blend) on the upper part of the face to make it look like the hat was casting a shadow on the forehead. I liked how that looked, so I did it on the whole edition. 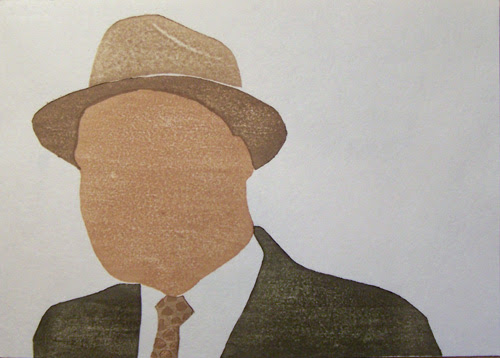 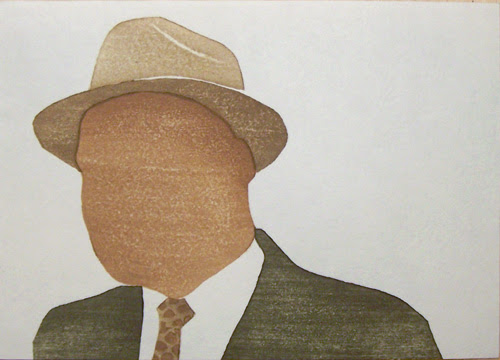 After the bokashi
Posted by Annie B at 11:18 PM

What a lovely poem and post Annie. Those are lucky recipients of your MLK Jr. print. The bokashi is so subtle but adds so much.

Bravo! on your lovely print and Thank you for sharing such a beautiful poem.

Loved the poem and your print as well. I appreciate your genuine expression and homage to the great man.