A Car by Reduction Method

The traditional Japanese method of woodblock printing calls for carving one block for each color, although in practice a printer will often designate areas for more than one color on a block if the areas are far enough apart to be inked accurately. But for the most part, it's one color per block.

As I've begun to work with very large prints and blocks of wood, more and more often I've found myself seeking ways to save money and time by consolidating my materials, and one way I've found to save on wood is to use the reduction method whenever possible. The reduction method involves carving a block, printing that block on all the sheets of paper in the planned edition, then carving ("reducing") the block more, printing again, carving again, and so on until the image is completed.

Last week I started a new print in my "Loaded" series of prints about money, and I'm using the reduction method to create an image of a car that will be central to the print. Below are photos of the first two printed colors from the initial reductions, plus a photo of the block carved for a third time and ready to print. There will be one more reduction after this one. 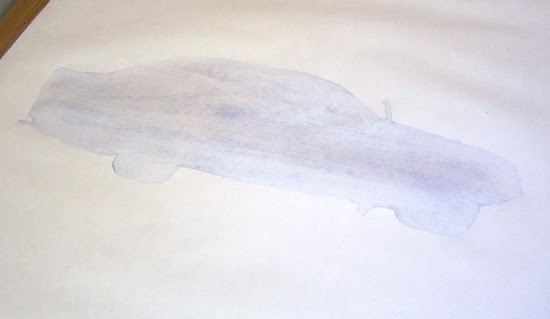 First, a pale blue impression of the whole shape of the car. Then I went back and carved again. 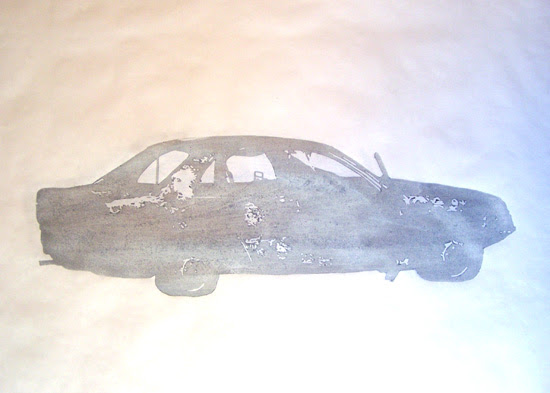 Next I printed a gray layer. 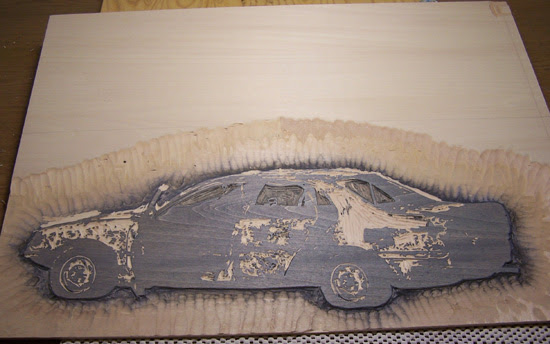 Today I finished the third "reduction" and tomorrow (hopefully) I'll print it using another tone of gray.
Posted by Annie B at 5:33 PM

Very interesting show up in Florence at the Strozzi palace entitled: Money, Art, Beauty and the Bonfire of the Vanities that discusses the rise of modern commerce banking dating from the creation and almost universal adoption of the Florin in 1450 as a internationally accepted form of gold/coin currency and the subsequent rise/invention of banking, international commerce, lending; the concomitant friction caused by anti-usury laws of the Church and the funneling of new found money into art and the church to compensate. The show asserts that the very Renaissance was funded and made possible by the invention of banking and lending and the role of acquired wealth and the tensions it created in the leading patrons of the day.
(Medici, etc.)
The show culminates with the rise of Savonarola preaching that the wealthy and Church were corrupt and had too much power and goading the citizens to a mass burning of the vanities (books,luxury items, paintings, most of the nude studies of most of the active renaissance artists of the day, etc. in the central piazza in 1497. Botticelli was a follower and is said to have thrown paintings and stacks of drawings into the blaze...).The Church and Bankers got uneasy with his preachings..and he was subsequently found guilty of heresy and quickly hung and burned in the same Piazza in 1498.

Some of this should sound familiar.

Looking good so far - look forward to the next layer... What kind of wood are you using?

Andrew, sounds like an amazing show. In my own humble work so far I'm finding that money as a topic kind of naturally sweeps into all sorts of other topics. I'm going to go google this Florence show to see what I can see. Thanks for telling me about it.

Looking wonderful, I'm looking forward to seeing the next layer. I'm working on a reduction print at the moment too, really enjoying the process.

I'm so scared of reduction I haven't tried yet... can't wait to see this finished!