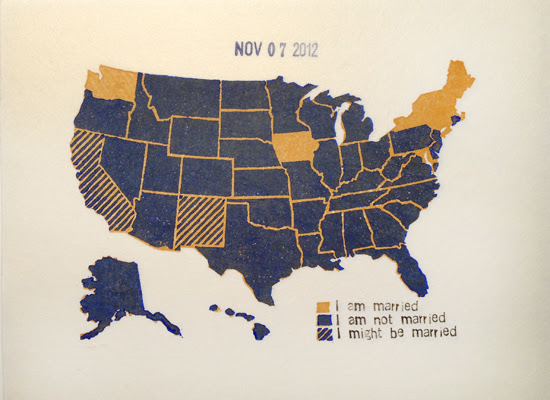 On August 15, 2004, my partner Lynn and I, who had already been together for 13 years, were married in our home in the company of 60 friends and family. This was three months after our right to marry had been affirmed by the Supreme Judicial Court of Massachusetts, which found that there was no “constitutionally adequate reason” for denying marriage to same-sex couples. For the next four years, I was only married in Massachusetts, which made for some interesting (and confusing) situations. Back then, whenever we left the state, Lynn and I would joke that we weren't married any more, but the question of whether or not our marriage is valid when we travel out of state is no laughing matter if something bad happens. (Our lawyer advised us to carry a copy of our marriage license when we travel.)

Finally, in 2008, California (for a brief time) joined Massachusetts in allowing gay marriage, so that year I began making a yearly map of where I am and am not legally married. The series is titled “Sometimes I'm Married” and I've typically made the map on my August 15 anniversary. This year I missed our anniversary, but I'm glad I did because this week turned out to be a better week to make the new map.

That's because this month's election has made 2012 a very good year for my marriage. Earlier in the year, President Barack Obama voiced his support of gay marriage, and the election two days ago yielded three new states where gay marriage is now legal in the U.S. -- Maryland, Maine and Washington. A good year. Perhaps a watershed year. Prior to now, all of the changes to state laws have been either legislated or court ordered, but these three new states were all places where the people voted to allow same-sex marriage. The argument by opponents that if we just “let the people vote” then gay marriage initiatives will fail have been proven false. I think it will still be a long while before the red states stop resisting, but it feels to me like it's just a matter of time now.

I've made a LOT of these maps. If you want one, I'll be selling them this weekend at Print Fair North at Zea Mays Printmaking, and I'll also put them on my web site so you can order them there. Cullom Gallery in Seattle will have a batch of them in stock next week, too.

If you live in Maryland, Maine, or Washington and you voted in favor of allowing gay marriage in your state, please accept my thanks for offering me and other people like me the opportunity to choose to be married. I'm deeply grateful.
Posted by Annie B at 9:23 AM

I've been reading your blog for several years and I love ALL of your work, but especially this series. I'm elated that such progress has been made this year. I hope you're still making these prints and posting them when it's finally nothing but a field of gold. I'll certainly still be reading then. :)

Hi Annie;
I've always liked this print.
It's a great idea; simple and direct and not at all polemical and all the more powerful because of it.
I even like the rubber stamp text.
Glad to see you get this years out with some changes for the better over last year.

Thanks Andrew. I was glad it finally changed a little. I always worry about the backlash (like California Prop 8) but we'll see.