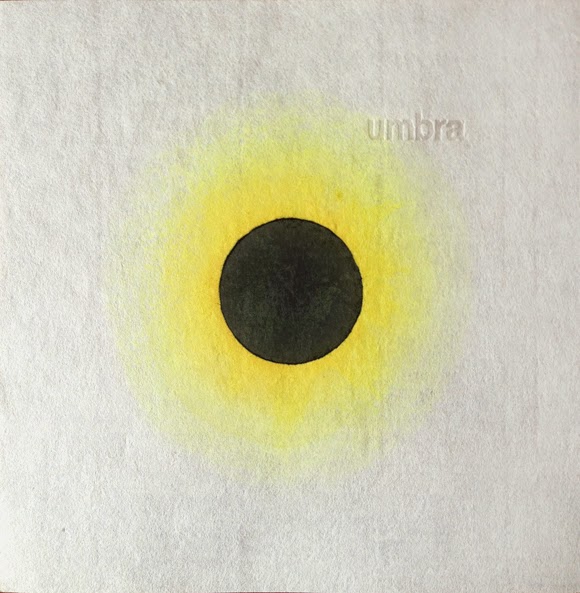 [NOTE: Sorry if this print hurts your eyes a little, but I wanted it that way.]

The NSA's UMBRA is "a retired compartment for the most sensitive COMINT material." In other words, it's a category of secrecy (compartment), now out of service, that allowed people with UMBRA clearance to have access to highly sensitive communications intelligence. Here's an interesting PDF, something about UFOs from the 1980s, that shows how the UMBRA designation would be used in a document.

This is the first retired codeword I've done, but I couldn't resist the power of this metaphor. An umbra is the blackest part of a shadow cast by an opaque object, especially the cone-shaped shadow cast by earth or the moon during an eclipse. This dark shadow is obviously an apt metaphor for the secrecy, the 'dark sites,' and the covert activities that U.S. national security agencies have engaged in at an ever accelerating pace since 9/11/01. But there's another shadow side to America's 21st century security state: it has grown so quickly and become so large and unwieldy that no one, including those inside the NSA, actually knows how much money we spend on it, how many people are employed within it, or which programs are doing what work and how much of that work is duplicated. As for oversight, it's a mess. Over 100 congressional committees claim at least some oversight on NSA activities.

Edward Snowden made such a loud splash with his stolen NSA documents that everyone now knows that the American security state exists. But a recent Frontline documentary called United States of Secrets reveals a depth and pervasiveness to the NSA’s domestic surveillance abuses that I personally found shocking. Long before Snowden, there were a number of government security experts inside the agency who were deeply disturbed by what the government was doing and who tried to do something about it. William Binney, Thomas Drake, Richard Loomis and Diane Roark are just some of the government employees who became whistleblowers after 9/11. The documentary is still available to watch online, plus interviews with the whistleblowers and other background materials if you're interested in digging deep. I think it's the most comprehensive look at the American Security State to date.

As I've worked on this Secret Codewords project, I've also referred to a book called Top Secret America by Dana Priest and William Arkin. Arkin began researching the rising security state immediately after 9/11 when he noticed a rash of new codewords in NSA budget documents. His reporting with Dana Priest appeared in a special report in the Washington Post back in 2009-2010. You can still access it here.
Posted by Annie B at 5:31 PM

One document from the Snowden-leaks surprisingly showed that the UMBRA codeword is still used by NSA. I wrote a blog post about this revelation and the history of this codeword: http://electrospaces.blogspot.com/2014/07/nsa-still-uses-umbra-compartment-for.html

Thanks for your comment, P/K. I read your post about UMBRA and was surprised too. I'm also surprised that none of your articles came up for me while I was doing research for this little Codeword series of prints. Your blog is quite an in-depth look at the revelations that have been unfolding from the Snowden documents.