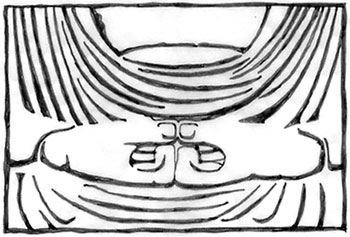 While I was in Japan, Mariko and I visited Kamakura where we saw the famous Kamakura Daibutsu (literally "big Buddha"), a bronze statue that was cast in 1252 AD. I was quite taken with this statue, especially his hands, which rest in a position that is said to represent steadfastness. Knowing the story of the statue, that it used to reside inside a temple until 1495 when a tidal wave destroyed the temple but left the statue untouched, just adds to the sense of changelessness that the figure exudes.

As an American who lives in a country that is not yet 250 years old, I was overwhelmed to stand in the presence of a statue that has sat in the same spot and watched 750 years of Japanese history flow past. It felt more alive than me, just by virtue of its longevity.

I've decided to do a series of small woodblock prints about the Kamakura Daibutsu. Here's the final sketch of the Buddha's hands that will be the key block for the first print.
Posted by Annie B at 9:37 AM

looks like a terrific subject to begin your explorations.


also, I just purchased a book from Amazon on Munakata Shiko, the artist you mention in your previous post. Thank you for the introduction to his work, I was immediately enchanted with the few pieces of his I saw on-line amd wanted to learn more !

Holy Smokes Annie B !!!
This is completely enchanting!
May you continue to be in bliss
throughout your journeys!

Beautiful drawing of the buddha. I am reminded of the work of Un'ichi Hiratsuka, who produced sublime prints in black and white. He also had one particular image of the Buddhist priest Nichiren, and he set out to make ten thousand copies, as worship and as an act of sharing.